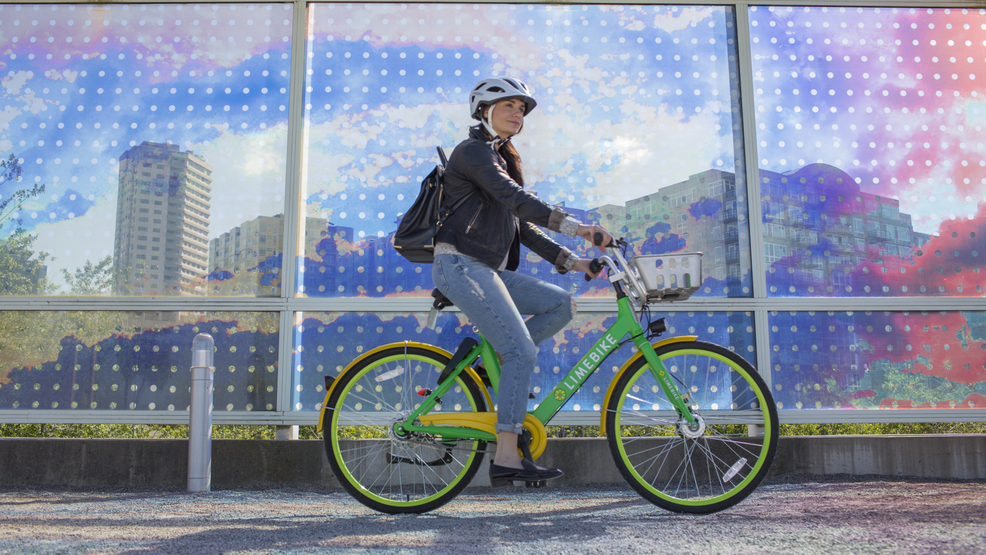 Overall, LimeBike was my favorite due to the sturdier bike and fun features. However, next time I’m out looking for a bike to ride, I’ll snag the one closest to my location. (Photo Credit: LimeBike)
SEE MORE

LimeBike vs Spin Bike: Which one is better?

The lime and orange bikes seem to be scattered everywhere around town. I started seeing them early one morning a few weeks on the way to the gym and wondered what was going on with the bike invasion. Greenlake and Golden Gardens were quickly overtaken with the new bike shares which got me wondering, which one was better? Which bike share offered the better experience?

Additionally, my 5-year-old recently learned how to ride a two-wheeler and has been begging me to go on a bike ride with her. The only problem is my bike is in desperate need of a tune-up so I’ve been holding her off. This past weekend though, we packed up her bike and both of our helmets, as the bike share programs are BYOH (bring your own helmet) for a jaunt around Golden Gardens.

After parking the car, I quickly located an orange Spin Bike. I was prepared to use the app to find a bike but luckily one was literally sitting on the sidewalk when I got out of the car. We strapped on our helmets and I paid for my ride using my iPhone. The process was fairly simple and I was soon taking the orange bike for a...spin.

The basket was a bit hard to get used to as it was fixed to the bike frame and held firm while my wheel turned which meant the basket looked like it was swirling around, but the actual bike felt sturdy and smooth. We rode along the beach and around to the duck ponds before heading back toward the bike path. While the bike was easy to ride on the flat bike path, I could quickly feel how hard it would be to ride up most of Seattle’s steep hills. There are simple gears but these are cruiser bikes which are best suited for flat paths. Once I was done with my ride, I found an appropriate place to park my bike and used the easy bar mechanism to lock the back wheel. Spin encourages you to park your bike in a reasonable location but unfortunately not every user is considerate of where they leave the bikes. I do love that you can practically drop the bike off anywhere without having to find a station. I do not love that you need to bring your own helmet to ride the bike as it takes away from the spontaneity of the bike share system. And helmets are a must. It is the law in King County to wear a bike helmet while riding a bike.

I next snagged a LimeBike and was immediately impressed with the musical tune that played when I unlocked the bike using their app. This bike also felt sturdier - and where the basket on Spin bothered me, LimeBike's basket was great. It didn’t swing around and I felt like my belongings were safe. I headed back along the beach and then down the bike path; the 8-gears giving me a greater range to work with...but I still didn’t feel this was the best bike for hills. LimeBike was extremely smooth to ride on the bike path and basically a really fun bike to take on a ride. I was also worried that the bikes would be too tall for me - I’m barely 5’ 1”, but the seats were easy to adjust. LimeBike had hydraulic seat adjustments which meant the seat easily lifted and lowered. Spin bikes had a more manual adjustment which were a bit sticky to adjust. At the end of the ride, I locked the bike and was greeted with another tune. LimeBike provides you with a long list of appropriate places to park their bikes which I hope encourages users to park them appropriately.

I asked a friend, Anna Berman about her experience riding LimeBike. She hadn’t been on a bike in years but with the encouragement of a friend, rented a bike. “Seeing LimeBikes while walking around green lake a few weeks ago, i was tempted to try one yet terrified,” said Berman. “With my friend's encouragement and gentle push, I quickly uploaded the app and enjoyed my first ride around the lake. Loved it.” She did not like the lack of a helmet with the rental and asked LimeBike to, “please include a helmet with a rental.”

Overall, LimeBike was my favorite due to the sturdier bike and fun features. However, next time I’m out looking for a bike to ride, I’ll snag the one closest to my location.