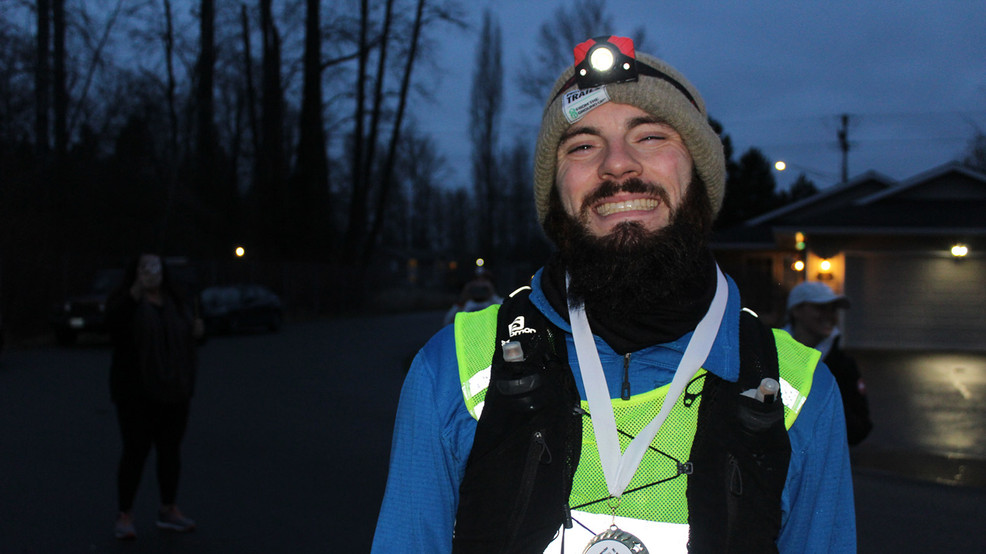 Austin Johnson remembers crying in the shower the morning of Saturday, Feb. 20, thinking about the long, challenging day ahead.

The 27-year-old from Lake Stevens was preparing to run for 24 hours to raise money for suicide prevention.

"I just knew how much it was going to suck, but I knew I had to do it," he said. "I think that's just kind of like the name of the game. Even when it's going to be really terrible, you just have to keep going. There isn't another choice."

He called the challenge "Run For Your Life." With the help of a team of friends and family, community members and strangers, Johnson completed his 24-hour run — raising more than $24,000 for the American Foundation for Suicide Prevention.

While the run itself was grueling on him both physically and mentally, Johnson described it as a humbling experience that has left him "completely fulfilled for a long time."

Doing a physical challenge to raise money has been something Johnson has wanted to do since high school. When he was a freshman, a friend of his died of Osteosarcoma. For his senior project, he got the idea to run a marathon to raise money for childhood cancer. But it never came to fruition.

"I was a baseball player at that time, and I had a college scholarship. Some of my baseball coaches [...] thought that if I got into running, I'd lose a bunch of weight. So they kind of talked me out of it," Johnson said. "It always kind of haunted me because that was just something that I really wanted to do, and then I didn't do it."

The idea stuck with him, and then the coronavirus pandemic hit. As Johnson battled with his own mental health and depression, he realized just how many other people were struggling, as well.

"There were so many people that I could tell were dealing with it, but they weren't talking about it," he said. "Because of the virus, there wasn't really any attention being paid to it. It was just about like the illness of the virus. It wasn't about people's mental health."

Johnson said he was inspired after seeing people, regardless of how they may have been struggling internally, were so willing to donate to relief funds and support small businesses. He planned his 24-hour run on a whim only a few weeks before it was set to happen. He announced the run, and it only took about a week for it to start gaining momentum.

While the volume of financial contributions his cause was receiving was unexpected, the real shock came in the number of people — strangers, acquaintances and loved ones alike — who reached out to share their experiences with mental health.

"It just kind of like shook me that it [...] was so big right in our local community," Johnson said. "And I didn't even really realize that."

Johnson started running at 7 a.m. Saturday, Feb. 20 and stopped at 7 a.m. Sunday. The first 12 hours were spent at Centennial Trail in Lake Stevens, then they moved home base to his house where he ran a 1.5-mile loop around the roads and park for the last 12 hours.

While he experienced some rough patches, particularly at night, it helped that he wasn't alone. He had several friends run with him throughout the 24 hours who helped keep his mind off the clock through conversation. His dad rode more than 50 miles on his bike along the track beside him. There was a station with food, water and supplies set up where family aided him. Johnson's wife stayed with him for the entire 24 hours.

He said he "couldn't have asked for a better crew" — and it wasn't just people he knew.

"There were probably 100 people from the community, just random strangers that stopped by during the day that walked with us. They ran with us. They just stopped and said 'hi' or share their story," Johnson said.

Johnson's original goal was to raise $2,000. Never in his wildest dreams did he anticipate raising more than 12 times that. He hopes that what people take away from this is that they can accomplish more than they might think.

"I'm not a special athlete. I'm not a great runner. I'm not super fast. I'm not any of these things," he said. "I'm what I would consider just an average guy going about his life. And you can do things that people think are pretty incredible that might not even seem that incredible to you."

Johnson said something he has learned through this experience is how impactful being open and vulnerable can be. Opening up has been a struggle for him, but it's something he's actively been practicing this past year by talking to a counselor, his wife, family and friends. It's shown him that being vulnerable can often inspire others to be, as well.

"Take that first step, whatever that first step is for you, whether it's getting help, whether it's talking to somebody. Whatever step one is, just take it because after step one, step two, three, four and five come a lot easier. Step one is the hardest one," Johnson said. "It's the same thing with running the 24-hour race. I was crying in the shower before the race, but once I started going, it was all smiles and laughs the rest of the way. It's like, you just have to take step one, and then it gets a little bit easier each step of the way."