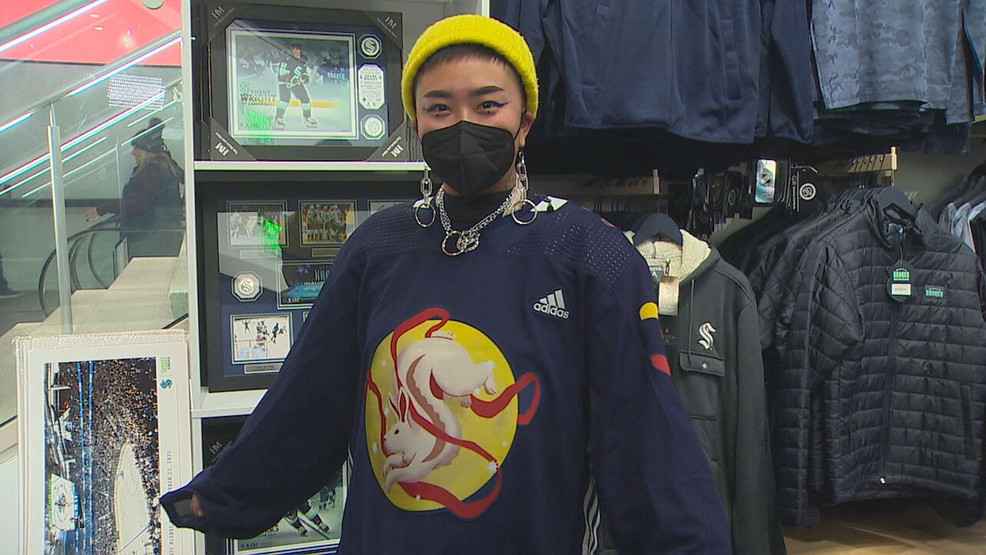 The Kraken has taken the initiative to raise awareness for many special occasions and communities throughout Seattle, like wearing special warmups for Black History Month in 2022.

On Saturday, they did so again to honor the Lunar New Year.

This is the Year of the Rabbit, so Monyee Chau from Seattle's Chinatown-International District created a special warmup jersey that reflects this special time.

The rabbit, as you look at it, is actually shaped in the exact shape as the Kraken's "S" logo on their game-time jerseys. That, along with the colors made it a popular design with players and fans alike — and after they heard Monyee's story they were even more impressed.

Identifying as Taiwanese and Chinese American, Monyee made sure the design incorporated the spirit of the game but also using the red and yellow colors so often featured in Chinese culture.

"It's such an honor to be part of the first Lunar New Year event for the Kraken," Chau said Saturday. "It's such a deep cultural practice that we've had for so long, our calendar goes with the moon and so it's a Lunar calendar.

"So it feels very special to share it with everyone and everyone gets to learn these stories about the rabbit and why we celebrate each year."

The Kraken will auction these popular jerseys to benefit the One Roof Foundation. It's part of a series that we've seen from the team's "Hockey is for Everyone" initiative.

In our brief time chatting in the Kraken team store at Climate Pledge Arena, Monyee was stopped by several fans who loved the design and of course were wondering how they could obtain one.

"It feels so special, there are a lot of people reaching out on social media saying that they're feeling seen and represented in the work. I think that's all I could ask for and it helps me feel like it's a successful design," Chao said.