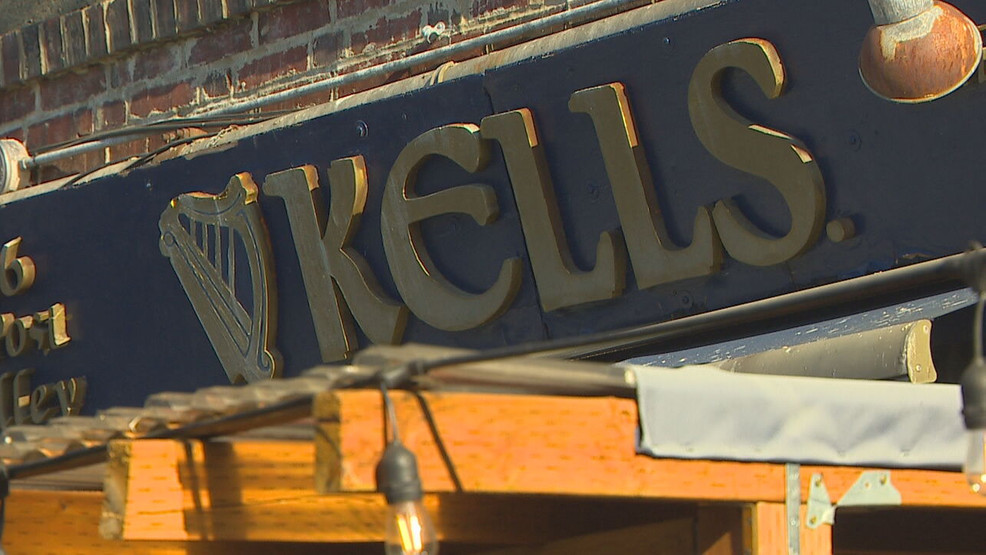 Kells Irish Restaurant and Pub is said to be the most haunted place in Seattle.
SEE MORE

It's a rainy Friday night and the old brick in front of Pike Place Market gets a thorough washing. The light from neon signs and assorted shops and street lights reflects off the wet ground and casts a damp and eerie pall about the place.

Storefront fall decorations take on a ghastly glow, and in this part of Seattle, you can feel the history. The past calls out like a siren song: remember, remember.

In front of the famous market where there are walls of gum and where fish fly, a woman in a red cloak and a black hat talks to fifteen or so men and women who follow.

"We're going to head right down over here to give you guys a chance to take pictures in front of the spooky windows," she said, and off they go.

They head towards Post Alley, a charming and eccentric little street that has the rarest of qualities in a big city -- character.

The woman holding court in the red cloak is named Phoenix Smith. She is a guide for "Nightly Spirits Ghost Tours." She tells frightening tales and leads paying customers through the spooky nooks and crannies of Seattle, and every tour ends in the same place -- Kells Irish Restaurant and Pub.

Cozy and warm and overflowing with Guinness and goodness, it is a Seattle institution, the place to feel the soul of the Irish coursing through your veins, whether you're Irish or not -- and, as it turns out, Kells is the most haunted place in all of Seattle.

Just ask Smith: "Statistically, Kells is the most haunted bar in all of America," she said, "but, from personal experience, it is the bar that made me a believer."

Why is Kells haunted? And how? And what does it all mean?

To understand, we must go back in time.

The backside of Kells, along 1st Avenue, is actually the front side of what is known as the Butterworth Building.

A man named E.R. Butterworth hired an English architect to design it and when it was finished in 1903, Butterworth moved Seattle's first mortuary into the building. For decades, almost everybody who died in Seattle passed through the walls and halls of Butterworth & Sons.

There was a tastefully decorated office where the business end of death was handled. There was an ornate chapel where the spiritual side was tended to. Small funerals, casket viewings and the like.

Elaborate funeral processions would depart from the front of the building. One picture shows an elaborate horse-drawn carriage with a driver in a top hat. Behind the carriage is a casket and its pallbearers, followed by two dozen or so soldiers, holding swords in front of them.

Butterworth & Sons was a one-stop shop for the journey from this life into what lies beyond.

He said the very site of his business, in the early days of Butterworth & Sons, was where they kept the horses and hearses that were used for funerals. But, after a time, he said there was a remodel.

"This is where they switched," he said, "the fitting room was here, and the embalming room was one floor up."

For decades, strange things have happened at Kells. Unsettling things.

Maybe you're rolling your eyes and thinking, "I don't believe in ghosts."

McAleese isn't sure he does either. And yet, there is video in the early 90s of him detailing strange goings-on. A younger version of himself said, "Out of the blue the door just opened, and I remember the guys, my brother Jared at the time, and another fellow that worked with us, refused ever to go back there." He tells the stories still.

"I spent a lot of time upstairs alone and a lot of unexplainable things have happened, you know? People ask me all the time do I see things? No, but I've had these experiences."

One ghost has been seen so many times that he's been given a name: Charlie.

Inside Kells, just around the corner from the bar, hanging on a wood-paneled wall is a mirror. "This is the spot," Patrick said, pointing, "Mirrors may change, but this is the spot it happens."

What happens, is that people see the reflection of a happy-looking middle-aged man in the mirror. He's wearing a derby hat and he's usually seen in the top right corner of the mirror, smiling.

But when people turn around, there is nobody there.

Dozens of people, maybe hundreds, have said they've seen him over the years.

Smith believes in the ghost of Charlie.

"I had a gentleman taking pictures of his wife in the mirror straight on," she said, "And she's facing him. And when we looked back at the picture there was a face, profile, right behind her head. And that's the first time I said, 'Something's not right here.'"

McAleese is careful not to speculate about the existence of ghosts or spirits in his bar, but he will show you a photo that was taken in the area of Charlie's mirror during some remodeling a few years back.

To the right of a door is a shadowy image that looks like, well, a ghost. It's right out of a horror movie. A skeletal mask of a face. Maybe.

Like so much of life, it depends on how you look at it.

One night forty years ago, Patrick and his dad were cleaning up after the bar and restaurant had closed. They were on the restaurant side, which joins to the bar side by a short hallway. It was late. And they heard a loud crash.

"Glass smashes. We hear it. And of course, we race here," he remembers, standing in the spot where it happened. "We were well closed, the only two left in the bar, and there was an old mirror here, and it was of course on the ground." He points to a shallow shelf, maybe four inches deep that runs along the wall. "And a candle was lit right here. And we immediately think, 'What's going on here?' We got our flashlights out."

He said the door to the bar was bolted from the inside, and there was no other way for anyone to have gotten in or out. He and his dad searched the bar for 20 minutes and found nothing.

Patrick smiles and said, "Maybe this person hid under the dishwasher, I don't know. To this day, chalk that up to another crazy story at Kells, you know?"

Then, there is the most famous Kells ghost of them all. The little girl in the red dress. I ask Patrick how many reported sightings there have been of her.

"The little girl in the red dress? Countless. It's like, she must work here!"

It is said that she is sweet and playful. She is said to be shy. And she always wears that red dress.

Patrick told me one story of particular interest. It involved a sighting of the little girl by a Samoan guy named Josiah, who was working security at Kells one busy night.

I tracked Josiah down. He lives in St. George, Utah now, and he tells a chilling tale of his encounter.

Josiah is a big man, the kind of man you can't imagine being afraid of anything, let alone a little girl.

"It was just another busy weekend over at Kells," he said. "I was at my post upstairs, and it was getting time for us to rotate. I hear footsteps on the stairwell that's right by my right side. And I'm like, 'What the heck?' and it's like little feet running up the stairs."

"I turn the corner and I can only see the feet going up the stairs, little kids' feet, it was definitely a little girl, I could just see the bottom of her dress. It was red, and she had white stockings on and, like, black shoes. So I get on the earpiece and I'm like, 'Hey, somebody have kids here? There's a kid up in this back stairwell, somebody got their kid here?'"

"Brent, he goes, 'There should be no kids here, period," Josiah recounted.

"So I go up the stairway about two flights and at the top, it's a doorway, just one doorway, nowhere else this girl could have run. It's pitch black in there. and I kinda like just froze. And then like, I like walk into a little cold space where it was, holy cow, it's kind of freezing! And the hairs on my neck started standing up and I'm like, 'Oh my God!' like, 'this is the ghost' and I turned and I ran down those stairs so fast. That's just stuff I don't play with."

Josiah said he was so scared that he was pushing people aside and yelling on his way to the front door of the bar that opens into Post Alley.

"Now all these bouncers are coming, they're like, 'Who's the little girl?' I was like, 'OK, so here's what just happened.'"

He told his tale, and one of the McAleese family members said to him, "Oh my God, you just saw the ghost!"

During our interview, Josiah said the sighting still haunts him: "I'm getting chicken skin just thinking about it," he said.

There is nothing more Irish than a night at Kells in Post Alley, just over from Pike Place Market, where the past calls out like a siren song. It's a place of joy and celebration.

It's also the most haunted place in all of Seattle, whatever that means.

All the stories, the imagery, the strange occurrences in this old building with a spooky history. Are they just lore and legend? Stories simply conjured from nothing?

Or, will the restless dead, lost remnants of a forgotten mortuary, wander the rooms and stairways E.R. Butterworth's building for eternity?