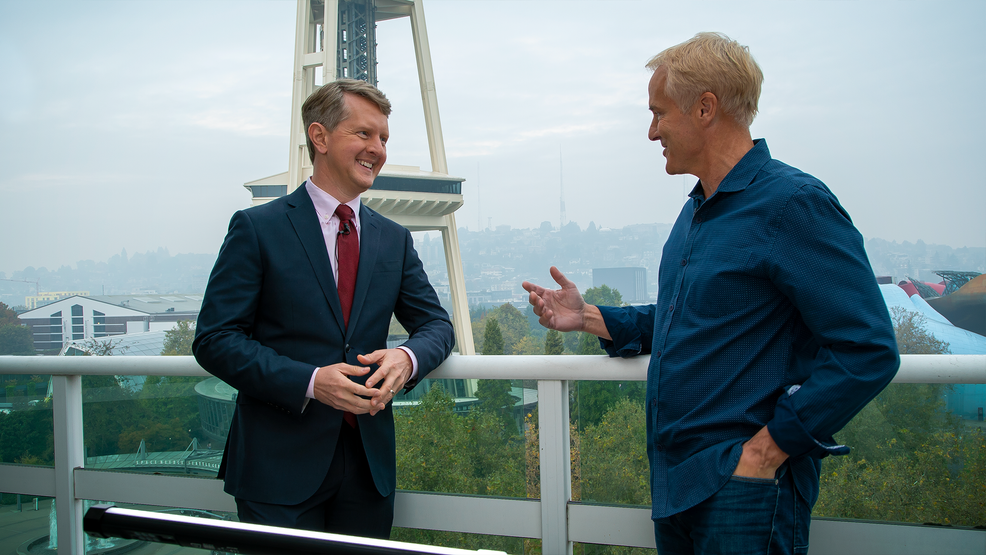 Ken Jennings is living his Jeopardy! dream. He was named host of TV's quintessential quiz show along with Mayim Bialik, to replace the late game show veteran Alex Trebek.

Fans of the show know Jennings has come a long way from contestant to host. His journey started nearly 20 years ago when he became a bonafide Jeopardy! celebrity. Back in 2005, Jennings won a record 74 games in a row, earning more than $3.3 million.

Jennings also won the "Greatest of all Time" Tournament in 2020, solidifying him as the true Jeopardy! G.O.A.T.

Throughout his rise to trivia stardom, Jennings has called Seattle home and still resides here with his family — that is, when he's not in L.A. hosting Jeopardy!

Jennings stopped by Seattle Refined to catch up on life since our last visit.

Seattle Refined host Gaard Swanson: Did you ever think this would be your gig right now?

Ken Jennings: No, I have to pinch myself every time I walk out there. I feel like the kid that wins the Chocolate Factory because I was a Jeopardy! fan as a kid. It was always my favorite show. And the fact that, 30 years later, I'm hosting... I don't believe it.

Gaard Swanson: How did this whole thing start for you?

Ken Jennings: I was 10 years old in 1984 when the Alex Trebek Jeopardy! came back on the air and my family was living overseas. We had moved from Seattle to South Korea, which was great, except there was only one TV channel — we had Armed Forces TV. So me and all my friends had to watch the same stuff at the same time every day. And by some accident of Pentagon policy, Jeopardy! was on every day right as we got home from school. So we were all obsessive Jeopardy! fans in the fourth grade and it's been a huge part of my life ever since.

Gaard Swanson: You've been hosting now for a while. Anything surprising now that you're in the big chair?

Ken Jennings: Well, Alex made it look so easy for years because he was so graceful and did everything perfectly. I think we all assumed it's kind of an easy job... It turns out, logistically, it's a very hard job to do. You have to run the game for the players, you have to run the game for the home audience. It moves very fast. Final Jeopardy! has a lot of math. There's a card full of numbers. I was just in a panic at first and I'm starting to get the hang of it now, but it's taken well over a year.

Gaard Swanson: Before Alex passed away, did he give you any tips?

Ken Jennings: I actually spoke to him the same weekend he ended up passing away. We didn't know and I was going to come in and rehearse to do some fill-in games for him. I talked to him on the phone a bit and the thing to remember is just how much he always said that Jeopardy! should not be about the host. He was always taking the spotlight off himself. You know, this game is about the contestants, it's about the clues... I just can't get my mind around somebody in TV saying, "Hey, I don't want to be in the spotlight. This should not be about me."

Gaard Swanson: Yeah, Alex Trebek was a cool dude. There's no getting around it. I remember interviewing him a few times and I asked one of the producers, I said, 'Is there anything I can ask him that no one's ever asked him?' And they said to ask him about doing DIY projects because he loves working with his hands. And he opened up about his love of working with his daughter on her house. And he was just that kind of guy.

Ken Jennings: He was a normal guy. He had stage four cancer and he was up on his roof clearing out the gutters. After a Jeopardy! taping, you'd always see him in a denim outfit and sitting in a pickup truck headed home. He was not always the suave guy in the Perry Ellis suit that we saw on TV. The first day I came in to host, his wife Jean, his widow, had left behind a little jewelry box that had a pair of his cufflinks in it. And a lovely, sweet note kind of wishing me the best of luck. In her moment of grief, she was thinking about trying to do her husband's old job and it just meant the world to me. What a sweet woman.

Gaard Swanson: Wow. And just like you mentioned, he made it look so easy. He was such a down-to-earth guy. And I remember when I was talking to him, he said, you know, all of the people that work here and the contestants, it all feels like family. Did you kind of get that sense, too?

Ken Jennings: It's a very unusual situation in TV because people work at Jeopardy! for 20, 30 years. The supervising producers of the show each have like over 30 years of Jeopardy! experience on them. The guy who puts on my mic every show was also putting my mic on as a contestant in 2004. And it's a real family. It's an honor to try to be the person who's trying to keep some of the sense of continuity there — in the hot seat now because we all miss Alex so much.

Gaard Swanson: What about Johnny Gilbert? He is a really fascinating guy.

Ken Jennings: Johnny is lovely. Johnny is now in his mid-90s. And he records the announcer introductions at home, he's got a home studio now. He's a podcaster at age 90-whatever. He came into the studio where we have a Jeopardy! Hall of Fame now. And he gave — at 94 years old — the most beautiful, kind of 5-minute summary of what Jeopardy! means to him, and what it means to viewers. There were tears in my eyes. Squad goals is to be Johnny Gilbert when you're 95 because he's got it together. But it says a lot for that show on how people just respect each other, love each other. And I think that's probably part of the beauty of why this show keeps going on.

Gaard Swanson: Any tips that you can give people who want to try out for the show?

Ken Jennings: I'm very happy I have the answers in front of me now, but we have an online test. You could go to jeopardy.com right now and just try out the contestant test for fun and see how you do. I really recommend it because if you're a fan of the show it's fun to see how you would stack up. And you know, maybe we'll give you a call.

Gaard Swanson: Any tips with the clicker?

Ken Jennings: Clicker is hard. The clicker - getting into that rhythm on the signaling devices - may be the hardest part of the show to master... And if you buzz in early, you actually lock yourself out for a fraction of a second. So you're trying to find this millisecond where your competition hasn't beaten you yet, but you're not going to lock yourself out.

Gaard Swanson: I know you love working down there. You're in Los Angeles. You also live up here in Seattle... so Seattle or L.A?

Ken Jennings: We could move to L.A. and I would have a much shorter commute to Jeopardy! But I'm a Seattle kid, born and raised, and we're in for the long haul here. I'll happily fly down to Jeopardy! a couple times a month and get my Alaska Airline status. We live here.

See the full interview in the video above, plus a fun moment with Ken and Gaard here: