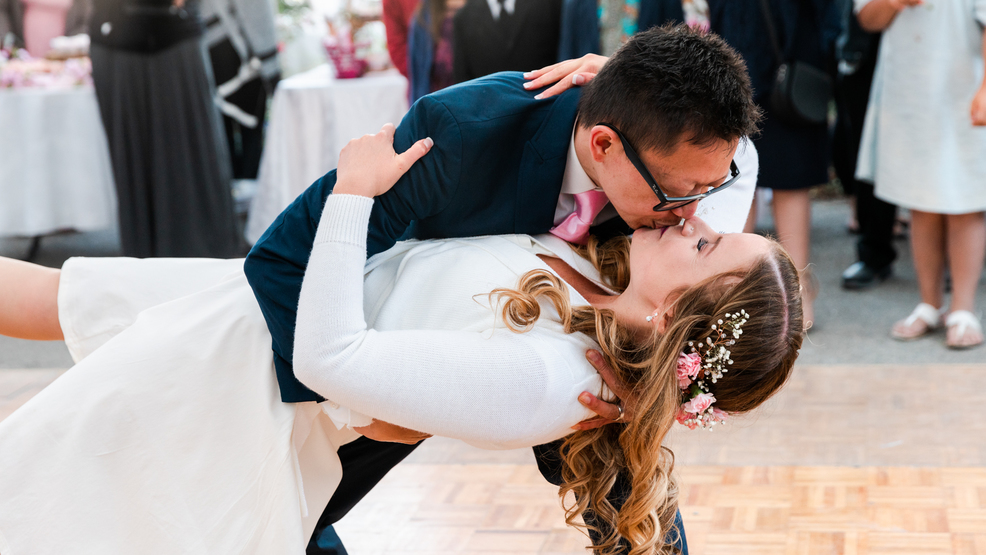 When KOMO photographer Doug Pigsley saw a couple practicing swing dancing in Queen Anne's Counterbalance Park - he had to get the story! What we learned was a sweet and uplifting tale of love. (Courtesy Dariel Cummins)
SEE MORE

But somewhere in the midst of the cars, cyclists, walkers, texters and talkers - there's a completely unexpected sight.

A couple with eyes only for each other, are learning a special swing dance surrounded by strangers, as their instructor gently corrects, and encourages them.

"Stop – try to make sure that there are some pauses so that it doesn’t just get into this rhythm that’s easy to predict," said Kevin Buster, the couple's intrepid teacher. "Now stand tall, heads tall, aww that looks beautiful."

These dancers aren't just practicing some moves, they're practicing to be partners for life. Both nurses, they met at work.

"I was doing really bad on 18 gauges, which is a really big needle," said Kandis Inaray. "I asked him one day if I could put an IV in him, and he let me. I was really attracted to his veins which is really bad - but I mean it goes with my profession I guess!"

Soon they were dating, and then - they fell in love.

"I am a big avid hiker and stuff and so I was listening to this one song and I just really loved this song," said Kandis. "And then you know we were kinda talking about getting married and stuff, and then you know - he ended up proposing on a hike!"

Kandis had the idea of surprise their wedding guests with a special dance.

"I had had really thought in my head that I wanted to learn a dance," she said. "So swing would go with this music."

They found the perfect teacher in Buster.

"I think there’s a couple things in the dance that’s gonna get everyone going!

At first they couldn't find a place with enough room to practice. Which led them to Counterbalance Park, and urban oasis. There was plenty of space, and plenty of action around them too.

"At first I was kind of nervous being in front of everyone," said Ray. "But I think once the music start rolling I just focused on her, I just forget about everyone."

Then, the big day arrived. They said their vows, and it was time for that first dance. They started off slow, their guests had no idea what was about to happen.

Suddenly, a tempo change - a totally different dance - one that they had spent months prepping for.

As they twirled, jumped and joyfully danced their way across the floor, it was clear that Kandis and Ray, now husband and wide, were in perfect step. And if they could learn to swing together in six months, they were ready for the dance of marriage too.

"It’s been fun," said Ray. "I never thought I would learn swing dancing. I’m glad she pushed me to do it."