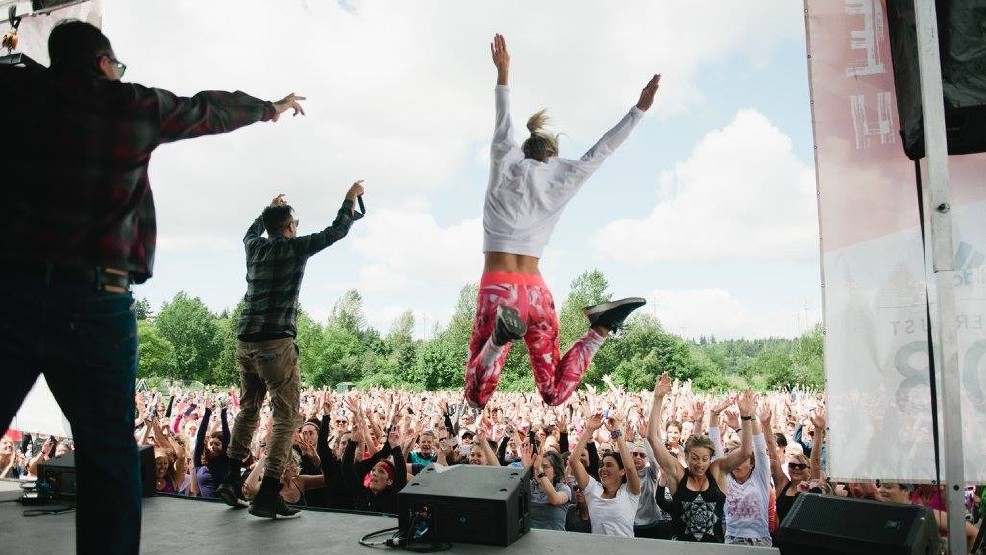 I Participated in a Mindful Triathlon

On Sunday, Wanderlust 108 rolled into town for the world's first and only "mindful triathlon" to Marymoor Park in Redmond. Over 3,000 people signed on to run a 5K, participate in a 90 minute yoga class before being led through guided group meditation. There were also mini workshops in barre3, acro-yoga, slack-lining, hooping along with tribal color marking.

I arrived bright and early at Marymoor Park, grabbed my yoga mat and headed to the venue setting. I haven't run in over two years so I was a little nervous about the 5K event. Luckily I found a friend from my gym who agreed to walk the course with me. I did neglect to notice that she was much taller than me with long legs. Coming in a 5'1" means I have short legs which worked hard on the 5K walk. The out and back course was gorgeous as it wove through the trees. The feeling of encouragement and support started with MC Yogi who got the group pumped up at the run's start.

Once we were down with the 5K course, my new friend and I headed over to the Tribal Marking tent to get our faces painted. My face painter was fabulous and said that we needed to connect before she proceeded. I kept forgetting that I had paint on my face when I left Wanderlust which made for a few hilarious moments. While at Wanderlust though, it made me feel as part of the tribe. Some of the other tents offered protein snack bars, kombucha, hair braiding sessions and free tote bags.

I signed up for a barre3 session so I headed over to partake in some quakes and shakes. I chatted with Kimberly Johanson, owner of barre3 Ballard who told me that she expects the studio to open in the next month. Since that is right in my neighborhood, I made a mental note to stop in as soon as they open.

As soon as my barre3 session ended, an announcement was made for participants to head to their yoga mats for the Yoga Dance Party with MC Yogi, followed by Yoga flow with Chelsey Korus. Everyone was encouraged to high-five their neighbors, tell them they were awesome and keep the good vibes flowing. The dance party was a bit of a surprise to me since I obviously didn't read my Wanderlust schedule closely enough. While I am in no way a dancer, it was easy to get carried away with the fantastic feelings flowing through the crowd.

The Yoga flow session was full of energetic moves and friendship. I skipped some of the poses because at this point in the day, I was getting tired. I was thrilled when we moved into some stretching poses that focused on the muscles we had used in the 5K. Doing yoga outside instead of in a studio was a wonderful treat. The rain stayed away long enough on Sunday which was a delightful bonus.

The mindful triathlon's day ended with a meditation led by Dave Smith, a Buddhist meditation teacher and addiction treatment specialist. As a long-time Buddhist practitioner and recovering addict, Smith has worked closely with recovering addicts for over eight years. His meditation closed out a day of mindfulness and self exploration.

The fun lasted on past Smith's meditation with mini workshops in acro-yoga, slack-lining, barred3 and hooping available into the afternoon. I decided to visit the vendor booths and check out the Wanderlust merchandise. I snagged a free tote bag, tried a new protein shake and checked out the Adidas apparel. I think some of my wanderlust was found at the festival. Until next year, I'll be keeping the Wanderlust feeling alive in my heart.