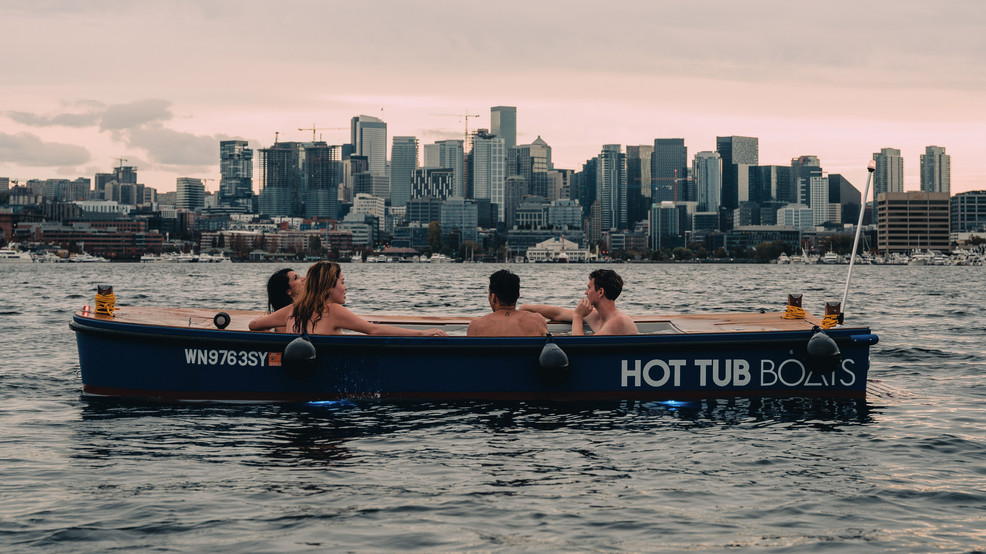 April showers bring May flowers but what does June mean for Seattleites? The rain is (finally?) in retreat, the cherry blossoms have bloomed, and the lake is calling you by name. There are plenty of ways to enjoy the water, whether you relish the social activity around Green Lake or the wide expanse of Lake Washington. Some prefer to kayak or paddle boat. Others cruise the water in rented electric boats with friends.

But those are all amateurs because elevated hangs take place on Lake Union and look like THIS: a sleek teak, 16-foot boat that glides through the water, operated by a dummy-friendly joystick as you and your friends soak in a hot tub that clocks in at a toasty 104 degrees throughout your two-hour soirée. That is exactly what the aptly-named company Hot Tub Boats offers, and for now, it is an exclusive perk of living in the Emerald City.

"There are no other major metropolitan cities in the country, or anywhere that I can think of, that have something like Lake Union as a resource," said Hot Tub Boats founder Adam Karpenske. "People can really get out and enjoy the lake. And it’s protected. And it’s right in the middle of our city. There’s not anywhere else that really has that."

Born in the winter of 2011, Hot Tub Boats was, at first, just an idea Illinois-native Karpenske had while on the lake during a particularly cold and rainy day. As a wood boat builder by trade – ("A marine carpenter slash shipwright, we don’t know what to call ourselves.") – Karpenske knew it was within the realm of possibility and his abilities to bring to life something so outrageously fun, so ridiculously promotable and so undeniably perfect for the cold winters of the PNW that it was worth a shot. He quickly got to work, but creating a boat that could perform all its boat-ly functions, like staying afloat and moving around the water, while also housing a full-scale tub of water and its warming mechanism was hardly a throwaway task.

"When we designed it, it was loosely based off an old army power barge from the WWII era that was used to transport logs between Alaska and Seattle to build things for the war," Karpenske said. "We made it a little prettier, but we knew that the boat could carry lots of things. We built it in stages. Build the hull. Put it in the water. Make sure the center of buoyancy is where we thought it was. Fill up a tub and pull it around to make sure water didn’t go everywhere. There were those trial points, and, in the end, we kind of hit a home run."

To keep the tub at "what the Feds say is the max, 104 degrees," Karpenske employed "magic... no, not really." The Hot Tub Boats founder discovered that diesel boilers and a system for circulation would keep the temperature high, even "in the rain, in the winter, in the wind with six people in it." And the boats, though pulled from a historical design for practical use, are aesthetically modern and totally appealing to our post-Influencer eye: retro, minimalistic and smugly elegant.

Located at 2520 Westlake Ave N. in an old boathouse decked out with colorful wall murals by local artists, softened by its various house plants maintained by the staff and featuring a hand-crafted floating hut at its heart, the Hot Tub Boat facility on Lake Union contains all the necessities for before and after hot tub soaking: changing room, restroom, storage lockers, and hot outdoor showers.

Another feature that differentiates Hot Tub Boats from the other electric boats dashing around Lake Union is its steering mechanism, which operates with a joystick versus a traditional wheel. This was by very specific design and has a threefold purpose.

"We didn’t want a big console in front of somebody," said Karpenske. "You want to feel like you’re just sitting in a hot tub. The other side of that is it’s cool! This boat drives with a joystick! The third part of that is that people don’t have to be a boater to be able to go out and feel comfortable doing this. It’s a much more equitable way to get people on the water. It’s a weird mix between kind of luxury, kind of affordable for people. Anybody can drive it."

Renting a boat doesn't come cheap, however. To "soak up the sea-nery," it will set you back just shy of $450 for the two-hour rental, which includes access to the facility's amenities before and after your reservation and the time on the water to explore such attractions as Gas Works Park, the downtown Seattle skyline and the many eclectic houseboats that dock along the lake's perimeter. The tub holds a maximum of six guests, and you can time a trip to hit the sunset or as a way to de-stress from a morning hike. This is the beauty of Seattle in the summer. Everyone is outside and game for a new adventure.

For now, this is Hot Tub Boats' only location, though Karpenske said he would love to bring the joy of soaking to other cities. It's easy to forget just how idyllic it is that Seattle rests on a large, protected waterfront, one that offers endless, constantly evolving activities for its sun-seeking residents. Though it's his bread and butter, Karpenske cheekily summed up Hot Tub Boats quite perfectly: "It’s a silly thing that the world didn’t need, but they sure seem to enjoy it."