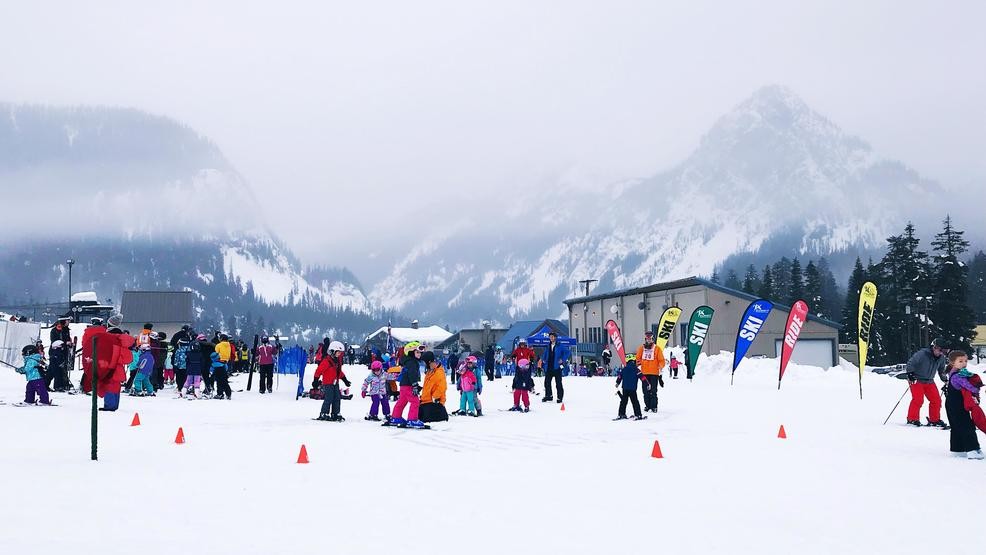 The slopes were packed with skiers of all abilities. (Image: Rebecca Mongrain/Seattle Refined) <p></p>
SEE MORE

In my teens and early 20’s, I was an avid skier. I flew down mountains, skied the backcountry and took on double black diamond runs with nary a glance. My Dad, a former ski instructor, taught my brother and I how to ski when we moved from Texas to Washington. We quickly took to the sport.

My parents were both skiers in their formative years in Utah and met when my Dad was my Mom’s ski instructor. My brother soon followed in my father’s tracks and became a ski instructor himself while I just enjoyed the sport. My brother and I skied all the time and even took a few trips to go skiing. Then I graduated from college and no longer had extra cash for such an expensive sport. I put skiing aside as I pursued a career, got married and had kids. I took over 15 years off from skiing.

Now my kids are finally old enough to take on skiing themselves. I enrolled them in ski lessons this year with the idea that I would be able to get back to the slopes. Initially I was going to ski during all of their lessons but then the first one came and I got nervous. I decided to hold back to see how they did in their lessons. My 6 year old LOVED skiing and told me she wanted to ski with me. My 4 year old HATED skiing and wanted to sit in the lodge with her dad. At least one of them enjoys the sport!

For their second lesson, I decided to go skiing myself. I rented skis and all my feelings about ski boots came flooding back. I have hearty calves and I find good fitting ski boots hard to find. I called my brother who reported the same issue so I know it is a family problem. The guys at Seattle Ski hooked me up with some great rental gear though. They gave me tips and when I asked if I really needed a helmet, gave me a look that said, BUY A HELMET! Back when I was skiing, few people wore helmets. There were little kids whose parents were viewed as overprotective, who wore helmets and then the insane crazy ski jumpers. The regular people didn’t have them. Times have changed however and now even the most basic skier wears a helmet which has helped lower concussions. I soon left the shop with my rental gear, new ski socks and a great helmet. I make my kids wear helmets so it is important I also wear one.

We headed up to Snoqualmie West the next day so my kids could go to their lessons and I could attempt to ski. The Summit at Snoqualmie offers Beginner Lift Tickets so I snagged one. It saved me about $20 from a full access pass and I knew I wouldn’t go on any chair rated higher than blue. I sent my kids to ski lessons, waved to my non-skiing husband and headed to the Magic Carpet, another new invention since my time.

When I used to ski, we had a rope tow which ripped up your gloves and put fear in your heart. I was always scared my hair would get stuck in the rope. Skiing was much more dangerous in my day. Skiing is still pretty dangerous.

I glided onto the Magic Carpet and went up the bunny slope. I took a few snowplow turns down the run and then hit the carpet one more time before finding my brother. I asked him to go up the chair lift with me for my first run. He made fun of me and then reminded me how to ride a chair lift. We headed up to the Little Thunder chair together and I successfully made it on and off without disaster. Now that I had conquered my biggest fear, I was ready to really ski. My brother ditched me at the top to go do his own thing and I took a really long time to get to the bottom. I was amazed. My muscles remembered how to ski. I was no longer graceful but I was still ok at skiing. I moved my legs out of a snowplow position and into a parallel position for most of the run. My body instinctively leaned downhill and I started doing wide turns down the slope. I did have to stop quite a few times to rest but the skiing felt easy. I remembered why I liked to ski.

At the bottom, my legs felt like jello and they were shaking. I headed back to the chair lift again. My second run was even better! I got some speed and it took half the amount of time as my first run. Skiing was becoming to feel easier. My muscle memory was in full force when I started to exit the chair lift and the rider with me started to flail. I quickly grabbed her arm and skied her off the chair so neither of us would fall. I was honestly shocked because I did it without thinking and with full confidence. She thanked me for helping her off the chair. I was thrilled we didn’t fall and stop the chair lift which was my greatest fear for the day.

I did a few more runs before checking in on my kids. I ended up needing to cut my time short as my youngest was not willing to stay in her ski lessons and was causing some issues for the rest of the group. My husband and I took her to get lunch while we waited for my oldest to finish her lessons. Once she was done, she begged me to take her on the magic carpet and do a few runs. That was when I noticed just how tired my legs were. My calves were cramping and my knees were sore. I pushed through and did a few runs with my oldest before announcing that I needed to go home. I was grateful that I had made my husband come up to the ski slopes with us. I knew I was too tired to drive home and groaned most of the ride back. Once home, I took a long hot bath and dragged my body around the house. I went to bed at 8:15 p.m. that night, before my kids even made it to their beds. My legs hurt for days. I took a barre3 class the following Tuesday and was still wincing in pain.

Then the next Saturday approached and I knew I needed to get back up on the mountain. I went back to Seattle Ski to rent skis. This time, my husband and youngest stayed home. My oldest and I headed out at 7 a.m. for a day of skiing. It was snowing quite a bit as we approached the Summit which I hoped meant a great day of skiing. We arrived early enough to do a few runs on the Magic Carpet before my daughter’s ski lessons. I met up with my brother as his daughter is also doing ski lessons. I got my Beginner Lift Ticket and we headed to Little Thunder. It felt like I had been skiing forever. I glided onto the chair lift and swished, literally swished down the mountain. I got speed! My biggest concern was skiing around the ski lesson participants and what felt like a hoard of skiers. The good snow meant it was a lot busier but it also meant better skiing. The snowy conditions contributed to me feeling colder and finding the limitations of my gear. I did not invest in the very best gloves, googles or snow pants this year as I wasn’t sure if I would get back into skiing.

After skiing for a few hours, I picked up my daughter from her ski lessons before skiing a few Magic Carpet runs with her. She had learned how to stop and was so much fun to ski with. She announced she was hungry and tired so I suggested we head home. We both agreed that we had a great day of skiing. I noticed I wasn’t as tired. I don’t know if it was the better skiing conditions or if my muscles remembered how to ski without much pain. I wasn't sore the next day and while I still went to bed early, I was able to stay up past my kid’s bedtime.

I’m planning to go skiing again this weekend but I’ve ordered a few products to help me out. My gloves did not keep my hands warm and my googles fogged up too much. I have new ones on the way to me. I’m investigating ski sales and looking to get my own gear so I don’t need to rent skis. My daughter and I are thinking of taking a ski trip next year to Colorado. My husband and other daughter told us to have fun.

When people told me skiing was like riding a bike and that you never forget how to do them, I did not believe a single word. Now that I’ve been out on the slopes twice with plans for more, I believe. Depending on your ski level, your muscles do remember how to ski. It comes right back. Yes, there are sore muscles and for my 43 year old body, some very cranky calf muscles. There is nothing to describe how awesome it feels to fly down the mountain though. The adrenaline rush is amazing. I can't wait to get back out on the mountain.