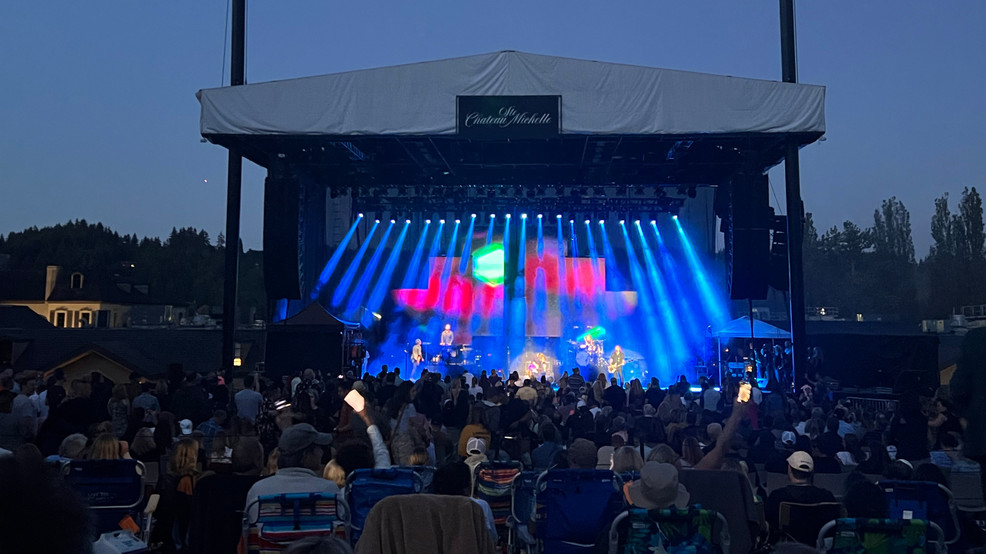 Looking up to the sky Saturday night, you could see a hot air balloon floating over Chateau Ste. Michelle Winery. Likely unable to hear what was going on, the hot air balloon passengers surely couldn't miss the sold-out crowd singing and dancing to the music of a certain record-breaking, multi-platinum rock band.

That band would be the Goo Goo Dolls, who stopped by Woodinville, Washington on their first full-length tour since 2019. The concert was part of Chateau Ste. Michelle's annual Summer Concert Series.

It's safe to say the majority of people have heard of the Goo Goo Dolls, a band that's been together for more than three decades, releasing music and touring all over the world. The GRAMMY Award-nominated band was formed in Buffalo, New York in 1986, and is currently comprised of lead vocalist John Rzeznik and bassist Robby Takac. Known for songs like "Iris," which spent 18 weeks at #1 on Billboard's Hot 100 Airplay chart, this band shows no signs of stopping. Their 13th studio album, "Chaos in Bloom," will be released on Friday, Aug. 12, with the lead single, "Yeah, I Like You" available now.

Chateau Ste. Michelle is known for their wine, but they are also known for their epic outdoor concert series each summer. Concerts typically sell out, and for good reason — live music, wine and sunshine? What more could you ask for? This year's lineup featured the likes of Tenacious D, Norah Jones, Jason Mraz, and, of course, the Goo Goo Dolls. Concerts continue into September.

Blue October, an alt-rock band from Texas formed in 1995, opened the show — many in the crowd were spotted wearing Blue October concert t-shirts. The Goo Goo Dolls treated the crowd to an electric set of some of their most popular songs like "Come To Me," "Name" and "So Alive." Of course, the penultimate song was "Iris," which brought everyone to their feet, singing every word back to them, just after the sun had set.

They capped off the night with an insane cover of "Runnin' Down a Dream" by Tom Petty and the Heartbreakers.

Overall, from the performance to the venue, seeing a show at Chateau Ste. Michelle Winery is definitely a summer *must* in the Pacific Northwest.

Photos: Indie darlings She & Him perform at Chateau Ste. Michelle