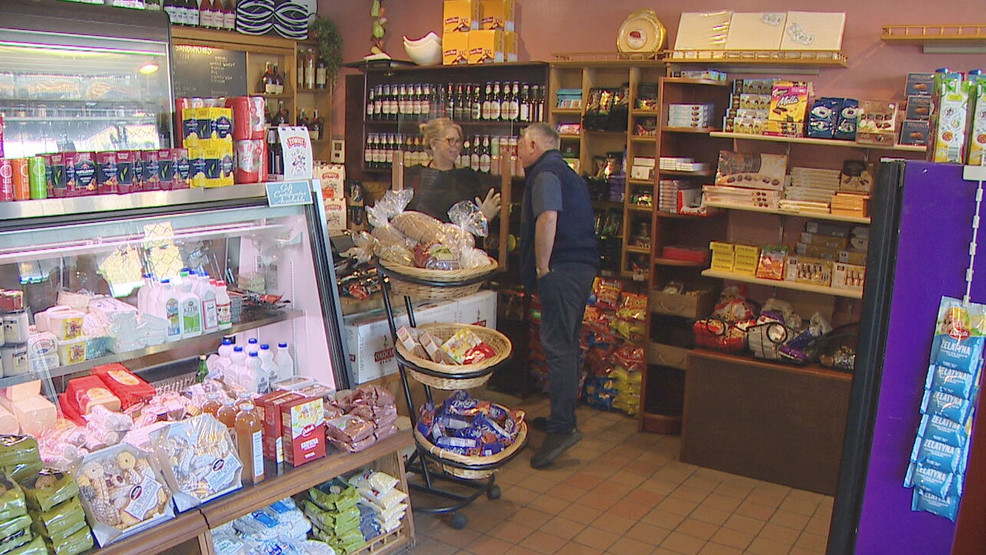 To walk into tiny George's Sausage & Delicatessen on Madison Street in Seattle's First Hill neighborhood, is to be transported.

All about you are cans and bottles and boxes of groceries and delicacies from far away.

There are imported mustards and horseradish's, all different kinds. There are sardines from Latvia packed in jars, and mackerel in blue and gold tins. There is honey from Russia, and specialty cherries from Poland.

There is eggplant caviar, canned pork, and even Eastern European cookies, dozens of kinds. Then there's Russian cookies dusted with powdered sugar. There is Polish lager, called Zywiec, and the bottles are lined up like little soldiers at attention.

From floor to ceiling it all waits -- chips and crackers and imported soda and exotic cheeses. Pickles and peppers and where would Pete Piper put 'em if he picked a peck anyway? There's no room.

And amidst the eye candy, there is real candy too, chocolate covered dates and the like.

And the meats. Oh, the meats! Guys show up just to look in wonder at the hams, the bacon and the pork loin.

The meat case is jammed always with kielbasa and assorted sausages, veal wieners, you name it.

And Janet is here too. This is her place. She dreamed it and made it come to life 45 years ago. She is cheery and busy, with a charming Polish accent.

"I think it keeps you going, gives you life," she said, "getting up in the morning and you know you have a job. That is a good feeling."

She could retire if she wanted, and I'm struck by her willingness, even eagerness to work.

"Many people dream of not working," I said. Janet answered the way I knew she would: "I don’t think that fits me, I have to work."

So yes, to walk into George's Sausage & Delicatessen is to feel like you've discovered a cozy little gem -- a treasure.

But just outside of George's, it is different.

The Quarter Lounge, next door to George's on Madison, is long since shut down and graffitied over. The business on the other side is closed for good, too. Even Vito's, the Italian joint down on the corner is closed because of a fire that happened over the summer.

Directly across the street is pretty much mayhem. There are diggers and front loaders and dump trucks. They pull up concrete and giant rocks and drop them into dump trucks, over and over, and the noise is something to behold.

Janet stands on the sidewalk in front of her store and said, "It's very hard. We've had this for two years. We lost the parking. We have no customers because they cannot park. The noise is bad."

It's true, there is no more parking in front of George's, and the two years of construction aren't the worst part. The worst part is that it will continue.

"Have they told this when this will end," I asked.

"Two more years of this?"

"Can you survive two more years?"

In the back room behind the counter, cabbage soup is made fresh every day. And the potato salad, also made every morning, has a cult following.

The sausages in the meat case up front? Those are smoked daily over Alderwood chips.

Janet opens the smoker to prove it. "There’s like 65, 75 pounds in it. They are going to go for six hours."

And then there are the sandwiches.

A woman named Jeanette works around the corner. "The corned beef is to die for, " she said, accepting her sandwich from Janet. "I'll probably see you tomorrow or the day after, "she said.

Mike has been coming here for more than 30 years. He wears a tie-dye t-shirt and a fedora. "A lot of us know a gem when we find one. I don’t know how else to put it," he said.

And Luca, who works at a hospital up the street, is a George's believer. "Excellent service, great sandwiches, old timey joint... you can't beat it."

Behind the counter, crafting sandwiches is Raquel, who said working for Janet is like being part of a family. She said the most popular sandwich is called, "George's Special."

"Three kinds of smoked meat," she said. "We have Canadian bacon, Polish ham, and all kinds of meat from the front and we put it in the George’s Special." She forgot to mentioned the lettuce, onions, pickle and tomato all piled high on fresh bread.

Raquel seemed proud to make a sandwich that is in such high demand.

There have been several attempted break-ins at George's. And they had to put a padlock on the dumpster on the corner, because it's been so frequently emptied out onto the sidewalk.

When you start to add it up, it's amazing that George's Sausage & Delicatessen not only survives, but thrives. There's no parking, there's urban blight, the construction is a nightmare. But excellence has kept George's alive. Excellence, and one woman's iron will.

Tammy is the third woman who you'll find at the deli, working and caring and loving the place.

She said she is filled with amazement by her boss, Janet. "Her strength and her will is incredible. Strongest woman I ever met. For real. She gives me strength," said Tammy.

When the lunch rush was over, I told Janet that she seemed like a tough lady.

"My mom taught me to be tough," she replied, and smiled and nodded as if to say, "You're damned right I'm tough."

I remembered something Tammy had told me about Janet, "She said that if she doesn’t work she won’t live. Her job is what keeps her alive."

I asked Janet about that: "What does this place mean to you?"

Aren't we all hungry for what George's Sausage & Delicatessen has to offer?