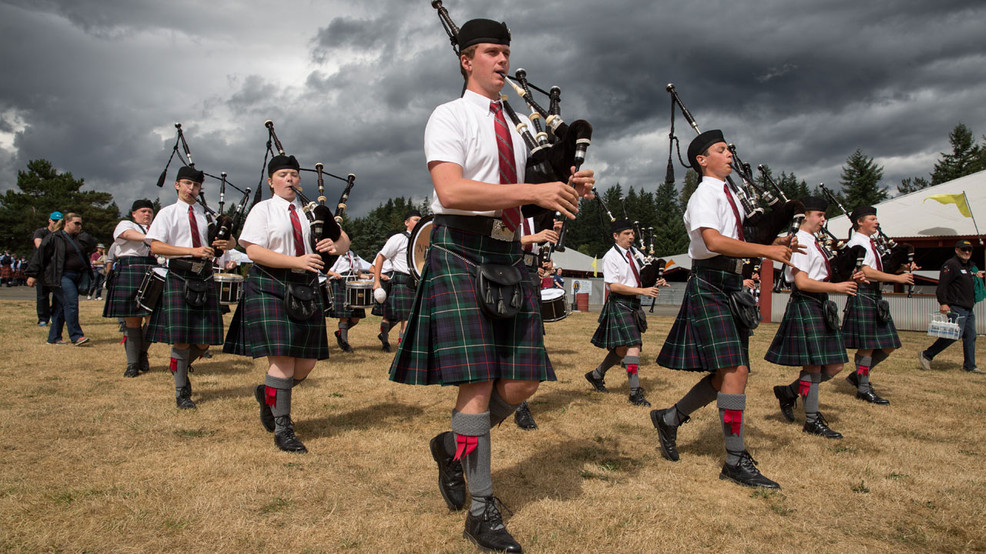 Experience a wee bit of Scotland at the Pacific Northwest Scottish Highland Games & Clan Gathering, the largest event of its kind in Washington state, set for July 22-24.

The 6th oldest Scottish festival in the U.S. went virtual the past two years due to the pandemic. But the beloved festival returns in person for the 75th annual games in 2022. The event is organized by the Seattle Scottish Highland Games Association (SSHGA).

"So many of our folks come in from Canada, and the border was closed," said SSHGA spokesperson Sharon Ritelis. "So, with that resolved, the pipe bands are coming back, and the individual pipers, drummers, dancers and athletes will all be here."

Immerse yourself in Scottish culture at the event held largely outdoors at the Enumclaw Expo Center. Highland dancers will hit the stage to compete for prizes, and skilled athletes will battle in the caber toss, hammer throw and stone put.

Sample traditional Scottish food and drink and shop for items imported from the British Isles. Then settle in and experience the sights and sounds of the Celtic Arts Showcase, which features local Scottish, Gaelic, Irish, and Welsh dancers, musicians and singers.

Blue Cloud Celtic: The group from the Lakewood/Tacoma area performs both traditional Scottish and Irish folk music, as well as contemporary music.

That Irish Guy: Emmet McElhinney was born in Omagh, Ireland and now resides in Gig Harbor. His performances are a combo of Irish, country, rock, folk and spoken word.

On both Saturday and Sunday, midday opening ceremonies feature the parade of clans.

"I think we've got over 50 clans that are coming to be represented," said Ritelis.

The word 'clan' ('clann' in Gaelic) means children. A clan is described as being a group of people united by a common surname, linked through actual family ties or by perceived kinship. Clan names are usually associated with the area of Scotland where the group lived. There are more than 500 clan and family organizations registered around the world.

Ritelis said the clans attending the Games will have booths where you’ll find information about their history.

"The Seattle Genealogical Society has a booth and brings a lot of their research books and helps folks learn how to trace their ancestry," said Ritelis.

There are plenty of options for the wee ones, including a children’s passport.

"Kids can stop at the information booth and they get a passport listing all the different clans and they go around all the clan booths and get a stamp from each one of them. When they get so many stamps on their passport, they get to come back and get a prize," said Ritelis.

In addition, there will be many kids competing.

"A lot of kids see their peers doing Highland dancing, piping, and drumming you know, other kids their age," said Ritelis. "Doing these things, I think is pretty inspirational, maybe get the kids to become interested in possibly learning the pipes, learning how to dance."

You can watch both individual bagpipe and drum competitions, as well as band competitions. Hundreds of pipers and drummers are expected to participate.

"We feel exceptionally lucky that they're coming down," said Ritelis.

SFU Pipe Sergeant Jack Lee said the band is delighted to be able to attend the Games in Enumclaw.

"We always enjoy it, as it is a tremendous ‘tune-up’ for us prior to heading to the World Pipe Band Championships in Glasgow," he said.

A highlight of the day’s events is the midday massed band, where hundreds of pipers and drummers in the pipe bands line up to play together. The bands reconvene at the end of the day to play "Amazing Grace." It’s a sight and sound not to be missed.

Ritelis said the organization is always looking for volunteers. Visit their website to get involved.

Susan Wyatt is a freelance writer for Seattle Refined, specializing in pets, gardening and all-around swell stuff in the PNW.