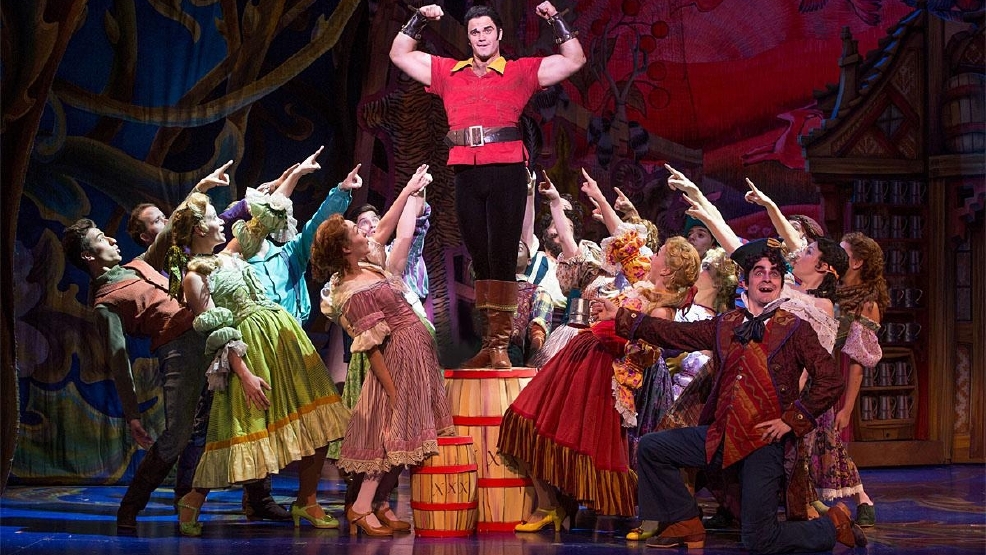 Cameron Bond as Gaston and the cast of Disney's Beauty and the Beast. Photo by Matthew Murphy
SEE MORE

I really really wanted to love Broadway's version of Beauty and The Beast that is at The Paramount this week. The Disney movie is one of my all time favorites; I was Belle for multiple Halloweens as a child, and the music is almost always in my Spotify Recently Played playlist.

Perhaps that was my downfall - every deviation the production made away from the movie, I hated.

Ok, hate is a strong word. Perhaps what I mean is that my favorite parts were, by far, the aspects of the show that they kept identical to the movie. Perfect example: the character of Gaston.

Here's a reminder of the five-dozen-egg-eating, barge-sized, thick-necked character that was my favorite in the movie (and the show).

A long time family favorite, Gaston was the highlight of the show for me. Cameron Bond played him to perfection: swagger, muscles, lack of brain cells and all. He even looked like a cartoon character up there (and his voice was eerily identical to that from the movie).

Bond's Gaston hit every note and pose on cue during his self-titled song, tied for my favorite number of the show with Be Our Guest - in which Patrick Pevehouse's Lumiere was similarly brilliant.

But besides those two numbers and Pevehouse and Bond's performances, I felt very meh about the musical. Multiple numbers were added in and made for an extremely long show, and while they are billed as written and scored by Alan Menken (the genius behind the original score, although the lyricist Tim Rice is different), I was not that impressed. In fact, I was even upset by an additional Belle song called A Change In Me, sung after she returns home to her father and is in the beginning stages of love with the Beast.

...goes the chorus, as Belle sings to her father that falling in love has changed her, and made her leave her childhood dreams behind. One of the parts I loved MOST about Belle from the movies was her independence and adventuresome spirit. I always imagined her and the Beast-turned-Man traveling the world together "after" the movie ended, and seeing all the places she sung about seeing in the beginning of the film. A Change In Me seems to imply that she's giving up on those dreams now that she's in love, but that's OK because now she has a man.

I might be looking too far into this (note - I was raised by a man who didn't let me watch The Little Mermaid because he didn't like the message of a woman willing to abandon her entire way of life, heritage, identity and family just to pursue a physically attractive guy, before even talking to him or knowing anything about him.).

The musical also swayed alarmingly back and forth on the pendulum of appropriateness. At times it seemed overly targeted at young kids (many of whom were in the audience with their parents), and then overtly sexual a minute later (Lumiere literally never stops thrusting and grinding his hips). Maybe it's just weirder to see what's obviously a man make those movements, instead of a cartoon candleholder.

Other things were hopefully just 'Opening Night' quirks - the actors' mics needed to be adjusted better with the background music: at times the audience couldn't hear what was being said over the score (Gaston's sidekick, poor Lefou, fell victim to this multiple times). In certain places the music was so loud it was painful, and beware the bright flashes of light beamed out several times during the show, which will render you blind for several minutes.

All in all - the musical made me want to go home and watch the Disney movie again (and I did, that night).