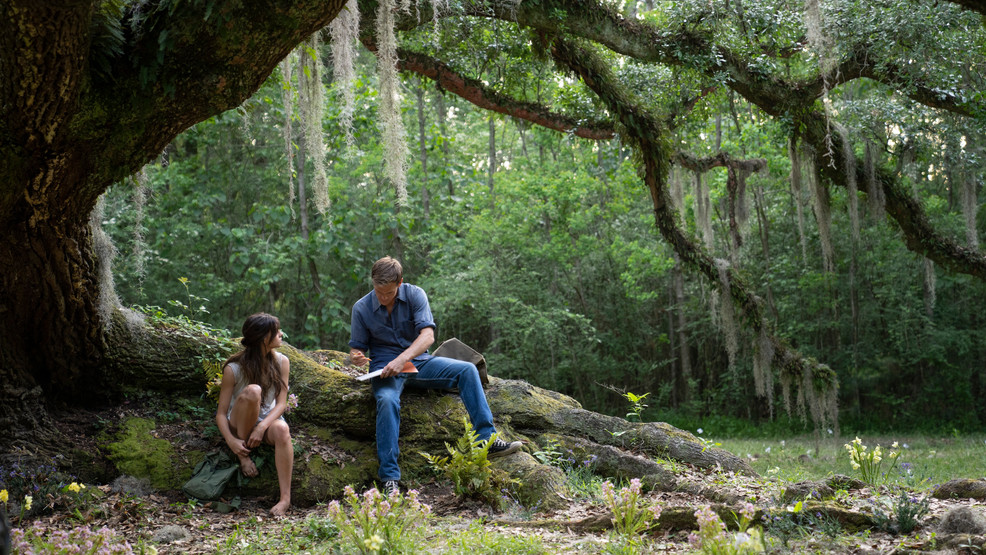 Review: 'Where the Crawdads Sing' is this summer's big romance flick

If you're an active member in a book club or find that your reading choices are greatly influenced by Oprah, chances are you've read "Where the Crawdads Sing," the debut novel of author and longtime zoologist Delia Owens which sold, as of January, over 12 million copies. That's more than many American classics like Ray Bradbury's "Fahrenheit 451" and Joseph Heller's "Catch-22". Reese Witherspoon, whose own book club endorsement helped the novel's sales and success top the charts, has championed and produced, under her Hello Sunshine banner, the book's silver screen adaptation, "Where the Crawdads Sing," a faithful, streamlined take that strums the precise and soothing notes one would expect from a book club brand with a predominantly female, middle-aged demographic. It helps that, in addition to Witherspoon, the film is backed by a talented team of she-creators, namely Olivia Newman directing and "Beasts of the Southern Wild" screenwriter Lucy Alibar penning the script.

Daisy Edgars-Jones - whose spin as dour Marianne in "Normal People" certainly helped lay the groundwork here - stars as the film's lead Kya Clark, a taciturn girl who grew up alone in the back marshes of North Carolina, a moody and generally picturesque backdrop that makes for a much prettier visual than it does the yawn-inducing page slump in the novel. Owens, who worked for over two decades in Africa conducting scientific research on its native animals, spends a hefty chunk of her prose painting, in immense detail, the water, the reeds and the endless number of creatures that inhabit the Deep South setting. In her first work of fiction, Owens turns no stone unturned, quite literally, and it was an easy and swift sendoff to snore town for some readers.

Thankfully, Alibar hooks audiences by teasing the murder mystery at the story's core, flashing between Kya's childhood abused by her alcoholic father and abandoned by her mother and siblings and the ensuing decade, which saw her falling in love and eventually fighting off a murder conviction. Framed as a light courtroom drama, "Crawdads" will handily appeal to most viewers. With a romantic setting - void of technology thanks to the 1960s timeframe - it will instantly call to mind past Southern romance classics, like early 2000s favorite "The Notebook" (though, let's be honest: any other Nicholas Sparks' adaptation would also fit the bill). In fact, the film is like a seafood buffet: there's a little bit of everything that will appease most consumers, a one-stop shop where everything but the kitchen sink is brought to the comfort of your viewing location.

Kya, who survived by baiting and catching her meals and seeking charity from locals Jumpin' (Sterling Macer Jr.) and Mabel (Michael Hyatt), is a perpetual stain on the prim and proper fabric of small-town Barkley Cove, North Carolina. The only other person to show her compassion is Tate (Taylor John Smith), who also frequents the quiet marshes. As they get older and grow closer, Tate's dreams of college and life outside Barkley Cove tear apart their happy, insular life together. Kya, content with her small, sheltered existence in the back country, rebounds with the hot, popular guy Chase (Harris Dickinson), who is the antithesis of Tate, a smarmy future car salesman projecting promises he can't keep. Both male love interests are eerily similar in appearance; it is Tate's blond and Chase's dark hair that visibly denote their good and bad intentions, respectively, to viewers.

At this point, "Crawdads" veers into stereotypical romance fodder: a fight between two men over the lead. Admirably, the film doesn't "Pretty Woman" Kya into some newly desirably, sophisticated lady. She remains the same recluse throughout, and it is simply the outside's perception of her that wavers as the film progresses. She does, however, gain some confidence in her drawing abilities, sending manuscripts off to the big cities and eventually publishing several books of her own.

The courtroom drama side of the film, led by David Strathairn as Kya's lawyer, allows the story to unfold with a predictable, convenient flow. The revelations actually energize the audience who may be playing along, hoping to reach the right verdict. Does Kya have the malice and wherewithal to murder someone, or is she just an easy target onto whom society can lay blame? The courtroom scenes are, however, still quite sterile, void of emotions except those one might anticipate. These scenes push the plot along, revealing facts and details that the past can use and expand in fuller color.

"Crawdads," both the novel and the film, aim to entertain, tug at the heartstrings and send a little quiver down your spine at true love and redemption, even if it feels less interested in what is real than it does in releasing another volume on Southern mythology. This one, a backwater forgotten child who blossoms into a beautiful, mysterious enigma, hardened by her experience but still softened when humanity finally shows her some warmth, is your feel-good, fresh-air summer romance.

"Where the Crawdads Sing" is in theaters now.