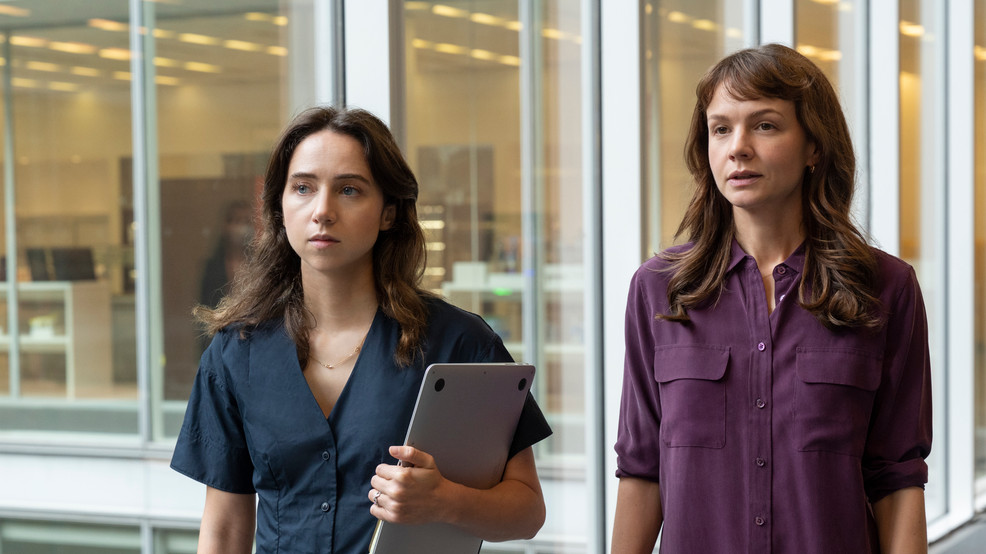 Review: 'She Said' tackles the Weinstein investigation with tenacity

Though it may feel like yesterday, the Harvey Weinstein exposé that rocked Hollywood, spurring the viral #MeToo movement and prompting a national discussion on sexism and abuse primarily against women, hit its five-year anniversary this year. Half a decade, it seems, is enough time to reflect back upon the pre-pandemic era-turned-cultural revolution; and while there are sure to be other films in the future to tackle Weinstein himself, "She Said" relays, with precision akin to the journalism ethos of truth, accuracy and objectivity, the uphill battle two female reporters faced as they attempted to break a story of assault and abuse that had gone unchecked for some 30 years.

Based on the nonfiction book by real-life New York Times journalists Jodi Kantor and Megan Twohey, "She Said" details the difficulty and often near-impossibility Kantor, played by Zoe Kazan, and Twohey, played by Carey Mulligan, faced in bringing their in-depth article to life. As other big names in Hollywood plastered headlines in 2016 for sexual indecency and correlated million-dollar settlements, like Fox News' Bill O'Reilly and Roger Ailes, Kantor, a Jewish mom of two and, as the film alludes, a writer still waiting for that career-defining story, was assigned the general task of finding more examples of sexual harassment in the workplace. She was pointed quietly in the direction of Harvey Weinstein, a magnanimous figure, both physically and professionally. He had won Oscars and made some of the industry's biggest films, but he was also known among those in Hollywood for his quiet misdeeds against the women who work for him or the naive starlets yearning for their big break.

It becomes clear quickly that getting anyone to go on the record will be nigh impossible. Weinstein had successfully hushed many of his accusers, threatened by the NDA they were pressured to sign or, for the big-name celebrities he made a pass at, the heavy threat of demolishing careers. But for two stalwart journalists, "no" is simply not the end. Like many of the better films about journalism investigations, "She Said" paints Kantor and Twohey in more colors than Weinstein who is, for the film's purpose, varnished with a single stroke as the uniform, one-note monster.

Director Maria Schrader makes the right choice in showing Weinstein namely through the real audio recordings used in his criminal cases and through the firsthand accounts of his accusers, accompanied not by reenactments, but long shots of the empty rooms where the discretions took place. The shower runs in an empty bathroom as one woman details how she hid there to escape Weinstein's increasingly aggressive advances. The camera creeps down the hotel hallways as Weinstein tries to bully another woman into spending "just five minutes" with him. It's not as dramatic or cinematic and may leave some viewers feeling emotionally empty, but it succeeds in fitting with the film's matter-of-fact telling while leaving space for the horrific visuals to breed in the imagination.

Having just reported on the sex abuse claims against then-presidential candidate Donald Trump, Twohey becomes a new mom grappling with postpartum depression, a point used to highlight the struggle all women face in the modern world. In a film that is pro-women, the point also stresses the strength women embody as they juggle careers and the demands of family. Twohey dives into the Weinstein story head-on, acting as the bad cop to Kantor's softer good cop. Twohey doesn't hesitate to meet Weinstein in person as he throws around justifications and absolution like a spoiled child; Kantor travels the world to take victim impact statements, maintaining a kind smile and eyes glinting with the threat of tears as her interviewees relay their trauma.

Mulligan and Kazan are wonderfully effective in their given roles. Their performances and combined chemistry help keep the film buoyant when it would otherwise sink under the weight of sheer information and cold factual developments. Patricia Clarkson and Andre Braugher serve as sturdy supporting players in the newsroom, and nearly every portrayal of a victim is done with reserved taste. As a film with a real-life, nonfiction element, "She Said" avoids some intricacies that would complicate the film's clean-cut storyline. Ronan Farrow and the numerous named sources from his own exposé which published days after Kantor and Twohey's have a bit role mainly to accentuate the time crunch for the Times' publication. Ashley Judd makes a cameo as herself, but no other real-life participants have a hand in the film. And while there are interesting currents running beneath the story - the ironic sexism faced by two women fighting for the truth about the abuse of other women, the angle that both Kantor and Twohey connected as parents to young kids and served as fierce mother bears in pursuing Weinstein, the emphasis on Kantor's life as a practicing Jew and Weinstein was also raised Jewish - none are quite fully realized or pursued to the end.

This does not detract, however, from the fact that "She Said" is a valuable film. It tells a succinct, interesting true story that, in many ways, liberates its players from misinformation and sets the record straight about a report that changed an industry. It has features of a powerful thriller mixed with a nonfiction drama, focusing on the heart of the story, not the buzzy background noise. With strong, talented women in front of and behind the camera, the film leaves everyone listening to what "She Said."

"She Said" is in theaters now.