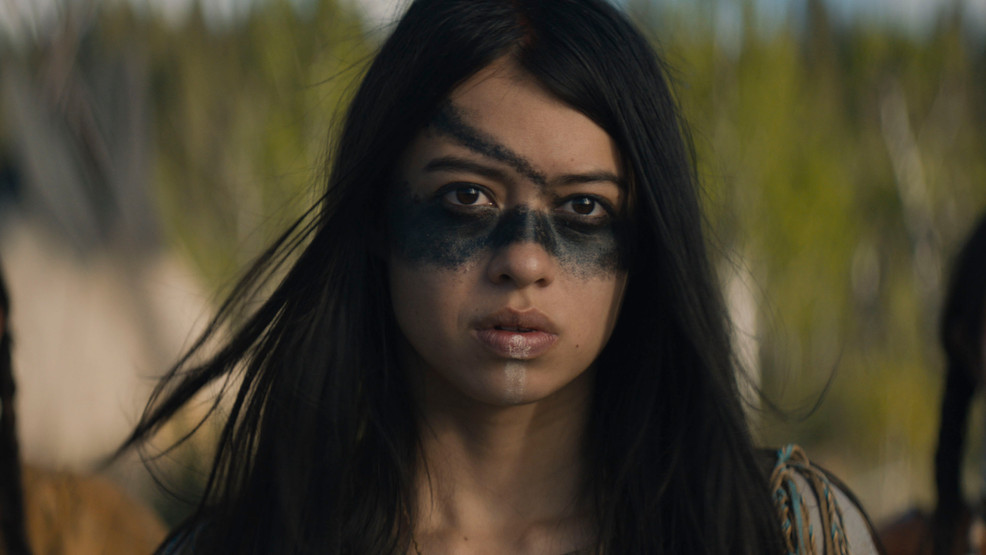 Film Review: 'Prey' is an empowering prequel to the 'Predator' world

If there wasn’t a more indicative sign of the times, "Prey," a prequel to 80s fan favorite "Predator," which perpetuated interest in Vietnam War guerrilla jungle settings and muscled, macho leading men, thankfully contains none of those things (and yes, that includes founding tank-top bro Arnold Schwarzenegger). Set in the Comanche Nation in 1719, the film focuses on Naru (Amber Midthunder), a young girl who unwittingly stalks a vicious alien barbarian, the Predator of all predators, to protect her people and prove she is a warrior equal to her male peers. There are a few guns, ones that require time and patience to reload powder between shots, but mainly the weapons employed are minimalistic and historically accurate: bow and arrows, tomahawks and hunting traps.

As if to right the egregious wrongs of its predecessors in the series – and perhaps as a nod to its movie crossover counterpart "Alien," whose female lead Ripley has clawed her way into cinema history books as one of the most audacious characters in the genre – "Prey" ticks all the boxes for modern audiences wishing to get their action fix without perpetuating stereotypes or offending an entire population of people. As a female empowerment, diversity conscious, low gun exposure monster movie, "Prey" proves that it’s not just beefy white guys who can tango with danger and outwit the devil. This sci-fi universe has just landed on a brave new world of stories to tell, and as ridiculous as an alien landing on Earth to kill people for fun may be, it’ll be hard not to get roped up in the action-packed thrill of "Prey."

The slow burn is kind of a "Predator" tradition, but "Prey" really takes its time. Naru and her scene-stealing Carolina canine companion Sarii lead us through life in wild America where the Comanche people face numerous threats to their very survival. (With the lens granted us in the 21st century, we know the precise destruction that colonists and the very government of the United State will inflict upon all indigenous people in the years that follow, which is precisely why "Prey" brings power back to the Comanche warriors, depicting them with the utmost skill, know-how and quick thinking to take on an extraterrestrial killing machine and featuring actors and producers of indigenous heritage.)

In perpetual competition with her brother Taabe (Dakota Beavers), Naru is curious and thoughtful, using her instincts and acquired knowledge of nature’s remedies in every situation. There are plenty of predators that threaten Naru and her fellow Comanche warriors, like the sharp-clawed bobcat and blood-thirsty brown bear. However, she soon discovers footprints that show something bigger and smarter than any creature of the woods she’s come across. Despite her attempts to warn her comrades, no one will take her seriously. She’s just a girl trying to break into a boy’s club. Setbacks and injury won’t stop Naru, who’s turned into a rabid dog in pursuit of the meatiest bone. Though she seems ill-prepared and poorly equipped to face the Predator, there is one thing she has in her favor: home court advantage.

Predator’s CGI work is not as sophisticated as we might hope. In fact, his notorious invisibility shield doesn’t seem to have progressed much since its 1987 iteration. However, he is still a menacing, fear-inducing specimen, particularly when we quit with the computer work and he turns into a real boy: all 6-feet, 9-inches of professional basketball player Dane DeLiegro who dons the meticulously crafted suit whose anthropod-like mandibles and advanced weaponry are a creepy crawly joy to watch in action. Screenwriter Patrick Aison writes added elements of suspense and dread with sequences that hype his presence without actually showing him. In parts, it’s easy to feel part of the hunt, or feel like one of the hunted.

To further ensure authenticity and inclusivity, "Prey" will make history as the first film with a full dub in the Comanche language. Director Dan Trachtenberg had his actors partake in a boot camp to learn the stunts and to handle the many old-school weapons their characters yield. What ends up on the screen feels not only authentic, but totally insane. The one complaint you might have is that, confined by a streaming release, there is no opportunity to see Naru and the Predator duke it out on a big screen.

Mis-advertised as an origin story, "Prey isn't much of a character dissection. Instead, it uses the sociological and geographical conflicts of the area and the era to create a truly engaging, entertaining and bold fifth installment to this 35-year-old property. The white settlers – a motley crew of vaguely-accented pirates, pillaging and plundering their way to buffalo hide and other fine trade commodities – make a welcome appearance as Naru and crew’s temporary antagonists. But it is the Predator's need to hunt for sport that becomes the focus of the film, and, thankfully, he is given plenty of targets to shoot, behead and totally obliterate to his stone-cold alien heart's desire.