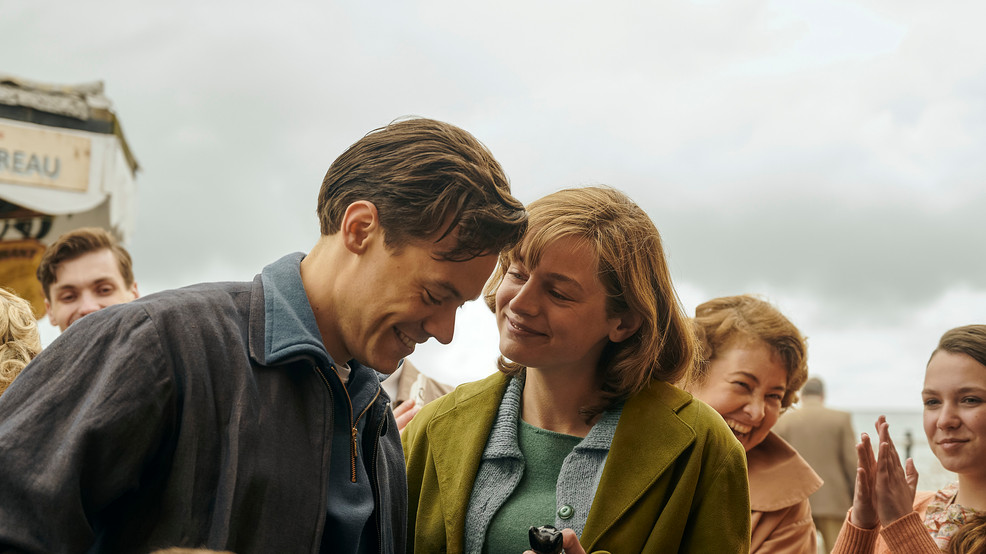 Review: Harry Styles stars in 'My Policeman' without quite shining

The queer love triangle between a married hetero couple and their cosmopolitan friend wreaks buttoned-up havoc in "My Policeman" and makes the argument that three isn't a crowd; it's a bore.

Set in seaside Brighton on England's southern coast, the film, based on the book of the same name, which was itself inspired by the personal life of writer E.M. Forster, follows Marion (Emma Corin) and her policeman husband Tom (Harry Styles), whose life together is complicated by Patrick (David Dawson), a sophisticated museum curator who lives the covert life as a gay man in 1950s England. Homosexuality was illegal and punishable by imprisonment, but Tom has been careful to keep the rumors at bay. Until, that is, the handsome, respectable Patrick enters his life.

The film weaves between the past and present, jumping around through a less-than-seamless timeline. In modern-day, Patrick (Rupert Everett) is recovering from a stroke and Marion (Gina McKee) takes him into her home, serving as his unlikely caretaker. Past discretions vibrate as an undercurrent in every interaction, every dramatic look and every peer Marion makes into the diary she found in Patrick's cardboard box of possessions. Tom (Linus Roache), angry for reasons unknown, refuses to see his former lover and lashes out at Marion for her part in the unwanted reunion.

Revealed through spurts of sweet, albeit listless flashbacks of flirtatious conversations and cheeky implications from their younger lives, Tom and Patrick fell in love, and Tom, very concerned by public persona and his high profile job, used Marion as a glorified beard to protect his public standing and allow his true love to blossom with the other man. Marion's innocence and naiveté come off as grating traits for a lead who, despite all the telltale signs, is blind to her husband's infidelity and sexual preference. There are few interesting aspects to the character at all, and Corrin, whose naturally meek and mouselike persona makes her even less beguiling.

Likewise, Styles' alluring white smile and signature smolder seem to be watered down to show his work as a "serious actor," making his character's surface charm far less endearing. All the more frustrating is that Tom doesn't seem to do much work in his capacity as a policeman; in fact, even though his profession is in the film's very title, he comes across as a Halloween costume, wearing the uniform, wandering the streets for a bit of candy and performing zero of his career obligations.

This "playing the part" is perhaps what makes "My Policeman" feel so void of texture and color, like puppets moving and emoting but telling an incoherent story. Corrin and Styles have opposing energies which results in negative chemistry, and it isn't hard to lose interest in their love story before it has even commenced. Apart from their carnal attraction, Tom and Patrick share some cheeky, surface discussions about art, but are otherwise either in bed or arguing on how best to hide their relationship. At no point do we feel like we know these people, their plight or their motives, particularly to support a 113-minute runtime.

The three leads are poised in nearly every scene like polite strangers, holding the door open for one another, but never taking the step through themselves to elevated performances or an enchanting ensemble. As Tom and Marion settle into married life, Patrick's presence initiates a tug-of-war for Tom and within Tom who is struggling to defy society's expectations and legal restrictions. Ultimately, they all make choices that lead them to the present. Patrick is unable to avoid the bad luck that fate has in store for him, and the greatest sympathy, empathy and camaraderie the audience will feel is with Patrick, born the right way at the wrong time.

As the film meanders towards its final revelation - no need to clutch your pearls for this one - it leaves audiences without a moral tagline. The straight woman, who was used by her sexually-confused paramour and continued to live on with him in what seems to be a lackluster marriage, is she the villain? Is it the cop (not the best climate for a policeman as the titular romantic lead) to blame? Society? Certainly, the persecuted gay man is the victim here, forced to the shadows and degraded to back alleys, but is he guilty of wronging someone, too? Don't expect "The Policeman" to answer any of the questions it meagerly poses.

"My Policeman" is in theaters and streaming on Prime Video.