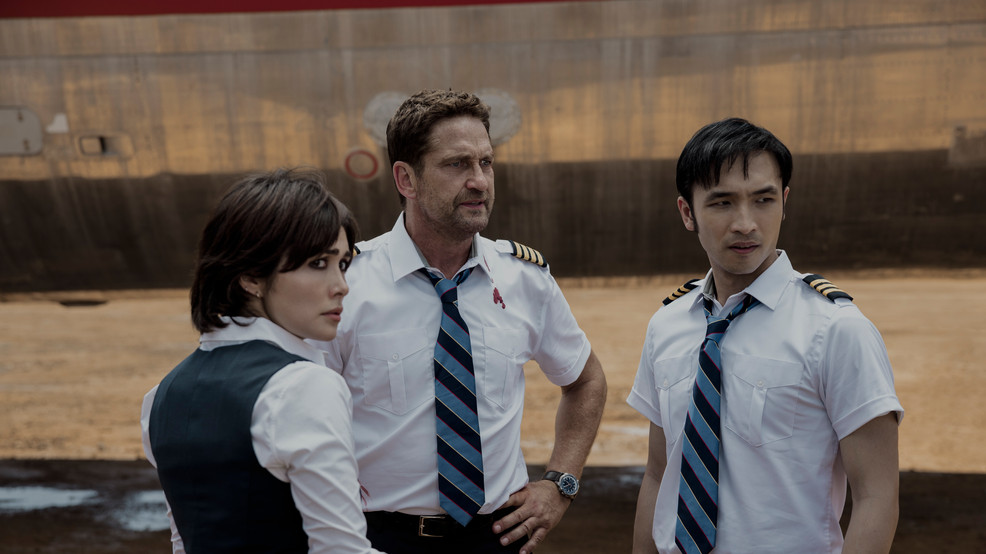 Review: Gerard Butler's 'Plane' is a turbulent but fun ride

If there were such a genre as "horribly fun action" then Gerard Butler would certainly serve on its executive board. When you sign up for a Butler-led film, you've checked reality at the door and agreed to follow wherever the hunky Scot wants to bulldoze, snipe or burn to the ground, usually on some ridiculous quest to protect the president or battle a cataclysmic man-made climate disaster. In "Plane," the turbulence is rough, the landing barely sticks, but yet again, the ride is, you guessed it, horribly fun.

After years of roles with his barely passable American accent, it's a relief to hear Butler's Scottish-raised timbre. Butler stars as Captain Brodie Torrance, a veteran pilot relegated to a third-tier air carrier called Trailblazer, the kind of airline where customers clap upon each successful touchdown. With a few attendants and a handful of passengers, including a convict (Mike Colter) accused of murder, traveling on New Year's Eve through a massive storm, Torrance and co-pilot (Yoson An) lose control of the plane, narrowly avoiding a fatal, bottom-of-the-ocean plunge like the ones that plagued headlines a few years ago in this same part of the world. They manage to save lives and ground the aircraft on the nearest patch of land... which unfortunately is a sparse island off the Philippines run by violent extremists.

If you're thinking this is just too ridiculous to watch, you're wrong. It's too ridiculous not to watch, and the premise continues to gain traction into lunacy with every passing decision Captain Torrance makes. With help from lead stewardess Bonnie (Daniella Pineda) and the unexpected (but also totally expected) cooperation of the prisoner, an ex-militiaman with impeccable training, bullseye instincts and muscles for days, Torrance refuses to leave any passenger behind. With a quick change into his action-flick casual tee that is never not drenched in hardworking sweat, the captain traipses through the unknown jungle for a way to phone for help, only to discover their precarious predicament and merciless assailants.

French director Jean-François Richet keeps the film moving at all costs. There are few lingering shots or unnecessary bits of fat. "Plane" is a lean action thriller that still manages to develop its characters and, despite a plot that takes the formulaic avenues at every crossroad, keeps viewers intrigued and, dare I say, invested in another iteration of Butler's brawn-and-brains archetype. Arguably, this film could have been called "Plane Has Fallen in a Geostorm," a fourth in the "Olympus Has Fallen" trilogy with a "Geostorm" crossover, but there is enough originality and solid suspense building to set "Plane" on its own special trajectory in the audience's memory.

Back in New York, Trailblazer honchos bring in the big gun crisis expert Scarsdale (Tony Goldwyn), whose off-the-books relationship with military-grade bounty hunters proves to be the best option as they fight against the clock. Junmar (Evan Dane Taylor), the manic, bloodthirsty leader of the island's band of rebels with easily the best villain hair since Davie Bowie in "Labyrinth," has a taste for kidnapping and ransom trolling; a plane of North American passengers held at machine gunpoint is precisely the global headline he's eager to write.

Though it sounds too cinematic to be real, the volcanic island of Jolo is historically known for its geographic and political volatility, a haven for separatists and rogue rebels with an ugly history, past and present, with the Philippines. There have been well-publicized hostage incidents over the years, and, it seems, screenwriters Charles Cumming and J.P. Davis have found a totally plausible avenue for their outlandish story without improperly and inappropriately villainizing an entire people. As the walls begin to narrow around them, Torrance and the stranded fliers are left with fewer options to survive their crash landing. In the epic finale, Torrance uses his bravery and ingenuity to slip past the flying bullets of their automatic guns and the threat of obliteration by their bazookas to finish what he started and get his plane to safety.

As air travel has opened up this year, the first true year of flying post-pandemic, it only makes sense that we'd get an action-thriller about falling from the sky and being marooned on a foreign, water-locked, antagonistic nation. A representation of our collective fears, part fluke disaster film, part survivalist adventure, "Plane" has no qualms about its altruistic hero, its storybook villain or the chaotic plight of an otherwise average group of people.

"What would you do?" the film asks, "in this situation? Who would you turn to for help?" The answer, without hesitation, is to find Gerard Butler and follow him to the ends of the earth.

"Plane" is in theaters now.