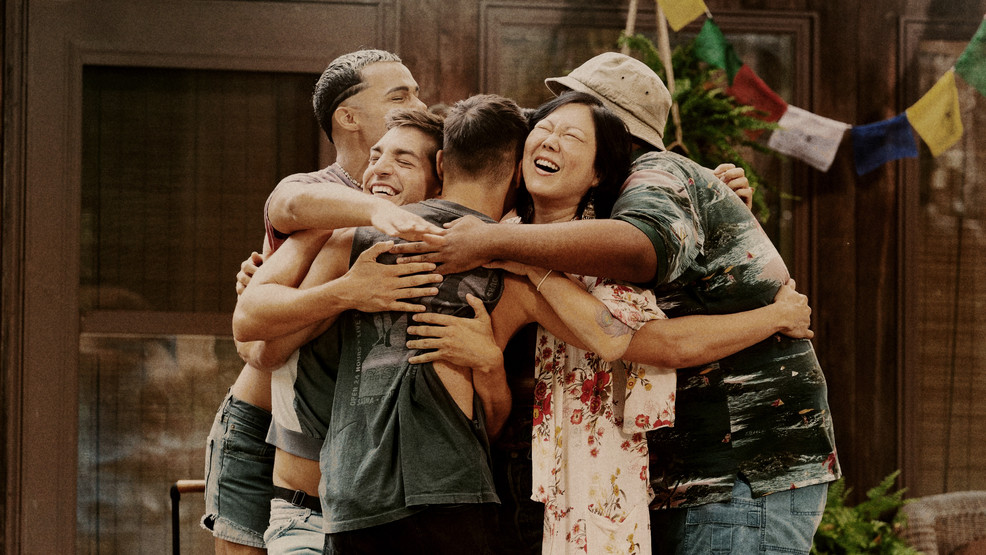 Eighteenth-century English novelist Jane Austen (a fan-favorite of "old soul" young girls and grown women with a deep desire for fairytale romance and heteronormative happy endings) has been quoted and adapted too many times to count over the ensuing centuries. But Austen, who often detailed the restrictive situations facing the women of her time, could never have foreseen the inspiration her work would serve for "Fire Island," a cheeks-out rom-com that celebrates queer love and, more specifically, brings the Asian-American gay experience to the forefront.

Though it is likely Austen had only one type of "pride" in mind when she titled her most famous work "Pride and Prejudice," writer-star Joel Kim Booster has reclaimed her title, transforming Netherfield into Fire Island, largely considered the most LGBTQ-friendly resort community in the United States, and reimagining the Bennet sisters as five gay men, a "chosen family" with a brash lesbian matriarch Erin (Margaret Cho) and a vacation home that gay dreams are made of.

Despite its very specific targeted demographic, "Fire Island" is widely accessible. As a heterosexual female viewer, I may not get every reference, but the heart and humor of Booster's script are, to quote Austen, "truths universally acknowledged." Originally set to premiere as a series on now-defunct Quibi, the film landed on Hulu, whose holiday LGTBQ+ rom-com "Happiest Season" two years ago set the momentum and opened the door for more queer stories, particularly those telling full, unfiltered stories about the realities of love for those searching. In this case, Booster sticks tightly to the main plot points and characters of Austen's work, but with an added flare that thankfully puts the fire in Fire Island.

Booster stars as Noah, our Lizzie Bennet he-roine, determined to find his BFF Howie (Bowen Yang), our Jane, a fun fling to lighten him up and get him out of a love rut. Unlike its 19th-century source material, marriage is hardly the focus; sex is a much more desirable commodity in a community of testosterone-rich men, but love is certainly also not off the table. Between the epic island-wide dance parties and after-dark, drug-fueled house hangs, feelings are sticky and muddied by snark and gossip. Factor in race and differing socio-economic classes, it's clear that some things have hardly changed since Austen released her novel over 200 years ago.

Mr. Darcy aka Will (Conrad Ricamora) makes his prejudiced debut as a snooty lawyer running in a circle of wealthy gays, visibly turning their nose down on Noah and crew. Will's best friend Charlie (James Scully) takes an immediate interest in Howie, and then it is off to the bikini-clad, innuendo-heavy races as opinions are misjudged and words misconstrued. Austen's prim and proper decorum may have hit the cutting room floor, but the heart of "Fire Island" rests resolutely with her characters, lovingly and thoughtfully reimagined by a gay, Asian-American artist. That is the greatest feat of the film: Booster gives us a glimpse at his very personal human experience in a story that is immediately identifiable and easy to love. The Bennet sisters have always been revered as literature's royalty, but here, they find fresh life as kweens.

At times, the film gets lost in its talky explanations and over-analyzation of motives and feelings. This is easy to ignore in a period piece and less entertaining in stories set in the modern-day. But luckily, no single scene lingers too long, and the action and interactions propel the many relationships forward quickly, while still organically. Booster and director Andrew Ahn don't water down the realities of being a gay (and BIPOC) man searching for connection. His sexuality and race are explored with confidence and humor. We yearn to see Noah and Will find their happily ever after, to quit with the catty assumptions and learn to accept one another.

The physicality of these relationships is embraced with intimate, precise detail, and Fire Island's community is portrayed with colorful, visceral, personal adoration. The all-gay cast has a handle on the authenticity of their portrayal, and at no point do we cringe watching an obviously straight actor attempt the glorious flamboyancy of Keegan (Tomas Matos), the Kitty Bennet character, or the chiseled-jaw, tight-short-wearing cockiness of Dex (Zane Phillips), our naughty Mr. Wickham replacement. Noah and his chosen fam are rightfully proud of who they are, which allows us to leave any prejudices at the door and enjoy a savagely charming romantic comedy for the ages.