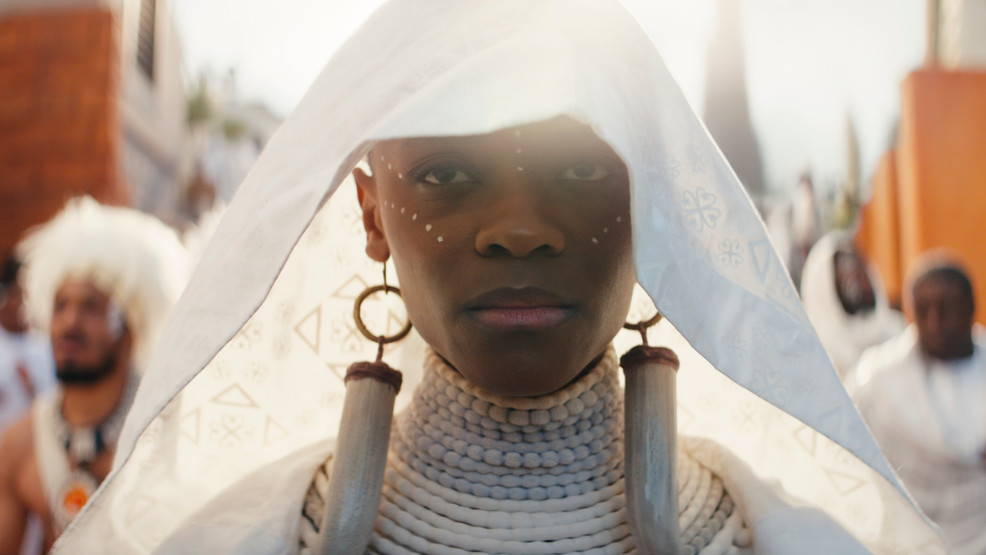 'Black Panther: Wakanda Forever' powers on with nods to Boseman

A tragic first for any franchise within the MCU universe, "Black Panther," the $1.3 billion smash hit turned cultural phenom, lost its mega-popular leading superhero Chadwick Boseman in 2020. As the film's crew and fans alike mourned, director Ryan Coogler was faced with an impossible decision: honor the late actor by continuing the story or allowing his iconic turn as King T'Challa to rest in cinematic peace. Written and directed by Coogler, "Black Panther: Wakanda Forever" splits the difference, respecting Boseman's legacy by dedicating the film to him and carrying on his memory with a nearly 3-hour-long eulogy that reflects the mourning period for both the actors and their on-screen counterparts.

Recasting Boseman's renowned part was never on the table, so "Wakanda Forever" opens with the sudden death of T'Challa. His sister Shuri (Letitia Wright), a whiz kid scientist, can't find a cure in time and is left reeling in this new reality. With a sudden thrust from supporting figure to leading role, Shuri (and Wright) take on the hefty chunk of the emotional and physical weight in "Wakanda Forever". Luckily, there is a supportive sisterhood that dominates the film and carries her when she needs fortification. Angela Bassett rules with a firm, masculine power as Queen Ramona. Danai Gurira returns as Okoye, the bald-headed warrior and General of the all-women royal guard, the Dora Milaje. And Lupita Nyong'o, a strong addition to any film, is back as Nakia, an undercover Wakandan agent tasked with spreading humanitarian efforts in underprivileged parts of the world.

This time around, the isolated nation is not threatened by deranged rogue invaders or an insurrection within its own family, but by the entire war-hungry world eager to steal Wakanda's very potent and dangerous stash of vibranium, an indestructible element that supplies fertile soil and allows for their futuristic technological advances. Equipped with a revolutionary machine able to detect vibranium, military treasure hunters discover some of the meteorite material in the depths of the ocean. Before they can extract any of it, their military tanker boat falls under siege by an army of blue sirens whose sing-song screams hypnotize operatives into walking off the boat.

It is their leader (Tenoch Huerta), known to his people as K'uk'ulkan which translates to Feather Serpent God and Namour to everyone else, who proves to be the greatest threat. His followers obey him without question, he has winged feet and he can swim as fast as he can fly. Born a part-human, part-mutant, Namour is a fierce opponent, though it's clear he isn't interested in fighting for the sake of it. Threatened by the world's obsession with obtaining vibranium at any cost, Namour sees the writing on the wall and wants to nip it in the algae bud before it has a chance to bloom.

His sovereign kingdom of Talokan, located in the depths of the ocean, has existed for centuries, unbeknownst to the rest of the world and the greedy political powers hellbent on acquiring vibranium. With the development of the vibranium detector, Namour demands that the machine's inventor is brought to him to be sacrificed, thereby, hypothetically, preventing another machine from being made and allowing the secret of Talokan to remain thousands of feet underwater.

Namour and the Talokan aren't as fearsome as MCU villains past, namely because we know they turn into the sometimes allies of Wakanda. It doesn't help that the "Avatar" sequel is out this year, with trailers running rampant. Comparing the Talokan, with their comically blue skin slapped-on by CGI, to the sophisticated computer work of James Cameron's intricately crafted cerulean characters, is nothing short of cruel.

Luckily, Coogler has other needs for Namour, serving as an example for Shuri of how a leader should not allow grief to overcome them, instead using one's love for the people to drive intention and find strength. Powerful, though not particularly menacing, Namour is a fine starter villain for "Wakanda Forever," a sequel that finds itself in the precarious situation of having to start over and creating a new space for another Black Panther to thrive, with characters who must push forward into the spotlight or fall back to the bottom of the call sheet.

Shuri and Okoye make it to MIT student Riri (Dominique Thorne), creator of the vibranium finder. After a few dashing chase sequences and a trip to the ocean floor, Shuri is confronted by the difficult truth: losing someone never goes away, but letting it consume you will block all of life's forward progress. Leaving plenty of room for fan catharsis, Coogler tackles yet another introductory superhero film while managing the secondary undertaking of treading lightly over the beloved protagonist who broke hearts everywhere with his passing. Dedicated to Boseman, "Wakanda Forever" has him lurking lovingly in every scene.

As Shuri proves herself to be an able leader, audiences are ready for her to don the suit when the time finally comes. Like the first film, there is action, suspense, drama and humor. Anchored by strong performances and chemistry carried over from the previous movie, "Wakanda Forever" argues for Wakanda as a world power. The new queen is ready to rule.