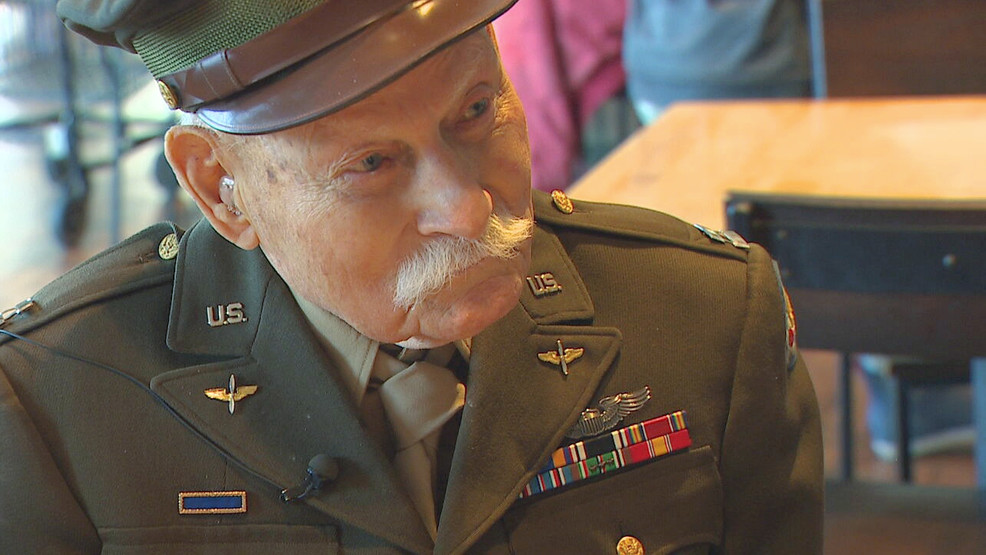 Art Palmer walks into a closet in his home and opens the bottom drawer of a metal cabinet. He pulls out a small cardboard box.

Art, principled and disciplined, is 103 years old and the thing inside the box saved him long ago.

He was born in 1919 and spent his boyhood in Morristown, South Dakota, which wasn't so much a town as a tiny outcropping of buildings dropped haphazardly in an endless, flat prairie. Art has a picture of his hometown, and it's hard to tell if there's even a single road. No sidewalks or yards. Just a church, some buildings, and some barns huddled together in the plains.

There is another picture, a family picture from the early days of Art Palmer's life, and it's stunning. A husband and wife and four children. All of them are barefoot, except the father, who is in work overalls and boots.

The little boy in the middle is Art. His pants are rags, his fingers are at his lips. His sisters look shy. His mother has her arms crossed in front of a simple dress. She looks tired but strong. His father has a baby on his leg and he's looking down at her. The people in the picture have known despair and hunger.

Those were Dust Bowl years, when severe drought, coupled with farming methods that didn't prevent wind erosion, created great dust storms that stripped away topsoil and blew away farms, and futures, on the American prairies.

When Art was 17, he and his parents hopped a freight train that was headed west. They left the other five children on the farm with the oldest daughter. They were looking for work picking fruit.

They ended up in Spokane and found their way to Yakima where they picked hops for a time.

It wasn't much, but they knew they couldn't stay in South Dakota, so they went back for the rest of the family. They loaded everything they could in a Model A Ford and started west again, abandoning their farm and the Dakotas forever.

They headed for Walla Walla. Art remembers it all.

"We ran out of money and couldn't eat that first night when we got there. But my mother and sister got a job picking tomatoes. So then we had tomato soup."

Art and his father got a job hauling hay.

Talking to Art now, he is understated and stoic.

I asked him, "You've lived through some hard times in your life haven't you?"

"I didn't evaluate how hard or soft," he replied.

They picked fruit and worked hay. Art worked in a cannery. Hard work, because hard people did what they had to do to survive hard times. The Palmer family scratched out a life.

By 1944 he was a B-24 pilot, part of the 98th Bomb Group. He dropped bombs on refineries and railroads and bridges at a time when the world had lost its mooring. He dropped them in Northern Italy and Austria and Germany.

He tells harrowing tales of those missions. Like the mission to bomb Regensburg, a German city on the Danube River.

"It was 51 degrees below zero," he recalls, "and we didn't have heated flying suits. So here we are, pilot and co-pilot," and he swings his arms against his body to show me how they were trying to keep blood circulating. "Trying to keep from freezing our fingers," is how he puts it.

"There was constant fighter attack for an hour and fifty minutes," he said. He tells how there was a line of B-24s heading for their target, being attacked by fighter planes.

"We were number four. Numbers one, two and three had already been shot down, and the fighters were looking to put us in their sights."

He tells his stories in great detail, but with no hyperbole, which somehow makes them all the more enthralling.

"But when we started getting close to the alps the Tuskegee Airmen showed up and scraped the Germans off and, my gosh, what a joy."

He flew 49 missions and survived. One more, the magic number 50, would get him sent back home for good.

Anxious to get that last one done, he volunteered to be a Waist Gunner for another crew that was short a man. "Glory be," he said, "I got a trip on the easiest, safest plane in the group, the lead airplane. I was a guest, and I was on the right waist gun."

"So anyway, it was a beautiful day, a nice sunny day, an easy trip. And we got to the Danube. And suddenly there's a big concussion in front of the airplane."

A shell had exploded right under the front of the plane. Two navigators and a bombardier were killed immediately. He said he looked up through the bomb bay, a compartment in the fuselage where bombs are held and dropped, and he saw flames. Some crew members jumped out through the opening. Art signaled the tail gunner and the other waist gunner, and then he jumped out.

He wore a chest parachute pack. "I waited a long time to open (the parachute) because I didn't want the gunners to practice on me," he said.

Once on the ground, he eventually found two other crew members who'd made it to the ground safely. The three of them wandered the woods south of Vienna for more than a week.

"One morning," he recalls, "we found some wild strawberries. I got about a tablespoon of those. That was the only food I had in eight days."

I asked him, "Even now, are you ever just amazed that you survived even that far?"

"Well, of course," he replied. "It's a miracle. everything in my life has been a miracle," and then he laughed.

Without food they became more and more desperate. They'd been taught to look for a solitary home or farm away from others, but they couldn't find any like that. When they did come across homes or buildings, they were always connected to other homes with walls around them.

Finally, they saw three young girls in a shed trying to get out of the rain. They approached, and communicated that they needed food. The girls led them down a trail, and they came across a farmer. The three Americans took a chance and tried to explain their situation. The farmer indicated that they should follow him, and they did.

He led them to German soldiers in an armory, and that was that.

They were taken prisoner, interrogated, and eventually sent to a prisoner of war camp called Stalag Luft #1,

Art Palmer spent 10 months there. He said they weren't mistreated, but the food wasn't good.

I'm struck by Art's telling of the stories. He doesn't speak of fear or pain. He doesn't embellish. There is no hyperbole whatsoever to his tales. So I asked him about it.

"You don't seem emotional about that time. You don't seem to have the need to tell the world how difficult things were, you're just matter of fact. Why is that?"

Art glances down, thinking, and for a moment he's gone away.

Then he looks at me and said "Well, just the facts, sir." And he chuckles.

At the end of the war, the Germans fled the prison camp, and the Russians came in and liberated Stalag Luft #1.

Art was a free man.

"You must," I said. "Even now at 103, be amazed at the things you've been through, from the dust bowl to the bombing to the prison camp."

Art said something that amazed me. "Well," he said, "the hospital was the worst."

His back was a mess. Erosion of the vertebrae. He would spend the next three years in military hospitals.

They kept telling him his back was getting better, but they were wrong. He became frustrated and angry. Everybody else was getting on with their lives, but he was stuck. And depressed.

Until a nurse showed up at his door one day, dressed in white.

Remember that small cardboard box? He opens it up and very delicately pulls out a little origami bird, made from x-ray plastic. It's called a Bird of Paradise.

He holds it up.

"When I saw that gal standing in the doorway with this," he remembers, "I suddenly realized that I'm showering my depression on everybody else. And this little guy right here changed my whole life. I turned my valve over to optimism instead of pessimism."

"Was it just understanding that somebody cared?" I wondered.

Art said, "Yes. That was the biggest thing that I was looking for."

A new doctor looked at him and recommended surgery. He had the surgery and got well. He left the hospital and got on with life.

He got married. He had a family. He lived.

In his home outside Mt. Vernon, Washington, where he lives on his own still, he still has his dress uniform.

Once a year, on Veteran's Day, he puts it on.

The shirt, the jacket, the hat. He wrestles with the tie and some of the buttons.

All of it still fits. And as he glances in the mirror, adjusting his hat, he cuts a striking figure.

On this morning Art gets in a car and said, "Off we go," and his daughter Mary Kate drives him to the Haggen store down the road. There's a Starbucks inside, and when he walks in it's apparent to everybody that here is something very special.

There are hugs. A woman said, “Thank you for your service.”

He works his way to a room where other veterans and admirers are waiting, and when he walks in they all stand up, applauding.

"How you doing, Art?" one uniformed man said.

A woman who works at the store says, "Can I have a kiss please?" and she plants one right on his lips. Art smiles and said, "Well, the other guys were kissing the girls when I was flying, so I get my turn, too."

They stand for a time, greeting Art. Then they sit down and talk. He tells some of his stories and his listeners shake their heads in wonder.

Veteran's Day for this man is a celebration of duty and survival.

People like Art Palmer say astounding things without even trying.

I asked him, "What does it mean to you that you served your country?"

He paused for the longest time, lost in thought. Then he looked up and said, "Well, I wanted to put my shoulder to the wheel. And I did that in this way."

He wanted to put his shoulder to the wheel.

Simple. To the point.

But do you see what he did there? He called hungry days in the Dust Bowl, fifty missions in a B-24, 10 months in Stalag Luft #1, and three years in military hospitals, "Getting used to life."

"Well," he said, "I would say that it's been amazing, and I would expect it to be the same for the next whatever time I've got."

What a man, indeed.