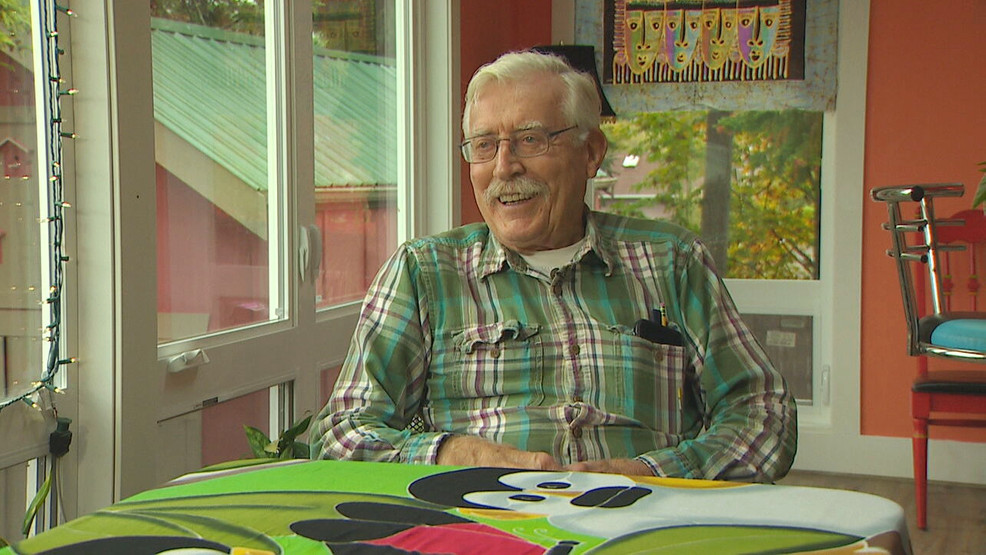 Eric's Heroes: Poulsbo Bill beams with pride for the city he helped build

Everywhere about him is evidence of a restless, ambitious and creative soul.

His home has been transformed, part of it at least, to resemble a lighthouse.

There is a beautifully crafted treehouse resting on not one, but two trees.

There is a giant built-in pizza oven on his patio.

His name is Bill Austin, and he loves to do two things: paint signs and build things. He's 87 years old, and it's time to take stock of what he has done.

He looks like a cross between the actor Donald Sutherland and Dick Van Dyke.

And he's an unusual guy. He says things like, "Vacations to me are a waste of time."

Or, "Am I a narcissistic son-of-a-gun or what? I don't know and I don't really care."

There is no false modesty about Bill. A lifetime of accomplishment has left him self-assured. He doesn't try to convince anyone of his humility. What he has done he has done. And those things speak for themselves.

"Most garages are never big enough, you see, but this one is big enough," he says as he takes us into what he calls his "Garage-Mahal."

It's big alright. Big enough for his small collection of British automobiles. A couple of Jaguars, a Rolls Royce and an old Austin 7 from the 1920s.

And big enough to hold all his paints.

He's currently working on a sign that says, "Velkommen" in gold letters against a blue background. He uses what is called a Mahl stick to steady his arm, and it's an astounding thing to watch him free-hand letters. The lines are perfectly straight, as if they were printed by a computer, except somehow better. the hand is still steady and the eye is still keen.

He left England because, as a young man, he felt trapped by the class system there.

"My dad was a lorry driver, a truck driver, and that was it. Once you're there, that's where you are going to be forever, and there was no way I could get any better than where I was. I was going to be stuck there, I thought. So I left."

"It looked gray, it looked cold, it looked dead to me," is the way he puts it now.

There was a center senior citizens that he found particularly depressing.

"I saw these little old people sitting there and I thought, 'This is no way of life after doing your stuff for 80, 90 years or whatever.'"

So he made an offer, got some donated materials together and designed and built what you see today on Front Street, a beautiful, yellow building with a clock built into a little steeple. There are flower baskets under the windows and ornamentation. It's called the Senior Citizen's Lounge, and it's lovely.

It was a bright and beautiful beginning to Bill Austin's mission to remake Poulsbo.

He started painting signs for businesses. One after another. Sluys Bakery. Boehms Chocolates. JJ's Fish House. Liberty Bay Books. Each of the signs were classy and colorful. Each of them added to the "feel" of the place.

I asked him, "Did you start out with a vision for what you wanted it to be?"

Not long after he noticed something else that needed doing.

"We had a volunteer fire department way back in the early 70s, and they played musical instruments, and they didn't have a place to jam," Bill says. So he went to work.

He created a model, and made a proposal. And then he built a pavilion on the water. It has become a gathering place for Poulsbo, in some ways the heart of the town. It is called "Austin-Kvelstad Pavilion."

And he kept creating signs down through the years. The Martitime Museum. The Green Light Diner. Poulsbo Drug Store. Cat's Meow Antiques.

Then, at some point, Bill started designing and building storefronts. Each one was unique.

If you walk with Bill along Front Street, he'll show you all the store fronts he designed and built. "I did that one," he says, "and that one. And the one next to it."

In 2011 there was a muralist in town named James Mayo. Bill came up with an idea. The building that houses Boehms Chocolates featured a giant blank wall, so he got permission and got some money raised, and commissioned Mayo to paint a giant Viking ship on the wall.

Today, it's one of the most photographed places in all of Poulsbo. A steady stream of tourists pose in front of it all summer long.

And if you look closely, peeking out from behind a blue tarp, there's a distinctive, bearded, gray-haired man. That's Bill Austin.

If you go to the Poulsbo Cemetery, you will first be met by an entrance arch that was one of Bill's projects. And then, once inside the cemetary, you will see a gorgeous white gazebo on the grounds. It looks like something that could be found on Thomas Jefferson's estate. That's Bill's too. He designed it, and with the help of donated labor and materials, as well as funds from the City of Poulsbo, built it too.

The list goes on and on. That immense Viking statue on the West end of town? Bill envisioned it in 2012, and made a rough drawing. Scultor Mark Gale was commissioned to create it, and he improvised based on the drawing, and the result stands now on Lindvig Way in what is known as "Little Norway".

That's the way it works with Bill Austin. He sees a need, or dreams up an idea, and then goes about making it happen. Have you ever seen the concrete seashell spiral in Oyster Plant Park? The spiral gets smaller and smaller and the American flag pole stands in the middle. Bill worked with the city and Kitsap Country to create it. Building round concrete forms is no easy task. Bill constructed the forms and poured the cement himself.

So many of the things about Poulsbo that we find pleasing have been touched in some way by the hands and imagination of Bill Austin.

He painted and restored the old street clock on front Street. It is dark blue with gold leaf.

He brought in a red British phone booth.

And the signs. They are everywhere. And to visit the town with Bill is to realize just how incredibly important signs are to the look and feel of a town.

A guy from the barber shop comes out and puts his arms around Bill. "Best guy in Poulsbo, right here!" he yells.

He says he has free coffee for life at Hot Shots Java.

"They'll be carrying me outta here feet-first one day," he says. "This is my home. I ain't going nowhere."

It's a home he helped build. But not without pushback. he's been accused of trying to turn Poulsbo into Disneyland. Bill doesn't seem to mind.

"I know it works you see. I know it works. This is now tourist town USA, and I see people taking pictures of everything that I've done so that makes me feel good!"

It's true. Poulsbo is thriving. The sidewalks are full. The city is alive.

"Have you got it just about where you want it now?" I ask him, as we look around at his influence.

If he wants to rest, he has certainly earned it. Burt I'm not going to hold my breath.

When you have visitors in the Seattle area, and you're trying to think of something to do with them, taking the ferry trip to beautiful Poulsbo is a can't miss idea.

The place looks like a European village. It's bright and inviting. The colors, the storefronts, and the signs all combine for a wonderful "feel". There is eye candy everywhere, things to look at and explore.

That's because of Bill Austin, a restless, ambitious, endlessly creative soul whose gift to the city he loves is its very identity.