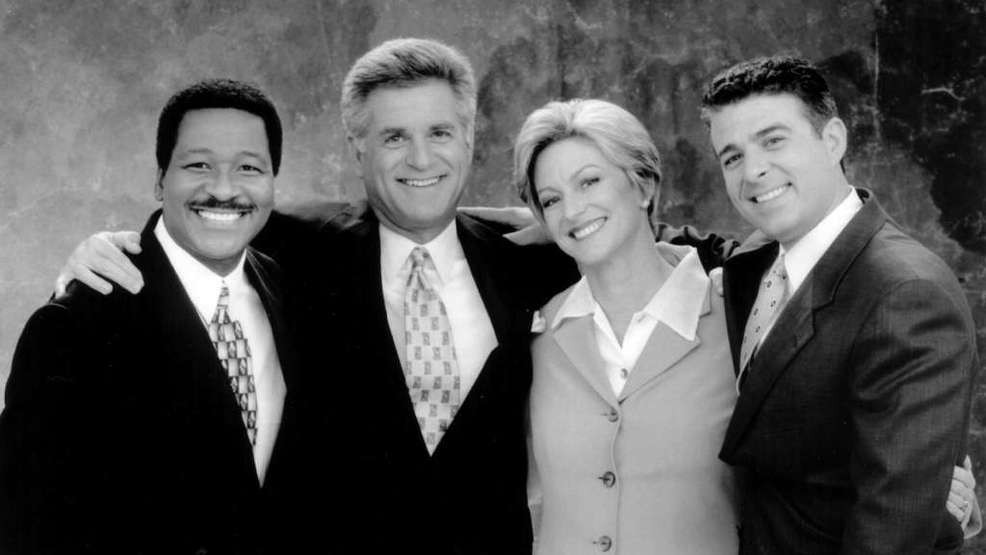 Today, we aired a special version of the Seattle Refined show. If you've watched the show before, you know we love a recurring segment we do called Party of Three, where we invite three guests to a Seattle spot for good food and conversation.

Our latest iteration takes place right at the very top of the Space Needle, at the popular SkyCity Restaurant.

For more than 20 years, they sat side-by-side, delivering the news, weather and sports on KOMO 4.

Dan Lewis was KOMO's main anchor for 27 years, before retiring in 2014. To this day, Dan and his co-anchor Kathi Goertzen are one of the longest running anchor teams in the country. He's simply a legend.

Eric Johnson took over for Dan on the anchor desk, but has tugged at our heartstrings for decades with his inspiring storytelling. He's won multiple Emmys. He's even won a national Edward R. Murrow award for Best Feature Story in the country.

But no one has been at KOMO longer than weather expert Steve Pool. You've welcomed him into your homes for more than 40 years. He has more than a dozen Emmys and 80 guest appearances on Good Morning America.

There's a lot of history between these three, and as you can imagine - there's a lot to catch up on. Starting with Dan's new life...

"I still watch every day," said Dan. "People didn't believe me when I worked there when I used to say I watched over the weekend. But you gotta know what's going on in your community. To me it's important."

But even though Dan isn't on KOMO anymore - his hair is still outstanding.

"You gotta admit, it's iconic," said Eric. "I think it was Kent and Alan who said, the safest place to be in case of an earthquake is under the northwest corner of Dan Lewis' hair."

If you combine Eric, Steve and Connie Thompson's years in the business - it's well over 100.

"And in 150 years how much wisdom was accrued," said Eric. " Lots of knowledge very little wisdom."

Eric and Steve are still on air every day, but were curious about Dan's life after journalism.

"I'm generally curious about this because I've wondered - when I retire from the business, am I gonna still first thing in the morning turn on the radio?" asked Eric.

"I still - as I did for 27 years when i worked for KOMO television - I still wake up to KOMO news radio," said Dan. They'll be happy to hear that! "It's just important to me especially at the beginning of the day to know I didn't miss something big overnight. And my big fear, to be honest, and it has been for many many years now - is that it's gonna be a breaking news story about something really really bad that's happened in the world. So every day when I wake up and I hear some joviality I think; great, great, life goes on - life goes on."

But Steve has to deal with something Dan and Eric never did.

"I am the only person who talks about what will happen instead of what did happen," he said. "And there's a certain accountability that goes with that."

"Even if he's wrong, he'll find somewhere where he was right," laughs Eric "It rained on the tip of the peninsula or something."

"When I first started people would come up to me and say 'Hey Steve, how's the weather?' And I'd literally go - well tonight, it's gonna be...and I'd do the whole thing!" he laughs. "And [wife] Michelle grabbed me from behind, and she said 'What they are really saying is hello.'"

Not surprisingly, all three men dug into dinner at SkyCity - especially Steve. And when we're talking food and Steve...you HAVE to talk about his appearances on the 4 p.m. show.

"They could put a dirt clot out there on the 4 o'clock show and Steve will taste it and go 'Oh my gosh it's the best thing I've ever tasted'" Eric laughed.

"If I hear the word interesting I know Steve's ready to ralph," Eric joked.

But back to Dan - who has been busy traveling the world in his three years since retirement.

"I just got back from a two week trip to the south," he said. "Basically St. Louis, Memphis. Nashville. But I visited my brother and his wife who live in Tennessee now that they are retired. And then I went to the Great Smokey Mountain National Park, did a little hiking on the Appalachian Trail. It's beautiful."

While one member of the legendary news team was missing, she was definitely there in spirit: Kathi Goertzen.

"You know you guys I think at the end of my career when I look back I'm going to think that our finest hour was Kathi's night," said Eric. That show we did the night Kathi died, when they put us on a set, turned on the cameras and just said go."

Kathi passed in 2012 after a 14 year battle with brain tumors. She, Steve and Dan anchored the news together for 21 years.

"But you know why it was our finest night?" said Dan. "Because we just had a chance to honor and talk about this person that we loved. To me, I don't know the right word - it was a treat to be able - a privilege to be able to do that and share it with the community. It was an honor. We all loved her so much.

The men still have pictures of of them at events, text messages, you name it .- they kept it.

"I think about her every single day," said Dan. "And you know we have just recently passed her birthday - and it was her 59th birthday and I thought, I would have given her some grief about closing in on the big 6-0! And she would have hated it. Oh god yes she would have had a fit."

"I came aboard and I felt like i was joining the New York Yankees in 1955," he said. "I was just like oh my gosh these guys are awesome. And Kathi was there in that corner seat on the set next to the sports guy, and she scared the hell out of me. I was so nervous because - it's Kathi Goertzen sitting next to me!!!"

One time she even called him out for sweating....it wasn't hot in there, she just made him nervous!

"But I'm sure you found very quickly that she was like the easiest person to work with," said Dan.

"What we did that night [of Kathi's passing] I think of it as one of the most amazing things as a group we've ever done," remembers Steve.

"But you know what we would have done that night if we were not in the TV business and Kathi was our friend?" Dan remarked. "We would have sat around that table and told all those same stories. And that's why I think it was such a great night, because it was just us talking about this woman we loved that we weren't ever going to see again. She was such a special friend. God I counted on her for so much, and she'd have to put me in my place every once in a while.

As the dinner wrapped up, the friends waxed poetic on their time together.

"As we end this gathering I can't tell you guys how much I miss being with you," said Dan. "How much I miss the camaraderie in the newsroom, and how much I am enjoying my retired life."

"This is going to sound weird," said Steve. "But I'm envious of you! Not so much because okay i've had it - we've seen each other a fair amount since you've retired and the sense of purpose and calm and very sure of what you want to do and what you want your life to be like. So many people, when they emerge from especially what we do - they are sort of continually tortured by it in some way."

Dan was a bit surprised how easy it was to let it go.

"I loved my job, I loved the people I worked with to the very last day I enjoyed coming to work. And since I've left I've enjoyed my new life just as much. I look back with fondness on a lot of stuff that happened, but I am just so happy with how things have evolved since I left the business, that I feel blessed. I feel like I am the luckiest man in the world."

And Dan's legacy lives on in the KOMO newsroom.

"You may or may not be happy to know that many many times I say to myself, 'What would Dan Lewis do in this situation?'" said Eric. "I mean you are the blueprint for what I do and I am not just saying that. I think you know that. I like to think we have a mutual respect and all that.

"That's about the nicest thing you could say to me. So thank you very much," said Dan. "I've had a lot f people say to me that they retired and they were bored, they didn't know what to do - they went back to work or kind of got lost in their life. It's been three years so it's really sort of a short period of time, but if I can keep it up the same way. I've told so many people - could i be happier? Maybe. But I am about as content as I've ever been in my entire life."

When we decided to bring these guys together, we wanted to do it someplace special. SkyCity Restaurant at the top of the Space Needle turned out to be the perfect spot. Five hundred feet off the ground, you can't beat the incredible views. And chef Jeff Maxfield's Northwest inspired menu is really second to none. From local seafood like scallops and crab-cakes, to classic American dishes like pork chops and beef tenderloin, we really couldn't pick a better place to catch up and watch the sun go down with old friends.

Thanks to Eric, Steve and Dan for joining us - we had so much fun.