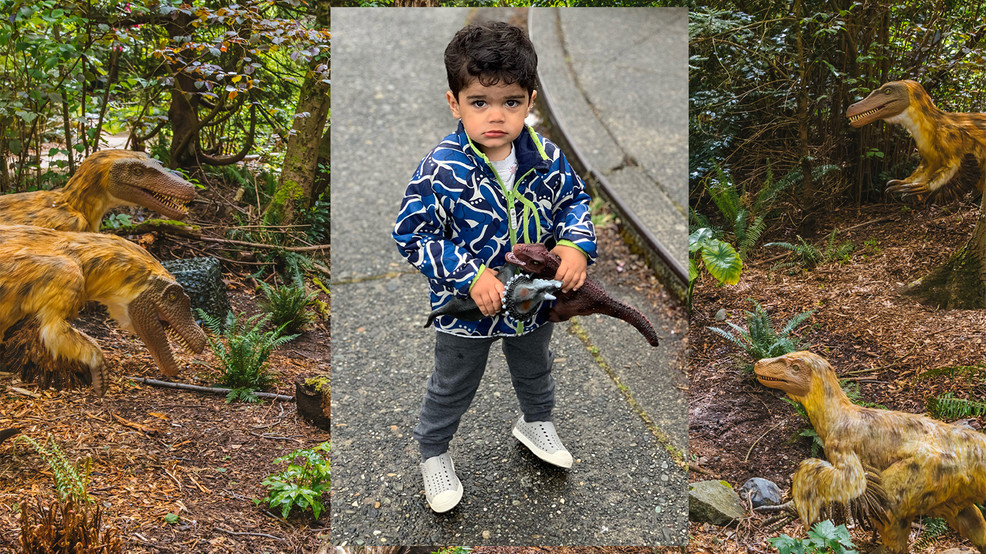 Books, flashcards and dinosaur stuffed animals were scattered all across the living room floor.

Dean, an adorable 2 and a half-year-old, sat with his dad, Ehsan Yousefzadeh, eagerly flipping through the pages of his dinosaur book, only taking breaths to pause and yell out the name of the creature on the page.

After saying each name, Dean's mom, Mia, and Ehsan would enthusiastically repeat it back to him.

"For some reason, it is more natural for him to say these types of words than it is for us," said Mia. "It was sort of alarming to see this little baby say these four, five-syllable words and still not be able to say banana."

This passion has sweetly earned him the title Dean the Dinosaur Man. Not even three years old, and he is essentially a walking dinosaur encyclopedia.

Mia, Ehsan and Dean moved from New York to Seattle in December, and that's when the couple really noticed Dean's knowledge and interest in dinosaurs take off. Ehsan's brother, Shahin, bought Dean a Dinosaur Sound Book before they left New York. The book has 12 dinosaurs in it with corresponding buttons you can press to hear the sound they made. It also came with little figurines.

"He thought it was the coolest thing he'd ever seen. By maybe two days later, he knew every dinosaur's name, and it just stuck," Mia said. "I think New York is so busy that he hadn't had a moment to just sit still and love something. We moved here, and he went from liking dinosaurs to just this crazy encyclopedic knowledge for it."

Mia and Ehsan have fully embraced Dean's interest in dinosaurs, buying him books, flashcards, taking him to museums, showing him documentaries — anything to try and keep up with this little man's growing interest and knowledge.

"He's got a great memory and a lot of curiosity," said Ehsan. "I mean, I was never like this as a kid."

"It's kind of an amazing look into memory. He makes associations, like 'bump on his head, Brachiosaurus.' And then he sees it again and can remember it," Mia said. "It's hard for us to keep up with him."

Dean even knows which dinosaurs are carnivores or herbivores, so his parents are starting to introduce him to the Triassic, Jurassic and Cretaceous Periods.

Passion is often associated with skills like learning to play an instrument or sport, but Mia said a passion can also be something you love and know a lot about. For Dean, it's looking like that passion is for dinosaurs — and his parents love it for him.

"I can't believe we got here," Mia said. "He just likes the size of them. I don't know, I can't figure out what it is, but we are going on like six months now, and it is his true passion in life, so we are going for it. Everyone knows Dean the Dinosaur Man."

And when Dean brings his dinosaurs to the playground, he is happy to share with the other children. But, they have to learn the name first! That's a must.