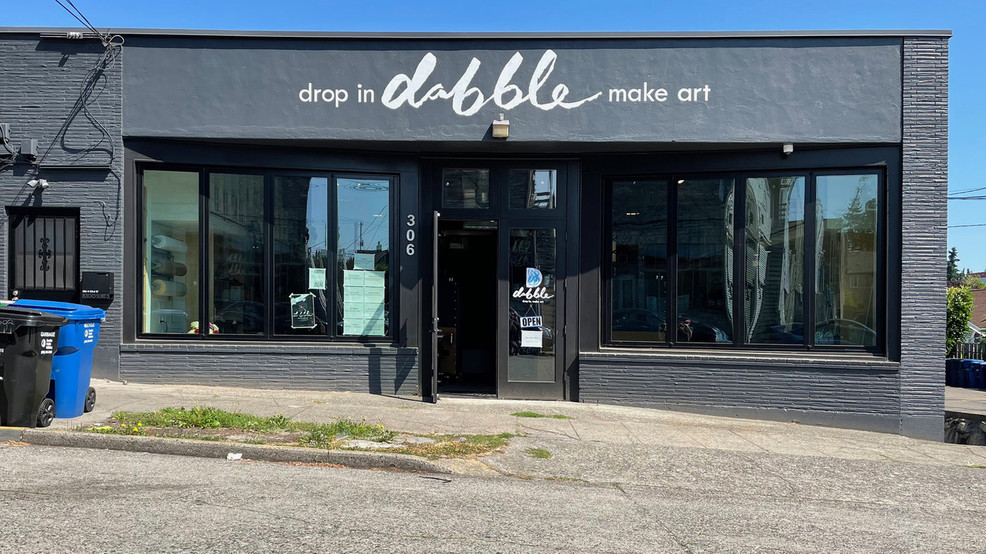 Care to 'Dabble' in painting or crafting? This new share-space is for you

Over the last 18 months, many have taken up a new craft like painting or collage to pass the time. But with space devoted to working from home and children underfoot, where can you make that happen? What if you need supplies or inspiration?

A long-dreamed of business in Greenwood is here for you. Dabble, opened by Dave Wheeler (he calls himself the "owner-janitor"), opened in July. It has 12 workstations, each with a height-adjustable and tiltable desk and independent lighting for each station. There are partitions that can be raised or lowered if someone wants privacy or to create with a small group. There are also two free-standing print presses in the space and separate space for spray painting.

Wheeler, a freelance illustrator whose work has appeared in newspapers and magazines, encourages people to bring existing projects in. But he also has a grab-bag of ideas that people can run with, some still life objects they can borrow, and professional-grade lighting and cameras to photograph finished work. He has some supplies available to borrow, like compasses and rulers and noise-canceling headphones to rent. There are some papers and paints users can purchase from vending machines and repurposed newspaper racks. A few doors down is Seattle Recreative, a shop that sells used art supplies.

He has plans to hold regular live model drawing (not nudes, but people in costumes either provided by themselves or by Dabble). He is actively seeking models for these projects — they will be paid and feature a new medium every month.

"I'd like to hold a Jackson Pollock night where we just stretch canvas on the floor and let everyone start splattering," he said. "The studio is designed for drop-in use, as opposed to reservations."

"I want to lower the barrier to creating," he said. It costs $10 per hour per individual and $20 per hour for two or more people from the same household.

"It's not a nonprofit, but it's no get rich quick scheme either," he said. "I have minimal expectations. I mean, sales tax was a learning experience for me."

Wheeler, who just published a board book called "New House" in February, said the store was a dream for more than 15 years, and he was finally ready to open at the start of 2021 when the winter COVID surge was peaking.

Currently, he is asking people to mask up inside the business, and the dividers can be put up permanently if the county health department recommends it.

"And if we have to close, we will close. This is people's health," Wheeler said. So far, things are going well.

"Greenwood turned out to be a great neighborhood for it, as there is a lot of foot traffic. During the summer, there have been kids coming in," he said. "They seem really happy to lose themselves in the work. Adults can be more uptight. But really, the process is great even if you don't like the results."

Patrons who are unsure of their work don't have to worry about snide comments: there is a firm rule of no comments on others' work unless specifically requested. The fear of not being good enough is one of the things that can hold people back from being creative, said Wheeler.

"It can be therapeutic to make something."

Dabble is open Wednesday to Saturday and can be rented on other days for artists to give classes or for other group events. A monthly calendar is available on the Dabble website.