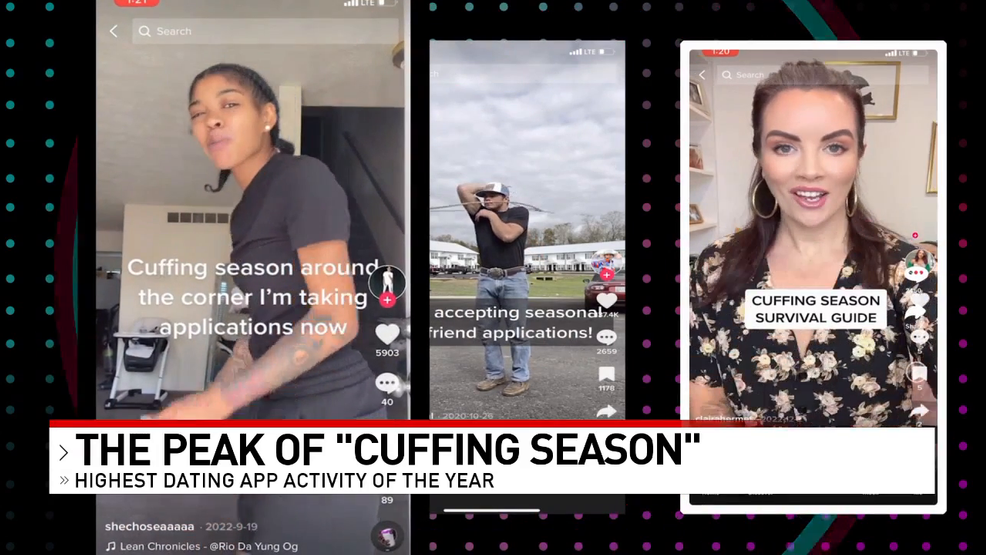 Cuffing Season: What it means for dating app activity

Love is in the air and all over the internet this time of year.

We’ve reached the peak of cuffing season—it's a real phenomenon spanning from October to February.

It's even in the dictionary.

Cuffing season is that period of time in the late fall to winter months where people desire to bond with another individual and maybe form a relationship with them," explained Marisa T. Cohen, a relationship scientist and Marriage and Family Therapist.

When we asked dating app users about the idea, some told us they were leaning in, but some referred to the timeframe as "slow torture."

There have been 1.3 million TikToks made to that song alone, and millions of others made with "applications" submitted by people looking for love.

What does cuffing season mean?

The term's meaning isn't as kinky as you might think, according to Merriam-Webster. Instead, it stems from the idea of being connected or tied to another person.

While the term is new, the concept is not.

Biologically, testosterone levels usually peak in the fall and serotonin drops in winter, creating an instinctual drive to find companionship.

And then there are the environmental factors.

"A lot of that has to do with pressure from maybe family, friends..." Cohen said, citing the awkward conversations with loved ones over the holidays where someone inevitably asks if you're seeing anyone.

Mix it all together and you get an increase of people looking for a partner—temporary or permanent—especially on dating apps.

The first few weeks of the New Year are some of the busiest on these platforms, whether people join for the first time or resume their swiping journey.

A Tinder spokesperson says their peak falls on “Dating Sunday,” which is the first Sunday of every year. Swipe activity rises 35 percent from normal.

A spokesman for the HER app tells us their new user count spikes by 15-20% in January.

We asked several dating app users why they believe this increase happens, and most responded that the culprit is loneliness.

"It's sort of like a fresh start," explained Caitlin Cantor, an individual, couples, and sex therapist.

She says this is the time where more people are looking for human connection.

Dating apps aren't for everyone, so we asked our experts for some tips if you aren't on the market this cuffing season.

"To combat feelings of loneliness, the best thing is to reach out and form connections with others," Cohen said. "Now, that doesn't have to be a romantic relationship...reach back out to friends that you haven't spoken with in a while and start there. You can network meet new work colleagues. Forming those connections, whether romantic or platonic, can really help you."

But if you do want to try dating apps, experts say there's no shame in that.

"I think it's important to think about whether or not there's other work to be done around the loneliness," Cantor said. "You can do those at the same time, you can go on the apps and try to meet someone, and also work on dealing with past issues or things that go along with that."

Whether you're looking for love or flying solo, whether you're on the apps or meeting people the old fashioned, way, experts want you to know, your experience is valid.

We asked you about cuffing season on Facebook and got some mixed reactions.

Some people were in the process of signing up for dating apps, while others like Jessica said, "No thank you, I bite and I have rabies... No cuffing for me ever."