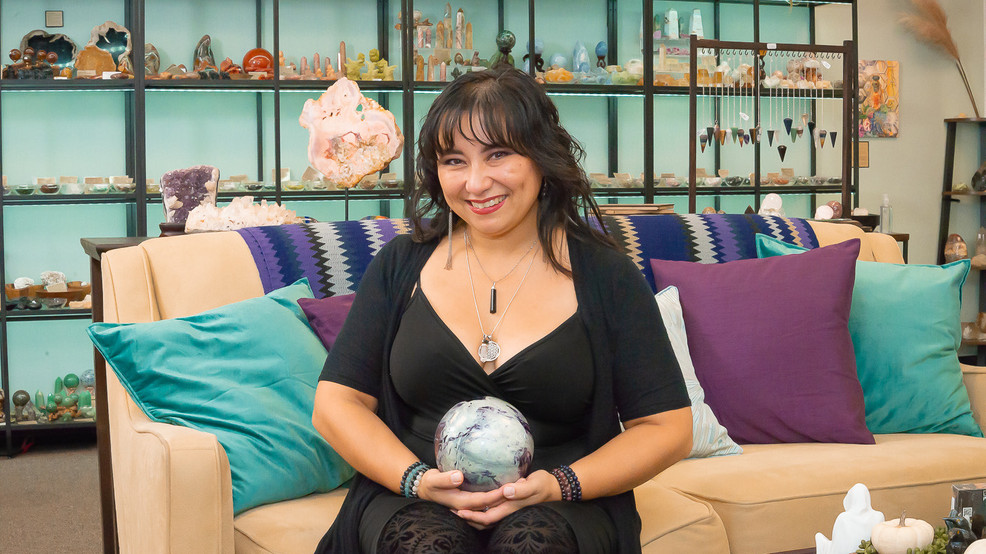 Start your crystal journey at Crystallography Gems in Georgetown

Before you step inside a seemingly unsuspecting building in Georgetown, you must call to get the door code. It's reminiscent of a speakeasy, but instead of finding a place to drink inside, you'll find something a little more magical.

The staff at Crystallography Gems change the code often, and for good reason. What lies upstairs is a sea of chests and shelves filled with color. Here you will find high-quality, high vibration stones and crystals, and a team happy to help you find the perfect one — or better yet, show you that you already have the tools within to do it yourself.

"When I first started with crystals, I thought I was broken," said owner Michelle Ferris. "It felt like a rock in my hand [...] I thought there was something legitimately wrong with me. But I later learned there are all these different ways you can sense things."

Ferris never intended to open a crystal shop when she first discovered her passion for them more than a decade ago. But she doesn't "really drive the bus anymore."

"I feel like really it was the crystals that were the driving force behind all of the things that have happened," she said.

Crystallography Gems grew from selling her own private collection in an attempt to make room for more, to selling at festivals, to throwing her own events, to renting an office space and eventually expanding next door to open a retail space — a pretty organic evolution. And while Ferris never planned to open a shop, she said now she couldn't see it any other way.

"I look around here, and I'm like, 'this is kind of what I have always wanted,' even though I have always been like, no, no brick and mortar," she said. "It's absolutely been a blessing in disguise, and I'm so glad this is how it panned out."

Her team is small but mighty, and Ferris mentioned several times during our interview how thankful she is for the people by her side.

"I'm proud of how diverse we are. I feel like in the whole healing community, particularly in Seattle, but even bigger than that, it is very Eurocentric and very heteronormative. We have all kinds of different people here," she said. "I feel safe here [...], and that is something I have worked really hard to design into all of my previous events is that feeling not just of tolerance but acceptance and safety. It's really nice I can bring that in here."

The world of crystals can be overwhelming, to say the least. I would know because it has been something I have been immersing myself in for about six months now. My TikTok FYP is overflowing with this kind of content, and I know it was hard for me to gauge what was genuine, how to start and how not to get scammed. These issues are something Ferris said are common, and she wants her shop to be a trustworthy resource to help people feel safe to get started.

"You want people who really have a passion for what they are doing," she said. "They are not going to sell you something that is plastic junk [...] cause that feels wrong."

Ferris has many established vendors offering products she knows she can trust. When it comes to new vendors, vetting is critical — whether that be an energy exchange, videos of mines, knowing working conditions or going through a table of product and reading each individual energy.

"All of that stuff leaves energetic imprints, and the last thing I want to invite into here is the energy of exploitation," she said.

While she is obviously looking at the quality of the product, Ferris said she is also seeing which tools want to come with her to be found by someone else.

There is no right or wrong way to pick a crystal, and sometimes, the crystal chooses you. Ferris said she has seen people walk in who are immediately drawn to certain crystals while others want help picking one out.

"There is not a wrong way to feel things," she said. "Most people are taught they need someone else to help them do it, and that takes a lot of power out of self. We would much rather teach someone else to get in tune with themselves."

Being fairly new on my own journey with crystals, I wanted to find a crystal for myself. I walked around the shop with Ferris for a little. I told her a bit about my own journey, my short-term goals and mentioned I have a hard time trusting myself because I often intellectualize my feelings and intuition.

As we walked around, she let me hold different crystals in my hands while explaining to me what their energy represents — but how do crystals affect us, in general?

"Crystals have their own sense of symmetry [...] They know what they are doing. They have their own inner wisdom, right? There is a particular frequency happening with that specific pattern," Ferris said. "Then you take a body that is mostly water, like us, and it's like the tuning fork theory, you bring one fork and put it next to one that isn't ringing, the other one is going to start ringing."

"It's sending these vibrations through the crystal and magnifying it, and when it hits us, we start resonating with that, too," she continued. "It doesn't matter what type of crystal, or whether you believe in it or not, it is slowly affecting you and shifting you, some more quickly than others."

I ended up leaving with purple rose quartz and a jet stone. I, like Ferris, believe crystals can be an amazing tool for becoming more in tune with ourselves. Some people don't, and that's OK. Ferris herself used to be a skeptic.

"When I started with crystals, I was 100 percent logic, science. It is weird to think about my past self because her and I would not hang out," she said, laughing. "Someone had given me a piece of Green Aventurine. They didn't tell me what it was. It was just a green stone [...] They said, 'just put it in your pocket for a month and to see what happens.'"

And so she did. During that month, Ferris bought a new car, got a raise and a promotion. Her friend told her Green Aventurine was also known as the "Gambler's Stone" because it's all about luck, prosperity and abundance.

"They gave me three more stones, and at the end of the third time, I couldn't argue with it," she said. "As someone who wants evidence, if I am given evidence [...] you have just shown me there is a flaw in the way I have been thinking about things."

Ferris described crystals as jewelry Mother Earth has been growing since before humans have been here. I found that sentiment to be particularly beautiful. We must not put too much logic on these magical tools but rather let them exist and trust the process, Ferris said.

"There is no better way to heal community than starting with the self," she said. "Whether that is me or you, or her, whoever it is, we have to start with ourselves. And this is one of the best ways that I have found to really tune in."

Crystallography Gems is located at 650 S Orcas St. Suite #217 and #218, Seattle. Their hours are 10 a.m. to 8 p.m. Tuesday to Sunday. When arriving, call 206-209-9352 to get the door code. You can learn more about Crystallography Gems and find a variety of resources about crystals on their website.