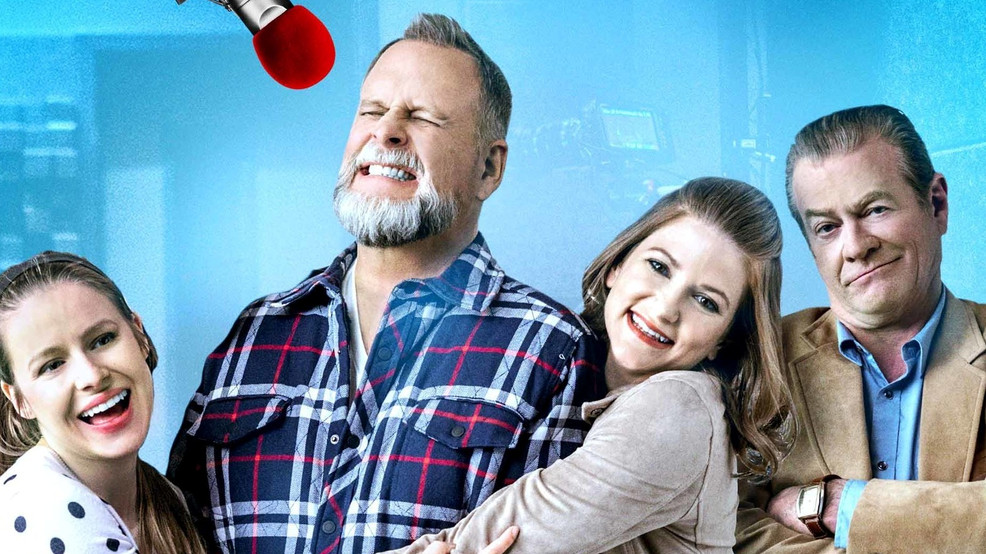 Seattle comedy legend Pat Cashman is returning to radio — sort of. He stars with Dave Coulier in a new streaming sitcom called "Live + Local," centered around K-HUGG, a Christian radio station. Of course, Coulier is known by Full House fans as "Uncle Joey" in the iconic 90s TGIF TV lineup.

The show's creator Dan Merchant says, "Live + Local is a love letter to all the local morning radio shows I've started my day with. There is just something so encouraging about waking up to these eccentric voices so full of personality and life so early in the day. It takes a special person to bring radio to life each day and make each listener feel like a friend.”

Perhaps that is why Merchant wanted Cashman to be part of the show. Longtime Seattleites will recognize Cashman's voice and work from the iconic comedy sketch show Almost Live!, which led Cashman to narrate for Bill Nye the Science Guy.

Merchant and Cashman first crossed paths on Almost Live! in the early 90s.

"He was just out of college and was one of the very early writers for the show," Cashman tells during our recent conversation about the show. "I didn’t really join Almost Live! formally until about halfway through its run, so I didn’t know Dan very well, but got to know him more later."

Cashman made an impression on Merchant who tapped him for a role in an episode of Syfy’s Z Nation a few years ago.

"I know that it’s really stretching to imagine, but I play this pompous news anchor who thinks that he descended from heaven," Cashman says. "He thinks he’s so important. And he’s paired with a young woman, who he clearly resents because he’s fearful of being replaced. So, we’ve sent reporters out in the field where a plane has crashed. Total losses of people. And then, suddenly, all of these people who are dead on the plane suddenly get up and start walking around."

Yes, Pat Cashman was in a zombie show and his character became a zombie, too. For a brief time.

"I’m in the makeup chair for over three hours and then my scene as a zombie is about six seconds long."

I found a clip of the episode online and thought it was hilarious. Cashman tells me that Merchant wrote the part with him in mind.

"I don’t know if I was any good in it," Cashman retorts. But his loyal following would say otherwise.

In fact, when I told friends and family of the upcoming interview, they asked me to tell Cashman how much they love him. He is appreciative, but ever humble. He's also genuine and one heck of a funny guy on- and off-camera.

His new role on Live + Local isn't too far of a stretch for Cashman, who worked at various Seattle stations for about ten years. He loved it. In fact, he continues to do some of his routines with fellow radio co-star, Lisa Foster on his Peculiar Podcast. But that is a story for another day.

"People used to ask me, ‘Did you like Almost Live! the best?' No. For me, radio was it. You adlib your way through everything. You’re not working from a script. It’s a by-the-seat-of-your-pants kind of reaction to the news of the day or a weird phone call that comes in." Cashman continues, "It was engaging and was the kind of radio that I used to love listening to when I was a kid. I kinda got in on the tail end of that type of radio."

Cashman explains to me how he feels that some radio shows focus too much on political issues, while he prefers shows that interact with their audience, like neighbors talking over the fence. Eventually, those simple conversations would lead to some real gems.

"I would throw out a topic like, ‘What’s the worst thing you’ve ever done?’ I would start the conversation about how I accidentally started a forest fire when I was a kid." (Another story for another day!)

Cashman continues, "And then people would call in and would say things like, ‘Well, I hated these neighbors across the street. So, when they were out of town one week, I got into their house and I turned on their water faucets and I left, so when they got home, the place was flooded.’ And I’m thinking, ‘What the hell? You’re just now revealing this?’"

But the subject matter wasn’t always off-the-cuff. Sometimes it was reflecting on the human condition.

"For me, the most memorable broadcast was on 9/11. On my show, I was doing a bit and suddenly a news guy walks in and says, ‘Hey, a plane crashed into the Trade Center’ and the tone of the show changed quickly. It was so dramatic and tearful and weird. I still hear from people who listened to us that day. I didn’t want to go off the air. I would have been there for 24 hours if I could."

Cashman laments the state of radio these days.

"There is so much syndication now, it’s just not a local thing anymore. It kind of spilled over into Almost Live! That show was intentionally local. People loved jokes about their neighborhoods and towns. We created all of these stereotypes that were not generally quite true. It’s never ‘all of this’ or ‘all of that.’ But it made for a lot of fun and humor and people seemed to really connect with it. They love it. There really aren’t parallels to it in the United States where a particular city produces a sketch comedy show about that place.”

Almost Live! was a unique animal. It was praised by critics almost as often as it was crucified. Ratings weren’t good. It didn’t help that it aired early on Sunday evenings. Eventually, the show was moved to a more fitting timeslot, after Saturday Night Live and then appearing before SNL, a move that was unheard of at the time.

"That’s when our ratings went through the roof," Cashman says. "But looking at the early shows, I hang my head. I go, ‘Oh my God, that’s awful.’ Nobody on the show knew how to do it. So we learned. For some reason, it didn’t get canceled. It came close a lot of times. You’d see these headlines in the newspapers saying, ‘Almost Live! Almost Dead?’ But our writers learned how to write really well and the story tells itself."

"It’s quite a pedigree from people who didn’t know what they were doing when they started, but got to do it long enough that they got pretty good at it. A really wonderful story," Cashman shares.

Cashman can’t say enough nice things about Dan Merchant and was pleased when Merchant came a-calling again last year. Merchant said Sony Pictures was interested in his new series and there was a role perfect for Cashman. The show was set at K-HUGG, a Christian radio station located somewhere in the midwest.

"I’m not a particularly religious person myself, so I guess I didn’t realize to the extent that this was a faith-based show," Cashman says. "But I don’t do anything in those six episodes that has any faith aspect to it. I’m just playing a program director who has worked at other stations and this is just another gig for me and I liked that about it. I fully support the purpose of the show. That’s it’s a family-friendly show and all of that stuff. That’s kind of what I was always about, especially on radio."

Live + Local stars Dave Coulier as Tommy Murphy, a big fish in a small pond of radio shows. Pat tells me how impressed he was working with Coulier when the cast met for the first time. It was just one week after Bob Saget - Coulier’s Full House co-star and good friend – had passed away.

"We sat in a room together in a hotel and I expressed my sorrow for him and he spoke about Saget for probably half an hour. It was really good. He was so thoughtful about him and told lots of stories about how they met."

"She was in a TV show that I think was one of the funniest things I’ve ever seen called Veep. She’s wonderful in it. She was supposed to be on just one episode but wound up being in seven or eight of them. She’s really outstanding. You should look at that," he tells me.

Cashman plays Jerry Greavey, a program director new to the station. It is a role that draws from personal experience for him, because as he tells me, when a new program director shows up, you know that you’re probably going to get the guillotine because that’s what they have to do. They are there to make changes.

"It was wonderfully delicious for me. To be every kind of program director – a good program director, a jackass program director all of that stuff," said Cashman, explaining that while Tommy is trying to put a good face on it, he’s actually afraid of losing his job. Which makes sense.

"As an on-air personality, you’re on your heels from the start. You’re not sure what the program director’s agenda is," Cashman says. "You get diffident and scared but you don’t want to admit it. So that’s the dynamic that’s taking place here."

"He rather fancies what Tina is bringing to the party. Jerry likes her a lot and thinks that she could be a big radio star. That also makes Tommy very, very insecure. He’s afraid that he’s going to be fired and she is going to become the star of the show."

And then there is Lucy Smith, the intern played by another familiar name, Kendra Ann Sherrill. She is the Director of the Children's Film Festival in Seattle and, according to Cashman is "just a sweetheart."

"Kendra plays the intern that answers the phone and takes phone calls and goes and gets coffee for people and all that sort of stuff. She’s unsure of herself at first, but you see her confidence growing as the show moves forward. So a lot of it really rings true of egos. I’ve never met anybody in any profession that is more full of themselves than people in radio."

For Cashman, working on Live + Local was a great experience and he was sad when the show wrapped. With help from fans, he hopes the series gets the green light for a second season.

Jeff Totey is a freelance writer for Seattle Refined. Follow more of his work here.