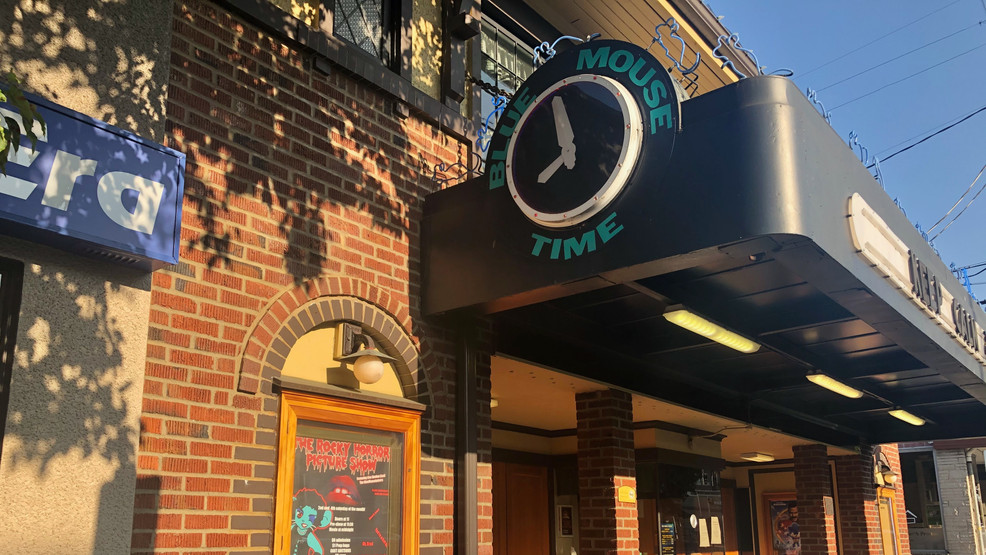 When can we do The Time Warp again? Tacoma theater's loyal fanbase wants to know

Just six months ago, dozens dressed in fishnets, sequins and exaggerated make-up routinely lined the sidewalk in front of Tacoma's Blue Mouse Theater for the 1975 cult classic, "The Rocky Horror Picture Show." Months later, the theater once filled with costumed strangers, close friends and the buttery smell of popcorn is nearly vacant. The last Rocky performance was Feb. 22. The next was scheduled for March 14, but among the increasing rates of COVID-19 in the Pacific Northwest, as well as across the country, the cast decided to cancel.

Now they stand in the wings, anxiously waiting to do The Time Warp again.

"It's been a difficult few months, after 25 years of working now I'm home every day," said theater manager Sue Evans. "I miss the people and the Rocky kids."

The Blue Mouse is a longtime Tacoma staple and nationally recognized historic place. At 97 years old, it is the oldest continually operating theater in Washington. The theater has been called a few different names throughout its near-century of life on on Proctor St., such as the "Proctor Theater" in 1932 and "Bijou" in 1980 before returning to its original namesake in 1993.

"The theater wasn't doing too well [back then]" she admitted. Big movie theater chains were hurting smaller local theaters. In 2001, another local Tacoma theater, the Lincoln Plaza Cinema on 38th, had gone out of business, leading its Rocky Horror cast looking for a new home. When they contacted Evans, she was unsure whether or not to take them in.

"None of the other theaters in Tacoma wanted to do it," she said. "I had never even heard of the Rocky Horror Picture show."

Nonetheless, the Blue Mouse turned into the local Rocky house. When Rocky opened that Halloween, they had a sold-out show. The addition of Rocky pulled the struggling theater out the red. Soon after, the Blue Mouse cast of Rocky (also known as the Blue Mouseketeers) hooked a loyal fanbase. It wasn't long until the Rocky cast became a significant part of Evans' life.

The show is an entirely immersive experience — fully costumed actors lip-sync every line in time with the film, and the crowd gets in on the action too. In most movie screenings, it's a general rule to keep to yourself and refrain from talking during the film. At Rocky, shouting is encouraged. In unison, the crowd fills in the blanks of the film's dialogue, usually with a double entendre. Also, audience members buy prop bags on their way infilled with rice to throw during the wedding scene and a piece of (unbuttered) toast to toss when Dr. Frank-N-Furter cheers his glass. It's chaotic but in the best way possible.

Since closing in mid-March, Evans and the rest of the staff have been making most of the unexpected off-time.

"After we shut down, we decided this was a good time to get some projects done," said Evans. "We painted the auditorium, painted concessions, I steam cleaned all the seats in the theater. We freshened everything up."

When Pierce County eventually goes into Phase 3 of Washington's reopening plan, the theater will play movies with limited capacity. In the auditorium, three seats will separate each moviegoer, as well as every other row being blocked out. With these restrictions, a mere 50 tickets will be sold in a 219 seated theater. To counteract the reduced ticket sales, the Blue Mouse might add extra film screenings to their schedule. While this will help, Evans said that 50 tickets "could be an average for a weeknight, honestly."

"It's the weekend that will hurt," she said.

Whereas the theater will be able to do regular film showings when Phase 3 hits, "The Rocky Horror Picture Show" won't go on until at least Phase 4.

"Once we get open, we won't be able to do Rocky unless we just want 50 people there," said Evans. "That doesn't work. If you've been to Rocky, you know it's all about audience participation."

As for the Rocky cast, they have been practicing weekly at the Blue Mouse following safety protocols, like distancing and masks. Cast Director and Janet Weiss actress Jazmine Herrington said the cast is eager to get back to performing and is excited for future shows, where they plan to incorporate local musicians and burlesque artists into the pre-shows.

Rocky is the cast's release, said Herrington. She loves seeing her cast go on stage and be comfortable in their skin, especially in scenes like "Sweet Transvestite," where Dr. Frank-N-Furter struts through the aisles of the theater.

Though it has been months since Rocky Mama Evans has seen the cast on stage, she knows the community will support them when they can open their doors again.