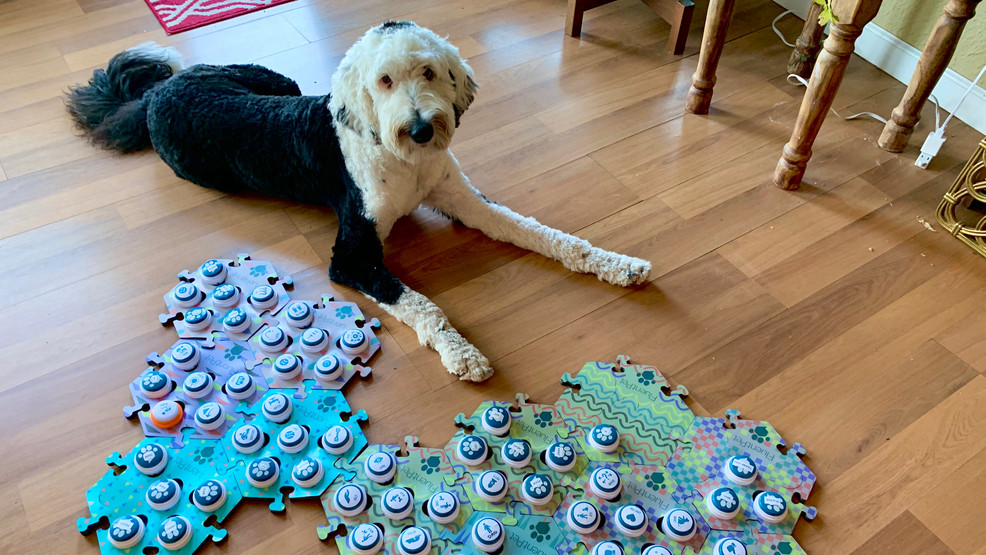 Meet Bunny, the talking dog in Tacoma who's captured the world's attention

Alexis Devine of Tacoma no longer has to wonder what her Sheepadoodle, Bunny, is thinking. Bunny just tells her herself.

From the day she brought Bunny home in September of 2019, Devine was determined to cement their bond and immediately began working on basic obedience and connection. She started following dog trainers on Instagram, joined Facebook groups, binge-watched YouTube videos, and read books on dog behavior to learn and put the motions into practice.

"I really wanted to understand dog behavior and communication," she said.

Inspired by Hunger for Words, Devine decided to teach Bunny to talk using a pegboard with buttons that sounded a word when pressed.

After a few weeks, Bunny caught on and began to use it herself when she wanted to go outside.

When she became comfortable with "outside," Devine layered combinations of words linearly like "outside" and "now."

As soon as she was consistently using the outside button, Devine added a few more buttons, including "play," "come," and "love you."

"Once she got used to the first few buttons, her rate of learning increased," said Devine. "She learned that she could get what she needed by using the buttons."

An artist by trade, Devine credits her creativity and perfectionist tendencies to her and Bunny's strong connection.

"I had to figure out her routine for figuring out the buttons," said Devine. "Dedicated training sessions weren't effective for us. They didn't seem fun for her, and therefore they weren't fun for me."

Devine began to wait for Bunny to initiate engagement and noticed more enthusiasm from Bunny in her learning.

Devine is dedicated to teamwork and positive reinforcement to teach Bunny any new skill, whether it's pressing buttons to communicate or basic commands like sit.

"I spend a lot of time learning her communicative signals and giving her agency," said Devine. "We're a team, and I respect her boundaries. If she is exhibiting signs of stress, then we back off and try a different approach."

Advocating for Bunny has been the most important foundation for their bond, according to Devine.

"We methodically push boundaries slowly to increase her comfort in uncomfortable situations," she said. "She respects and trusts me for that."

Now, Bunny performs immediate exploration with the addition of any new buttons. Sometimes Bunny will press buttons that don't make sense, like "hippo" or "piggy," her favorite toys, but when Devine presents them to her, she has no interest. In those cases, Devine troubleshoots with Bunny to try to figure out what she means.

Initially, Devine organized the buttons in rows across a pegboard. However, after observation, she noticed Bunny was struggling. Devine would try to reorganize the 30 buttons she had already learned in a way that would make sense to Bunny, but Bunny kept communicating, "want where mad all done."

After talking with experts, Devine switched to hex tiles that contained clusters of related words. For example, one tile is the "people" board; another is the "outside" board.

Now that they're grouped into categories, Bunny can communicate more effectively.

Spending dedicated time with Bunny has opened Devine's eyes to her own scientific observations. Recently, Bunny has begun referring to events from the past, a cognitive skill that experts have stated is not possible for dogs. However, there is more and more evidence proving otherwise.

A recent example transpired after they went for a morning walk along the beach and encountered several Great Blue Herons. Bunny became very excited by them and had a very emotional reaction to the birds. Later that afternoon, for two straight hours, Bunny pressed the "bird" button. Devine couldn’t figure out what she was trying to say and then remembered the bird encounter from that morning.

She pulled up a video of Great Blue Herons on her phone, showed it to Bunny, and that was the end of Bunny's demand for birds.

Devine has set up three cameras in her home to record Bunny's interactions with the board at all times. Every two weeks, for the past six months, she has shared the data with scientists and researchers from the Comparative Cognition Lab at UCSD.

Devine says she's not too concerned with what the scientists prove or disprove. She's mostly just fascinated by the relationship she and Bunny have formed. While Bunny has certainly learned from her human, Devine insists that her dog has taught her so much more.

"Paying attention to her subtle body language has taught me volumes," said Devine. "She's taught me about being clear and concise and patient. She's taught me to be kind to myself, to be present in the moment, and to have compassion."

Devine believes that any dog owner can teach their dog to talk the same way that she's taught Bunny, but it requires dedication, the relationship, and temperament of the dog.

To dog owners interested in teaching their dogs any skill, she believes that the key to an effective exchange in communications requires partnership. She emphasizes that for our dogs to listen to us, we first have to listen to them.

"None of this is about teaching dogs to talk," she said. "They've been talking to us all along, and we just haven't been listening to what they have to say."

You can learn more about Bunny on her official website, 'What About Bunny'. Alexis also shares amazing Bunny videos on Instagram and YouTube. Are for super fans - you can find official Bunny merchandise here. Many items are handmade by Alexis Devine.