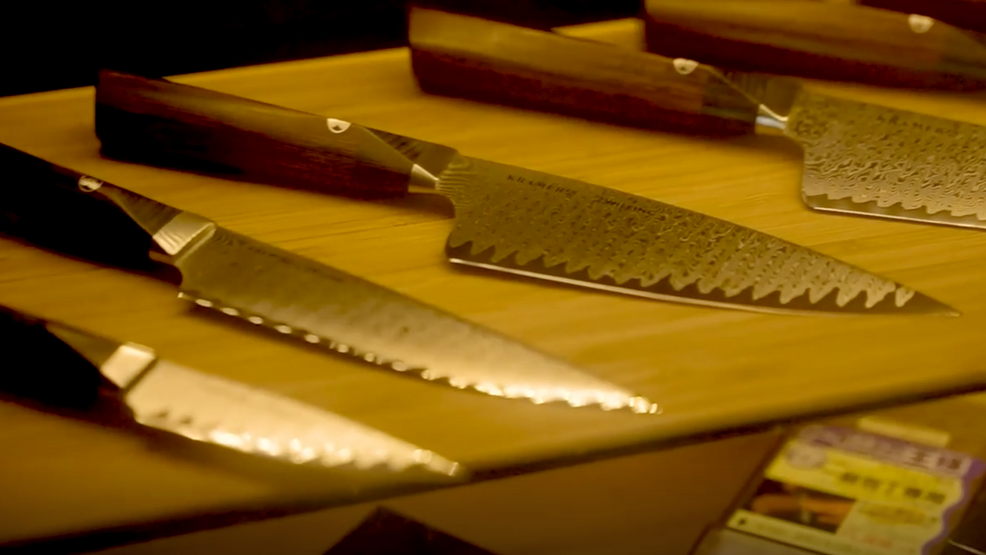 In a nondescript building in Bellingham, layers of red-hot steel are forged into razor-sharp works of highly functional art.

Kramer Knives is one of the preeminent makers of chef's knives in the world. Its blades favored by home cooks, collectors and culinary luminaries like the late chef and author Anthony Bourdain.

Despite its stature, the team at Kramer Knives is made up of just three people: founder Bob Kramer, Jessica Peterson and shop manager Tom Ferry.

"This is the premiere. This is the top tier level of chef's knives in particular," said Ferry.

Kramer Knives licenses designs to Zwilling and makes a collection for Shokunin, but the majority of the blades produced inside its shop are one-of-a-kind and take months, even years, to complete. They aren't sold on the open market. Instead, they are sold via online auction.

"As far as our creativity can take us and our technical abilities, we can make that and sell that," said Kramer. "All I have to do is make a piece and set it free."

A former professional cook, Kramer is one of about 130 Master Bladesmiths in the world. To earn the title takes, at a bare minimum, five years and involves both tests of practical blade-making ability and flawless craftsmanship. But, what really sets this small shop apart, the reason they can push the limits of creativity, is that Bob Kramer is not the only Master Bladesmith at Kramer Knives. So, too, is Tom Ferry.

"[Ferry] is just an artist, and he brings a lot of that art into these pieces," said Peterson.

"I think with my introduction into the shop, we have taken it a little further into the art, the artsy area," said Ferry. "It's a cool combination of [Kramer] being high performance and me bringing this artistic aspect into it."

Before coming to Kramer Knives, Ferry spent two decades running his own knife-making business. He began collaborating with Kramer some eight years ago. Their first project proved so successful they just kept going. Then, Kramer approached Ferry about moving to Bellingham so they could work together full-time.

"I jumped on it immediately. There was no hesitation. My intuition, my gut, everything at the time was telling me it was the right move, and this was what needed to happen to put me back in a good place," said Ferry of his decision to join Kramer Knives.

Though unquestionably at the top of his field, when Ferry arrived in Bellingham, he was struggling, struggling with finding his own self-worth.

"I come from a family that is very outdoorsy, very much into hunting, fishing, all that stuff," said Ferry. "Looking back, it's interesting because there were two reasons I became a knife maker. One was to get approval and acceptance from family. Not necessarily the best way to approach that."

"Previous to coming to Kramer Knives, I had seen three or four counselors off-and-on for three or four years. I had struggled with depression [...] The one thing I've realized is generational trauma is real. Generational trauma is handed down. What it brought forth for me was carrying this bag of shame and guilt that I didn't fit in the box. That I didn't fit in with people, even though I did."

In 2019, Kramer suggested Ferry take a series of classes through a local non-profit called Excellence Northwest.

"It just allows you to take inventory and examine whatever stories you've been telling yourself. (Ferry) took the classes and did incredibly well. I saw that as a real turning point in Tom giving himself license to make whatever his heart desires," said Kramer. "He just uncorked the genie and gave himself the latitude to make whatever he wanted, and that's a very powerful thing."

Ferry and his wife, Jackie, live in the tiny town of Custer, near the Canadian border. Their farm is like something out of a fairytale.

Ferry did create a unicorn, a massive one that he named Morgan. He made it using 500 feet of steel wire sand and more than 2,200 pounds of rocks. It's one of several sculptures he built throughout the farm.

"Everyone who comes here says that there's just a little bit of magic everywhere you go. It just brings awe and wonder to a lot of people," said Jackie.

Ferry and Jackie took those leadership classes together. They culminated with a final project. The goal: find something in your life and go all in. For Jackie, it was canning. (Which became a burgeoning farmers market business, Farmette Fresh.) For Ferry, something he hadn't done since high school — painting.

"In late 2019, I decided to dive into my childhood. In diving into that, I realized all the creativity that I had locked away, that I was too embarrassed to show, that I didn't have enough courage to bring to the world. So, I think it's two-fold in that, in some ways, I'm finding myself, and in some ways, I'm creating myself," said Ferry as we talked inside his studio.

In creating, Ferry has found healing and, with it, a renewed sense of belief in himself.

"I think Tom is an artist at heart. I think he has always been that. I think he is super creative and always had been," said Kramer. "I think for a while it may have gotten stuffed, but I think the genie was let out of the bottle and now it's just completely unleashed."