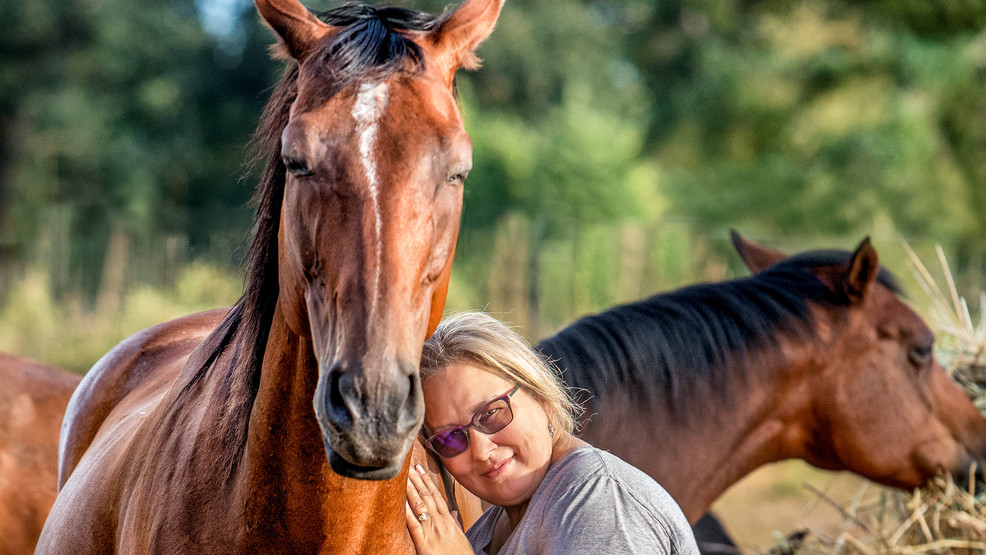 "I remember watching a PBS special about a couple that had started a farm sanctuary in Brewster, NY," she said. "They brought in foster kids to connect with the animals, and I knew that I wanted to do the same thing."

Kelly and her husband Tom started with two horses, Sterling and Trooper. Both horses were destined for the meat trade, a common practice for unwanted horses in the United States. Some 200,000 horses are auctioned off to 'kill buyers' annually in the U.S. and shipped off to Canada, Mexico, and Asia for their meat.

Trooper, an ex-racehorse, was just coming off a second career as a Mexican Tripping Horse, the horrid sport of tripping running horses purely for entertainment. He was damaged both psychologically and physically.

The horses were just six and eight years old when the Laphamas brought them to their farm. Almost immediately after bringing Sterling and Trooper home, the couple also took in two Nubian goats from a farm shut down by the USDA for overbreeding and rampant disease. Bonnie and Clyde would die if they couldn't find a home.

"My husband went into the grocery store when I got a call from the rescue asking if I wanted to take two baby goats," said Kelly. "By the time he got back to the car, I told him that we're getting two goats."

From there, they became known as the people who rescue animals - and began to receive calls about animals in need of a good home.

Black Dawg Farm & Sanctuary received accreditation in June through the Global Federation of Animal Sanctuaries, one of five in Washington state to receive the honor.

The original property was located in Carnation, but they landed on their current space in Rainier when they outgrew county animal restrictions and space. Located on 10 acres near Olympia, they are one of the few animal rescues in Thurston County, a region with a high animal neglect rate and abuse rate.

Black Dawg is named for a pit bull mix who came into the Laphams' lives. As a black dog and a pit bull mix, Sweetie had two strikes against her when it came to adopting her to a good home, and she quickly earned her way into the hearts of the couple. Sweetie became the namesake and mascot when the sanctuary pursued non-profit status two years after adopting those first few animals.

Perhaps just as rewarding as rescuing and rehabilitating animals is witnessing the connection between humans and animals.

Black Dawg hosts over 50 active volunteers, many of whom come from nearby Joint-Base Lewis McCord. Soldiers and retired veterans suffering from PTSD find peace and healing from working with the animals.

The majority of the volunteers are from JBLM.

"We have many people who need something that are struggling and want to feel productive and connect with animals," said Lapham." People come here with the thought of volunteering, and end up becoming healed after working with the animals. It's amazing to watch the interaction between humans and animals. Teenagers going through a hard time find their solace in working with the animals. The animals will listen, not judge."

During each two-hour shift, volunteers work to care for and clean up after the animals. For the remaining last half hour, volunteers are required to simply play with the animals.

Soon, the Sanctuary will be launching into the second phase of its non-profit status, with a goal of becoming a community resource. The Lapham's personal goal is to leave the property behind to the county as an educational center where people can learn about animals and the environment in perpetuity.

Within the next five years, the couple hopes to have a therapist on-site that will be able to help facilitate the bond between animals and people. They are also working on creating some educational plans to teach children and adults about animal care and have a horticulture program as well.

Under usual circumstances, Black Dawg holds a number of events; however, coronavirus has paused most gatherings for the time being. However, the Sanctuary has continued hosting very small events, such as the upcoming Music & Healing, featuring musicians playing music and reiki practitioners for the animals. The event will terminate with a pumpkin smash where the animals get to feast on the pumpkin guts.

Visitors are welcome to schedule a tour to meet the animals and view the farm. The farm follows COVID-19 mandates, restricting group size to 10 people and following social distancing practices.