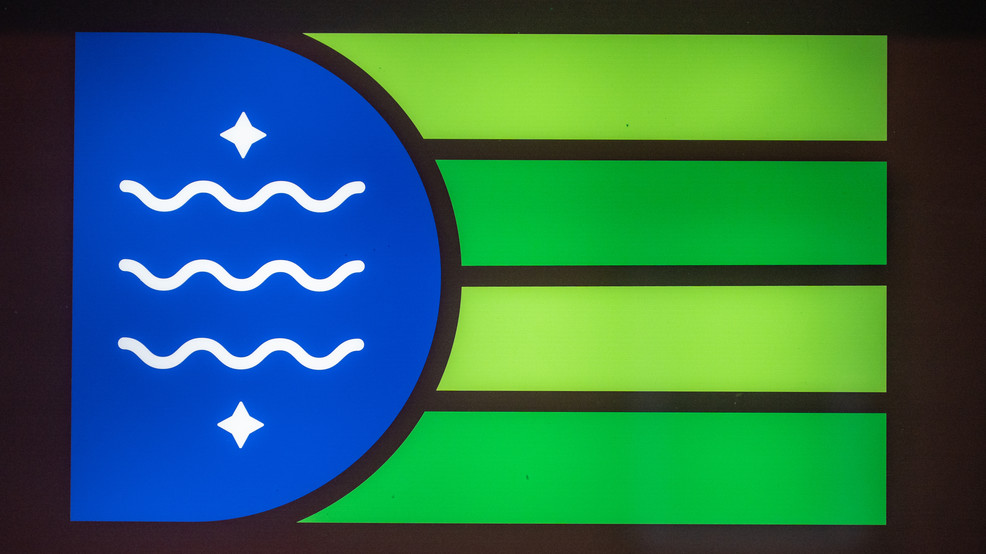 Let it fly: The story behind Bellingham's symbolic city flag

A flag may represent an idea or an ideal. Historically, flags represent a wide swath of culture, history, and symbolism. Over 150 US cities fly a city flag representing their community and local pride. Even Seattle has a flag -- did you know that? And nope, it’s not the Seahawk 12th Man one. The current Seattle flag was designed for use during the 1990 Goodwill games held in the Emerald City that year.

If the criteria to have a flag is pride and a sense of community then Bellingham owns this right with abundance. And as it happens, in 2017, a Bellingham flag was born.

If you visit Bellingham, almost everywhere you go, shop, or eat, you will see the green and blue flag flown. It is even painted on the sides of buildings and incorporated into murals of the city’s history. The city pride is contagious and publicly displayed with honor.

The flag, designed by Bradley Lockhart as an entry in the Downtown Bellingham Partnership contest, is primarily three colors; green, blue and white. The prominent blue half-circle represents Bellingham Bay with the two stars on either side signifying the cultural importance, as well as the influence of the Nooksack Indian Tribe and the Lummi Nation.

The three wavy white lines represent Whatcom falls or the literal translation meaning “noisy waters.” When flown vertically, the waters resemble the falls. When horizontal, the waters look more like waves on the Bay. And lastly, the four green stripes, in alternating shades, give a nod to the original four towns that joined to form Bellingham today: Whatcom, Seahome, Fairhaven, and Bellingham.

This richly symbolic flag certainly hits a chord with locals. Not only is it seen prominently displayed in businesses, painted on walls, and flown at the airport, but as Lockhart jokes, "even Macklemore danced with it during a concert." Lockhart even offers a Pride version designed in the colors of the rainbow.

Officially adopted by the Bellingham City Council in April 2017, Lockhart’s design could be seen flown around the city for more than a year prior to this official installation date. His original design is what is seen today. And it is seen flying from masts of boats, as bumper stickers, patches, even as tattoos.

"The flag shows civic pride and states it simply," says Lockhart. "I am so proud with where I live."

Lockhart grew up in the area, playing along the Nooksack River as a kid. His upbringing would play a role in the flag's design, keeping the symbolism simple and clean, boiling it down to the very essence of his fair city. And his talent for graphic design struck a chord with locals.

"I feel it is invaluable," explains Lockhart. "Flags mean a lot of things to a lot of different people. Primarily, this is who we are and what we are about. Flags should reflect that identity.”

Flags are a unifying symbol -- a city brand to rally behind, bringing cohesiveness to a community and this Bellingham banner hits the mark.

The world may feel unstable at times, but in Lockhart’s view, "People like to invest locally when the big world falls apart. They ask themselves, what part can I play? This flag is a tiny part of that."

The flag design is now in the public domain and that is where Lockhart likes it, "It should be something everyone will own. I think that is really cool."

So what's next for Lockhart?

He has some design ideas to pitch for a new Washington state flag and he recently designed a Washington-themed board game. Only, the board is a cloth bandana. The game's structure is reminiscent of the childhood favorite Chutes and Ladders, only with iconic images pertaining to our Evergreen state. As you move the pieces around the cloth board, you may encounter a Sasquatch, climb Mount Rainer, meet a Troll, pass the Palouse Falls, ride a state ferry, or hike in the Hoh Rain Forest.

And the idea behind the bandana as a game board? It is portable, of course! The entire game packs into a cloth pouch, making it versatile enough to bring along on a Pacific Northwest camping trip, hike, or dinner party by the beach. And as a bonus, the bandana makes for a stylish and creative head covering, too.

What could get more Washington than that?

Lockhart can be found behind his desk at Lariat Creative, or connect with him on social media to see what his next great project will be.

MaryRose Denton is a freelance writer for Seattle Refined. See more of her work here.

While the products, services, and/or accommodations in this story were provided without charge, the opinions within are those of the author and the Seattle refined editorial board.