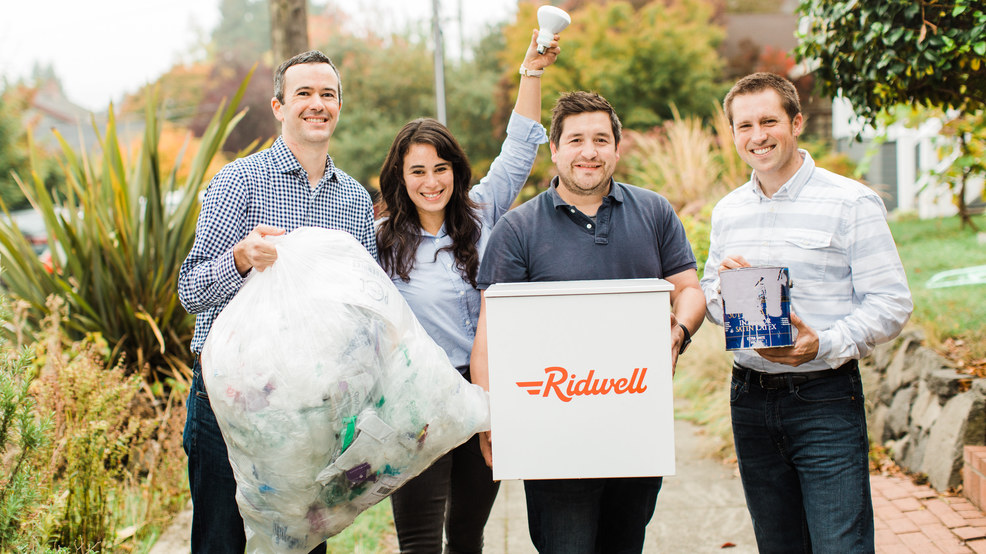 The founders of Ridwell with some of the stuff they take. Left to right; Ryan Metzger, Aliya Marder, Justin Gough, and David Dawson. (Image: Marissa Ciccarelli)
SEE MORE

You may have noticed, but it seems like everyone is starting their spring cleaning early.

Could be the start of the new year, or being stuck with cabin fever with the recent snowpocalypse/snowmageddon. Or most likely, people are going full KonMari after watching the Marie Kondo show on Netflix (and stalking their thrift shops waiting for dope stuff their neighbors got rid of to drop).

Well, if you’re in the cleaning up and streamlining your life bent whilst determining what brings you joy, here’s a service that might be right up your alley. Get to know Ridwell.

Chances are, because you’re reading this, you live in the Seattle area. Which means you care a bit about the environment and diligently separate your recyclables, compostables, and trashables (not a word, but humor me). According to this piece from KUOW, much of Seattle falls into the camp of ‘wishful recyclers’. That is, folks that think more stuff is recyclable when it’s actually trash, often comprising almost 10% of items in recycling centers.

What can we do about things that are filling up our home that could have a second life, but we’re unsure or don’t have the time to address them? That’s where Ridwell comes in (full disclosure, I’ve been using the service for a few months). According to cofounder Ryan Metzger, "Ridwell makes it easy to get rid of things the right way."

I heard about Ridwell last summer as I was a part of Owen’s List. Owen’s List started when Metzger and his son Owen worked with a small group of people to take their random household goods that typically went to the trash and landfills onto the next stop of their reuse journey.

"Owen’s List taught us how many opportunities there were to go beyond the normal bins to reduce a family’s contribution to our waste stream," said Metzger. "We also learned that so many people care about that – in less than a year, Owen’s List grew to over 4,000 people as we helped many of our neighbors divert over 20 categories from our landfills!"

From there, the business idea of Ridwell was born.

With growing neighborhood interest and discovering new and creative ways to take what may have been headed to the landfills sparked the idea to launch from Owen’s List to the Ridwell startup.

"The a-ha moment(s) were when we saw how much interest in what we were doing with Owen’s List," said Metzger. "Even outside of pickups, people would recognize us around town and would ask us when the next pickup was for some of our most popular categories. We started to think of the many other people like that and decided that there was an opportunity to create something to serve this need."

With that info and vigor to do more, Ridwell was born last fall. The service is expanding their reach in the area with plans to be available Seattle-wide by the end of March. The cost is between $10-14 a month for a biweekly pickup of four standard categories; plastic film, threads, lightbulbs, and batteries. Within each pickup is a fifth category that rotates. Over the past few months of using Ridwell, I recall the rotating categories including jewelry, electronics, leftover Halloween candy, and holiday lights as examples. And Ridwell also has a monthly pickup for styrofoam.

I want to spend a bit talking about plastic film. After being a part of Ridwell, I’ve noticed that it’s everywhere. EVERYWHERE. And it doesn't recycle in the way that we think it is (there it is; wishful recycler strikes again).

"One surprising thing we’ve learned is how common plastic film is in our society," said Metzger. "Not everyone knows what this is, but it’s thin plastic like plastic bags, Ziplocs, air pillows, bubble wrap, plastic wrap, etc. This stuff is one of the highest volume plastics but does not fit very well into traditional recycling given its shape and how flexible it is. There is, though, a way to recycle it if people take the time to drop it off at local partners (or use Ridwell)."

Plastic film accumulates like weeds. Think about how much you come across; grocery bags, produce bags, the plastic packaging that wraps around paper towels; it is literally and figuratively everywhere. And thanks to Ridwell, it can be dealt with properly. For our household, Ridwell has been welcomed and has made us more mindful; we appreciate all the stuff they take.

So there you have it. Make the jump from wishful recycler to a more thoughtful conservationist and take a step back to holistically look at how you separate your trash and recyclables. Consider how to be a better recycler at home. Reduce your landfill footprint, Ridwell can help you do that.