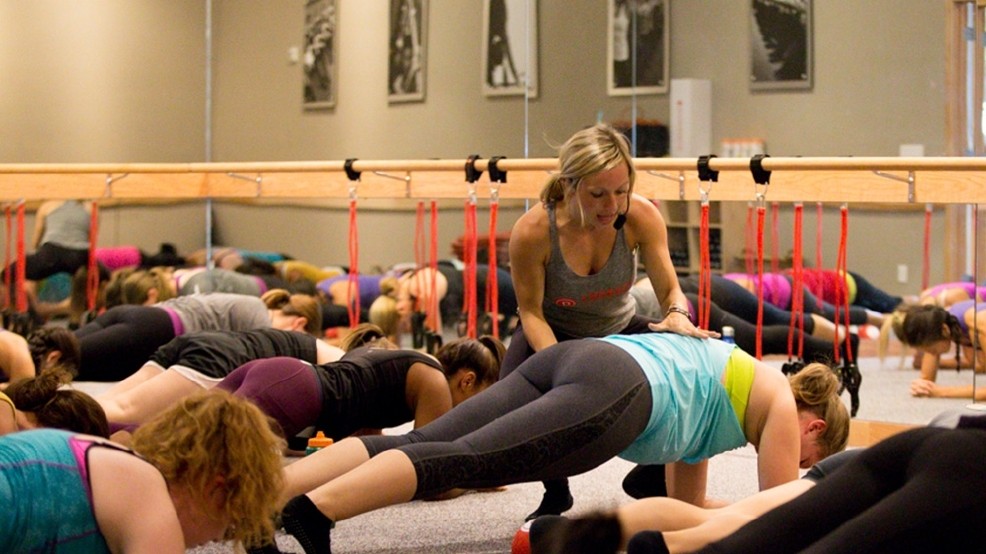 Barre is a fusion of ballet conditioning, palates and weight work. At local studios called Pure Barre, in the 55 minutes of the intense session members target every area of the body. (Image: Joshua Lewis)
SEE MORE

Many little girls dream of being a ballerina, but as grown women it's not often they are given the chance to stand in front of floor to ceiling mirrors, with motivational music blasting, and have ballet incorporated in to their workout.

Barre is a new form of fitness that is sculpting bodies all over the nation. Whether you're a bride-to-be or mom-to-be, danced ballet since you were little or haven't seen a gym since PE class - you'll find a thriving fitness community.

Barre is a fusion of ballet conditioning, pilates and weight work. At local studios called Pure Barre, members target every area of the body in a 55 minute intense session. Although it's not high impact, you are sure to break a sweat in your first class. Strengthening and toning, instructors focus on muscle groups, exhaust each, then stretch to promote lengthening.

Pure Barre has a brand new location in Greenlake, fittingly nuzzled in next to the new PCC in Greenlake Village, adding a fresh workout to an already health-conscious community.

"My goal is to get a consistent experience; if you have a membership one place, the next will have same service, amenities and teachers who are capable- across board," said Sweeney.

Pure Barre isn't the only fitness trend popping up in the NW - you can't go very far without seeing a Hot Yoga studio or Crossfit. But Sweeney argues Barre isn't a similar fad. It may be effective and fun like the others, but she puts the biggest emphasis on the main difference - safety.

"It's extremely safe! The environment is controlled, working different muscles group and we have never had an injury," she said. "You won't leave a barre class thinking you pulled something."

"I have had surgeries and injuries; and was told not to do anything high impact," said Su. "Speaking from experience, it's a great workout for someone who has had injuries. The instructors help you individually."

Su also added she genuinely misses Pure Barre when she skips out on a class. Although members leave with a toned body and sculpted backside, (results that can be seen after 10 classes, they claim), members say it's more than a physical difference.

"People become more confident, not just from their body changes," said Sweeney. "The community, support of teachers and friendships built - it is a small studio experience and they become a part of something."

Pure Barre promises the experience and all the equipment; members only have to bring to class socks, a water bottle and willingness to have their confidence and workout routine rocked. Pure Barre Greenlake is offering a new client special of five weeks of unlimited classes for $99. A single class costs $23, but more savings can be had with their 5-class, 10-class and 1-month packages.