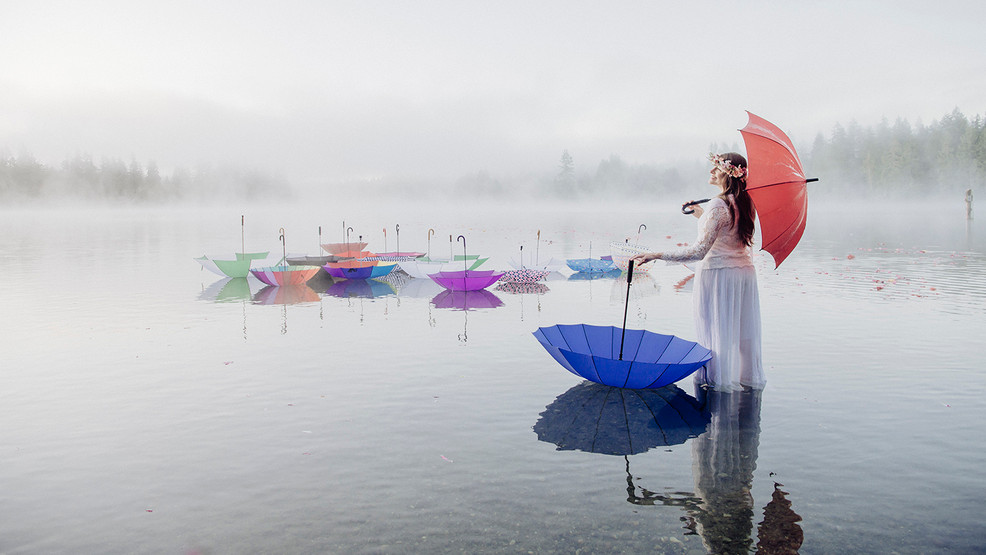 Bainbridge Island photographer Pete Saloutos recently made his annual appearance at the Seattle Cancer Care Alliance (SCCA) to give the calendars he designs and produces to the staff that saved his wife's life four years ago. It's no small token of appreciation. Sales of the calendars, filled with stunning landscape photography from around the Puget Sound and beyond, have raised more than $12,000 annually for Dr. Ed Libby and his team at SCCA.

"I wish I could write you a Bill Gates or Jeff Bezos-size check," Saloutous told the SCCA unit that treated his wife Aleta's rare form of blood cancer. "This is as deep as I can go into my heart and soul. I think people there feel that."

Saloutos, an award-winning commercial and fine arts photographer, works year-round on the calendar, painstakingly planning each shot and scouting locations, then patiently waiting for seasons, weather, light and tides to align. The results are arresting. The 2021 calendar features dramatic shots of a moonlit pier in Indianola, a stormy sunrise filtering light through Seattle highrises, and a sculptural, snow-blanketed Japanese garden in Bainbridge Island's popular Bloedel Reserve.

Saloutos always aims to evoke a bit of magic in his work and make images people will want to look at all year, even if they rely on electronic calendars to organize their lives.

"I try to make as much of an art statement with it as I can," he said.

The calendar's cover photo, for instance, features Saloutos' friend and swim coach April Cheadle, who appears to be standing on the surface of a misty lake holding a red umbrella. She's surrounded by a dozen more colorful, upturned umbrellas floating on the surface. The red umbrella is a motif of sorts, making another appearance on the April page.

The image that required the most persistence in the new calendar is a shot of the aurora borealis that Saloutos took in a remote fishing village in Norway a few years ago. His first attempt to capture the northern lights on a two-week trip to Iceland ended in disappointment — the lights never appeared. A journey to the Scandinavian town of Reine a year later yielded the stunning January image in the calendar — an effort that took 28 days and two international trips, Saloutos notes.

Saloutos started raising cash with calendars more than 15 years ago when a friend's ovarian cancer diagnosis landed her in a financial crisis. Those earlier calendars' proceeds went to the charity group Arms Around Bainbridge that he co-founded in response.

After his wife's cancer diagnosis and treatment at SCCA in 2017, Saloutos pledged all future calendar proceeds to her care team there. Aleta arrived at Dr. Libby's office that autumn in a fragile state, having secured the last appointment for the next three months. The much sought-after hematologist patiently spent hours with the family that evening, Saloutos recalls. Four years later, Aleta remains in remission.

"They saved her and got her back to relatively normal," Saloutos said. "I am sitting here humbled by what the SCCA has done — the kindness, the care, the expertise. I am just blown away by this whole thing."

The 2021 calendar is available in Seattle at Glazer's Camera and in Kitsap County at Town & Country Market, Eagle Harbor Books, RobyKing Gallery, Island Fitness and Poulsbo Running. Saloutos also takes orders directly via email. And if you can't get enough of the view through his lens, you can follow him on Facebook and Instagram, where he showcases his fine arts work and seeks input on future calendars. Or check out his award-winning commercial shots of the tunnel boring machine Bertha, which Saloutos captured over the five years it ground out a new highway under Seattle.