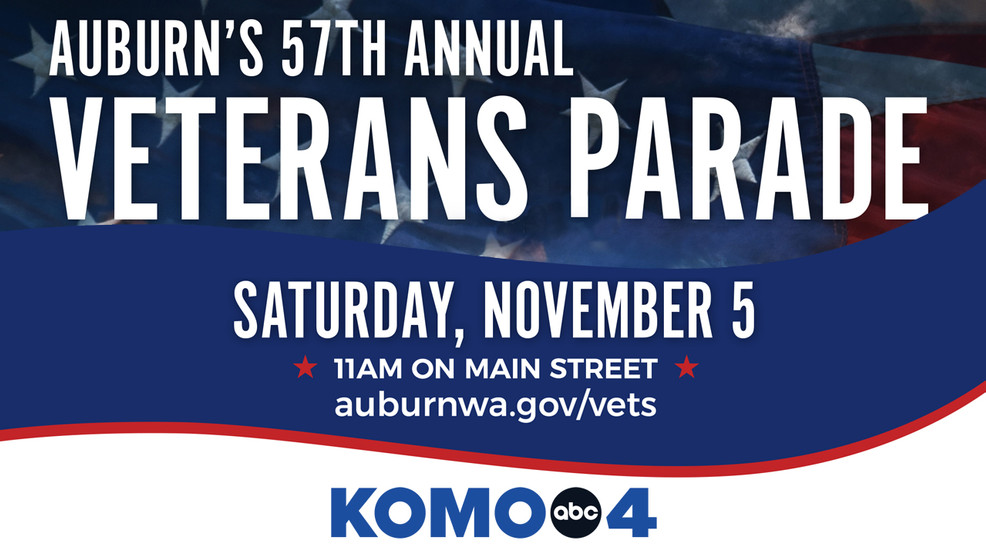 Join the KOMO 4 News team and the City of Auburn for the Veterans Day Parade Saturday, Nov. 5, 2022.
SEE MORE

The City of Auburn held it's 57th Annual Veterans Parade and Observance on Saturday Nov. 5.

You can watch the event below, where KOMO 4 News anchors participated in the big event. Click here to learn more and see who else was on the Parade line-up.

KOMO 4 News livestreamed the parade online and on social media hosted by Lee Stoll and Theron Zahn of KOMO News.

More on the parade from the City of Auburn:

"Auburn, Washington is typically designated by the Veterans Day National Committee and the U.S. Department of Veterans Affairs as a Regional Site for the celebration of Veterans Day. The City of Auburn is proud to be a Vietnam War Commemorative Partner and considers it an honor and privilege to host this annual event. Auburn has hosted the Veterans Parade since 1965. Now in its 57th year, the parade has grown into one of the largest parades of its kind in the United States of America.

"The purpose of Auburn's Veterans Parade & Observance is to positively focus on honoring our country's veterans and active military personnel. Through our parade, we focus recognition on congressionally-recognized Veteran Service Organizations and their auxiliaries, the military and military reserve, National Guard and ROTC. The goals and purposes of Auburn's Veterans Parade & Observance are to give honor to our country's veterans and to their military missions of defending freedom around the world.

We are currently planning for the 57th annual Veterans Parade to be held in Auburn on Saturday, Nov. 5, starting at 11:00 a.m. The parade typically boasts over 200 units and nearly 6,000 parade participants, including 25+ marching bands, military vehicles, veterans' units, honor guards and more.

"The parade route travels along Main Street from E Street to A Street NW/SW."