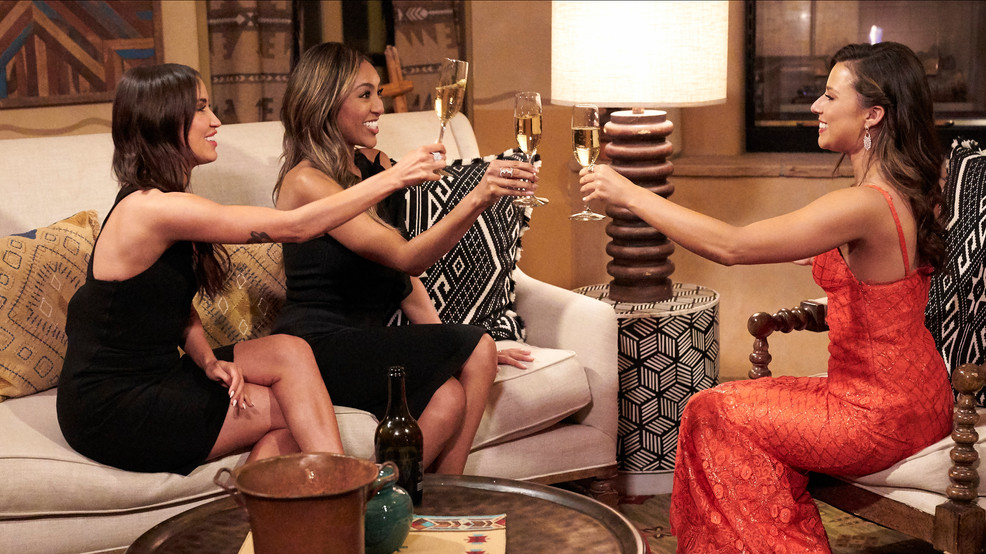 Bach, Please: No shortage of nerves (or sexual innuendos) to kick off the season

This season of 'The Bachelorette' is a big one for the PNW, as the Bach herself is Seattle's own Katie Thurston! We knew we wanted to cover Katie's ~journey~, but after a rocky year on and off-screen for the franchise — we wanted to do it differently. We polled our audience and found a group of five incredible women with diverse backgrounds to make up what we're calling our Bachelorette Collective. They'll be trading off every week to give recaps, commentary and perspective on Katie's season.

Let's be real, I am writing this as I am savoring a glass of rosé while I somehow convinced my husband that a charcuterie board was an actually good option for dinner. Basic? Bougie? Probably both.

Bachelor Mondays have been part of my weekly routine way before I had a baby and COVID-19 put our social lives on freeze. I watch the show as a guilty pleasure while obsessing and likely over-analyzing the relationship dynamics within the contestants, production and the franchise. As a first-generation immigrant, Latina and first-time mama (shout out to my 15-month-old daughter, Sigi), I seldom see myself in the contestants. Our voices deserve to be heard, and I want to challenge our traditional view and coverage of the franchise as we aim to push for more racial diversity and equity.

Before we dive in, we need to quickly address this: Does Katie have neighbors, and are they mad?! Katie announcing that she is "The Bachelorette" while wildly jumping on her bed and screaming really set the tone for the season. She's excited, and suddenly I am feeling excited too. And her neighbors, they are probably excited for Katie to be away for the next ten weeks so they can finally get some sleep.

Alright, thorny rose lovers, now that we got that out of the way, we can get started with Katie Thurston's premiere of "The Bachelorette."

"This season, get ready for a Bachelorette like we've never had before!"

Wait... what?! I don't recognize that dramatic voice, and I am already thrown off — breathe. Katie's "Bachelorette" season will undoubtedly take us on a journey of many firsts: this is our first season without Chris Harrison (and as of Tuesday morning, it's been reported he is no longer the franchise's host moving forward), our first season with two women guiding the process and also our first season with a blow-up doll named Sandy strangely lingering in the background. If you were hoping that the sexual puns and gimmicky limo entrances wouldn't be an emphasis this season, well...nope. There was absolutely no shortage of sexual innuendos this episode, and I'm already over it. According to the narrative we have seen so far, the two most important character traits that Katie possesses are that she owns a vibrator, and she doesn't like bullies. And yep, the show is really leaning into this.

The Hyatt Regency Tamaya Resort & Spa in New Mexico was chosen as the romantic setting for this season. And wow, the resort looks epic. But, the best choice so far — former Bachelorettes Tayshia Adams and Kaitlyn Bristowe taking over hosting duties for the season. I absolutely loved Katie's reaction to seeing Tayshia and Kaitlyn, their genuine connection, the abundance of good vibes while trading thumbs up and smiles as the men arrived, but most importantly, their hilarious commentary while loudly chewing popcorn. Chris who?! #threedesertgems

Anyways, we meet 30 maybe-husbands ranging from ages 26 to 36, definitely feeling like an older(ish) than the average age range for the show. There are so many dudes, but amongst my favorites, we get to meet our smitten kitten Connor B., a math teacher who enjoys playing his uke in the bathtub; Greg, an awkwardly cute marketing sales rep from New Jersey who presents Katie with the most charming gift of all time: a macaroni necklace made by his niece successfully securing the first impression rose; and James who shows up as a literal gift (and gave me major Bennett vibes).

We also get to meet Andrew S., who can definitely dance and is definitely cute, but you know what Andrew can't do? A good British accent. Amid the sea of men, we are also introduced to Jeff, the surgical skin salesman who showed up in a very grungy and disheveled RV (like you have been quarantining for two weeks but couldn't clean up?!). I'm still confused. At one point in the night, Greg takes Katie to the RV, hands her iced tea and proceeds to say, "Don't worry, I'm not going to bring you into an RV and give you alcohol and just try to show you the bedroom." Ew. That was so weird and creepy. No thanks.

And last but absolutely not least, there's Tre, a well-rounded, incredibly sweet software engineer from Georgia who showed up in a ball pit in the back of a pickup truck exclaiming, "You're a pretty baller Bachelorette!" He really rose up to the occasion. You got me, Tre.

And plot twist — Katie is not the only one to express nerves tonight. The guys are nervous too... like really nervous.

More than a third of the initial men were men of color, but race was not a topic at all during the episode. Disappointing? Yes. Surprising? Nope. However, there was conversation that indeed did offer a glimmer of hope. As someone who had their first child later than most and was never tied to the idea of motherhood, I loved hearing Katie discuss being open to not having kids. It for sure feels different than what we usually hear from our leads — and I'm here for it.

And we did it! So far, we know that Katie gets very nervous, loves cats, awkwardly shy dudes and is just a normal girl looking for love — and we so want that for her. Overall, I actually really enjoyed this episode, and I am hopeful that this was a promising start to a season that will deliver a genuine love story rooted in discussions that address our current social context in order to amplify voices of color.