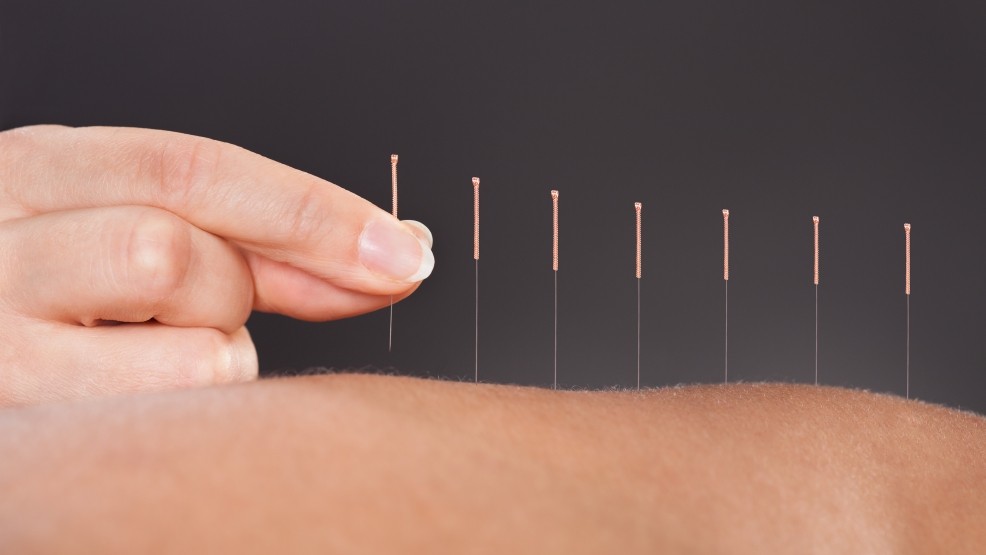 Acupuncture isn't as scary as you may think. (Credit: AndreyPopov)
SEE MORE

A Beginner's Guide to Acupuncture

Acupuncture. If you’ve never done it, the word alone could give you the skeevs...especially if you have issues with needles.

But I am here to tell you that there is nothing to fear of the ancient Chinese practice. Acupuncture is seriously a hidden gem of the medical world. Not only can it help you with MILLIONS (maybe an exaggeration, maybe not) of medical maladies you might be experiencing, but it genuinely feels like a trip to a spa, se très, zen.

I visited Avigail Cohen, a Licensed Acupuncturist at the Ballard Acupuncture Center to chat about the medical practice, and to indulge myself in a treatment. I’ll admit, I have done acupuncture in the past (so maybe instead of a beginner’s guide, we will call this a second or third-timer’s guide) and have always sworn by it, but it was so nice to get back in the saddle and I am most likely going to make this a frequent thang.

Let’s jump on in and get the basics out of the way before I dive into my personal experience and how ~fab~ I felt during and afterward.

What in the world is acupuncture?!

“Acupuncture is energetic medicine," said Cohen. "There are 12 energetic channels that run along the body, and the points are on that channel with over 400 points along the body. [The treatment] depends on the patient, for example, if somebody has pain, then we are looking for the channels that are often stuck. So we want to open the channel and have it flow.”

From my understanding, when someone has an injury or is experiencing high levels of stress, these injuries or energies (in Chinese medicine, this energy is called Qi, pronounced “chi”) get, for lack of a better word, stuck. Acupuncture needles work against this stagnation by disrupting that inactivity of qi in the body. So quick summary here – stagnant qi in the body = physical discomfort or a manifestation of stress in the body.

“Qi is energy. It is a life force. You can’t measure it or feel it or quantify it the same [as western medicine] but it’s energy,” said Cohen.

If you are a die-hard western medicine fan, I did some research about how acupuncture works from that standpoint. One major hypothesis is through “neurohormonal pathways” which stimulates nerves and blood flow to areas of pain.

As far as symptoms that acupuncture can treat or alleviate, the possibilities are endless. Avigail named only a few but if you popped that bad boy into a search engine, I have a feeling you would have lists on lists on LISTS.

“Acupuncture can treat almost anything which is really amazing. It does a lot with pain management, headaches, migraines, neck pain, shoulder pain, back pain, knee and joint pain. It can [also] help a lot with women’s health, like fertility – helping women get pregnant, during their pregnancy, through menopause," she said. "It can help regulate women’s menstrual cycles, cramps, and alleviate PMS symptoms. It can help with sleep issues, if [the patient] is having a hard time falling asleep or waking up in the middle of the night. It helps a lot with stress, depression and anxiety. Those things can really affect the whole body, and acupuncture is a really great way of managing and keeping things in check. It’s balancing the whole body.”

From this standpoint - how can you go wrong? Oh yeah, the common misconception that acupuncture MUST be painful because, duh, needles. If you have a fear of needles, this would understandably be a huge deterrent to trying the treatment. However, the needles are literally the size of one hair. They are TINY! They are also solid; unlike needles you see at the doctors.

“It’s not like an injection or shot where they are breaking the skin and then putting something in. That’s what people associate needles with because it’s painful when they are pushing medicine in or breaking the skin with a bigger needle. Acupuncture is really relaxing. Some of the needles you can feel a little bit but it’s really more relaxing than painful. The needles are actually going in pretty shallow, like maybe a quarter of an inch,” said Cohen.

“Some people can be apprehensive. New patients will be nervous, the unknown is worse, I’m like let me put the first one in and you’ll see and then [once it’s done] they’re like oh okay (shrugs).”

Story time with Gena, now! Here’s how the treatment WENT DOWN: Avigail sat me down and did a thorough evaluation of some things that I thought could be worked on. Lately, stress has been making a long and drawn out appearance in my life, and I knew I wanted to work on that. Along with stress, I have been slapped in the face this winter season when it comes to illnesses. In total, I’ve had about three colds, one case of tonsillitis, and a bout with a stomach bug. There may or may not have been a curse that was cast upon my home this season. Or it could be, my reluctance to get a flu shot DUMB. I’ll never do that again.

After taking all of my woes into account, I got situated on the table and the puncturing commenced, and believe it or not – it really was relaxing. Avigail swiftly (and almost undetectably) started poking the needles into my skin. A lot of the needles were on my feet and hands. No pain. Seriously – NO pain. The only sensation I felt was a dull numbing and tingling - maybe vibrating feeling? I’m a full believer that there was some MAJOR qi blockage all up in my body, so the vibrating sensation had to be the relief of that.

After maybe 10 minutes of needle placement, Avigail put a heat lamp on my feet, turned out the lights (besides one flickering candle in my periphery), and turned on the noises of the ocean, chirping birds, all the nature sounds that you want to hear.

Next thing you know – I napped. I napped, HARD. I know, you’re probably disappointed and wanted some dramatic ending because you know, NEEDLES. Nope. I fell asleep to the soothing sounds of the wild, and felt like I was enveloped in a warmness that rocked me right into ugly, drooly, baby sleep. It was exactly what the doctor ordered, no pun intended. I almost feel that it’s more relaxing than an hour massage, call me crazy.

So I went home, fell asleep and slept like a baby. Woke up in the morning and was in a fantastic mood, which is kind of odd, and throughout the day my mood continued to be better. I almost felt like a weight had been removed. I was reborn, starting fresh. My qi blockage was no longer stagnant and it was flowing like the river flows to the sea. Maybe it brought out a bit of a poet in me too? Who knows.

With that said, I’m going back and I hope I convinced you to try something a bit out of your comfort zone. Book your appointment now, folks. I promise you it won’t disappoint. And if it does – my qi apologizes to your qi.