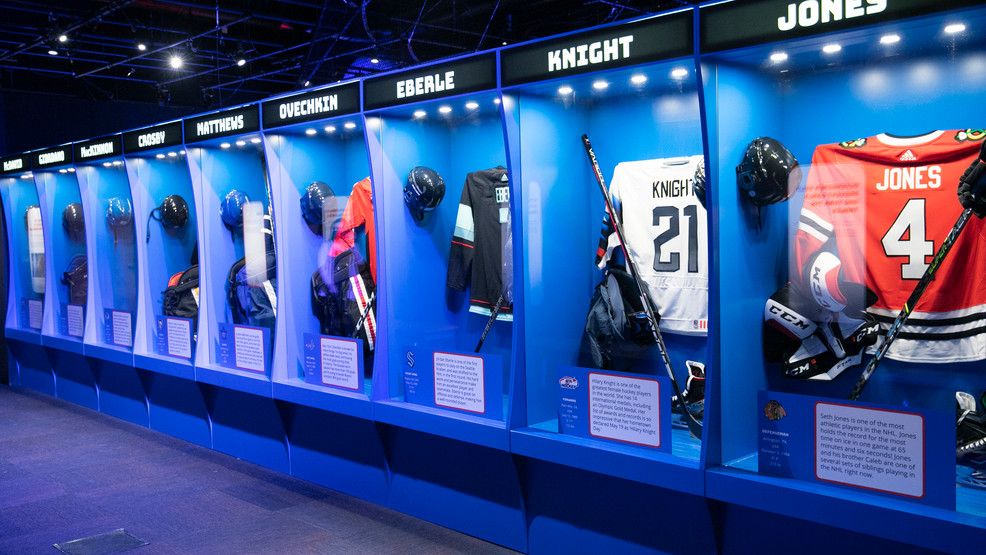 With the Seattle Kraken in the midst of its inaugural NHL season, hockey fever is sweeping our region — and they're celebrating at the Pacific Science Center with a new exhibition, "Hockey: Faster Than Ever."

"Seattle is a hockey town. It has always been a hockey town," said Liisa O'Neill, vice president of marketing for Pacific Science Center. "One of the awesome things we've learned through developing this content is just how great the hockey community is in the Northwest, and that's something that is really exciting to celebrate."

"Hockey: Faster Than Ever" features dozens of interactive elements designed to help hockey fans — old and new — learn about the science, history and culture of the sport. Pac Sci even partnered with the Kraken to develop an area devoted to local content. But, the exhibition begins with the origins of the game.

"It really starts out with looking at the history [of hockey]. So, obviously, the game started in Canada. Maybe not obvious to everyone. But, you can look at some of the sticks from the early 1900s, as well as what pucks used to look like, which were really just wooden blocks. So it's interesting to see how that has evolved," said O'Neill.

The locker room features the biggest names in hockey along with current Kraken stars like Jordan Eberle. Around the corner, visitors get a chance to see if they've got "professional-level skills."

"The hockey science lab is certainly a visitor favorite. To get in there on a surface that mimics ice, you have your stick, you're trying your snapshot," said O'Neill. "We've seen a lot of excitement and a lot of energy in the hockey science lab. Just seeing people interact and understand the science through actually engaging and doing it is really wonderful to see.

In the science lab, you can test your reflexes to see how many shots you can stop in a minute and, of course, clock the speed and accuracy of your slap shot (I can tell you firsthand, it's tougher than it looks).

Upstairs, the exhibition concludes with the local content Pac Sci created with the Kraken. It's a look at the future of hockey "Seattle style" and the franchise's commitment to an inclusive vision for hockey.

"It really focuses on this amazing diverse community we have in the Northwest of hockey fans and players, as well as the Kraken and Pac Sci's commitment to diversity, equity and sustainability," said O'Neill. "I hope that visitors to this exhibition come away more curious than ever, not just about the sport of hockey and the science behind it, but also how you can see hockey in everyday things and really asking why and continuing to be curious."