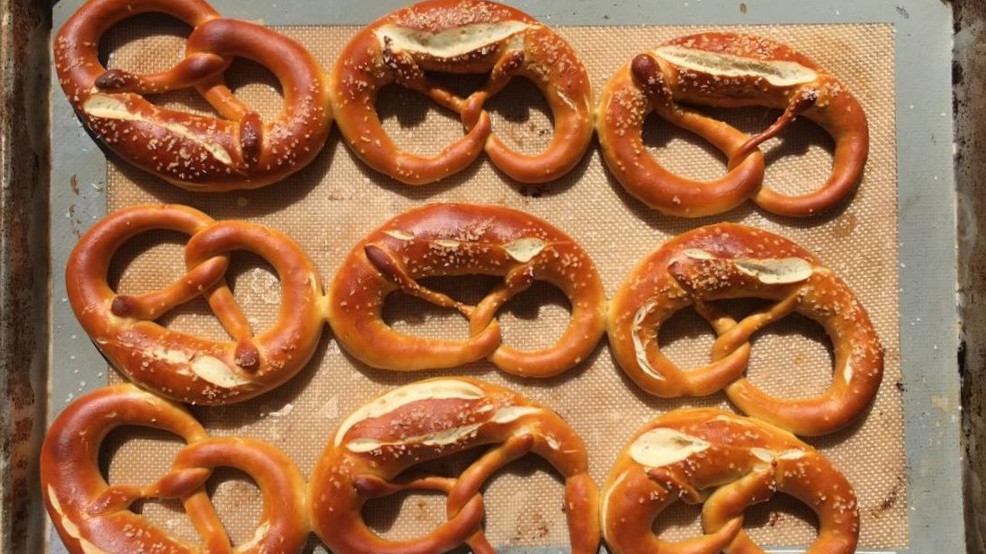 It's always a delight to trip across something new and unexpected in this city. So, the pretzel cart that recently started setting up shop at the corner of E. Pike and 17 Ave. is sure to brighten anyone's day.

The cart is appropriately named Laugen Pretzel, the German word for lye, which is an essential ingredient when making pretzels.

If the adorable little cart doesn't stop you dead in your tracks, the warm and chewy Swabian pretzels served out of it certainly will. And if that combo isn't enough, then throw in some signature stripy pants worn by the man behind the cart.

We're here to break down all three components.

For the past couple of Sundays, pretzel makers Johannes Brudi and Yasmine Abassi have quietly been holding down the corner near T.T. Minor Playground. Although neither are trained cooks, both Brudi and Abassi have been around food and hospitality their whole lives. And the story on how they met is one for the books.

"We met on the street," recalls Brudi. "I was choking on an apple and Yasmine performed the Heimlich maneuver on me. I owe my life to her."

Prior to rolling out their cart to the joy of passersby, they have been hard at work perfecting their Swabian pretzel. Which, to the perceptive pretzel lover, is both a chewy and a crunchy experience.

"Yasmine studied biology and has enough experience in the lab to figure out the perfect recipe," said Brudi. "It took dozens of batches and Yasmine filled a composition book with notes before we perfected the Swabian pretzel."

Baking Swabian pretzels has been said to be a labor of love. Unlike the ubiquitous Bavarian style pretzel, the Swabian is scored before baking, giving them crispy arms and a chewy belly.

"They take a long time to make because of their multiple proofing cycles," added Brudi. "Pretzels require a specific humidity otherwise they turn out wonky. You can get around this when making smaller pretzels, but with the large pretzels we bake, the dough has to be perfect."

Once the recipe was perfected, Brudi and Abassi started baking batches in earnest. As the warm pretzels were ready for prime time, they needed a way to get them to the people.

Last summer, Brudi would walk around Capitol Hill on weekend evenings with a rudimentary cart selling pretzels. He got some positive responses... and some heckling.

"At least it was better than any other work I had done during the pandemic," related Brudi.

But in the long run, Brudi knew that his prosaic cart would need an upgrade, something a little more special to match the pretzels they would be serving up.

The new and improved cart was built this past fall. And it's a looker. As Brudi puts it, "I figured if I didn’t build it, we would never sell any pretzels."

As bespoke as the pretzels, the cart includes shingles that were hand-carved from the cedar of a 100-year old demolished house in Capitol Hill.

To help build the cart, Brudi enlisted his brother Conrad. A musician and artist (Conrad and Johannes make up the folk rock band, The Brudi Brothers.) Conrad's handiwork work can be seen throughout, including the paintings of the Swabian pretzel and Adam and Eve that grace the cart.

Although he doesn't take part in the baking, Conrad helps out where he can. You'll likely find him a few feet from the cart with his sketch pad, "scratching" the scene. On our visit, we even saw him make a mustard run to his brother's nearby apartment.

When asked, Conrad does not hesitate to recall one of his favorite moments while helping out Abassi and his brother at the cart.

"For me, it was when a child tried a pretzel and proclaimed, this is better than snow!”