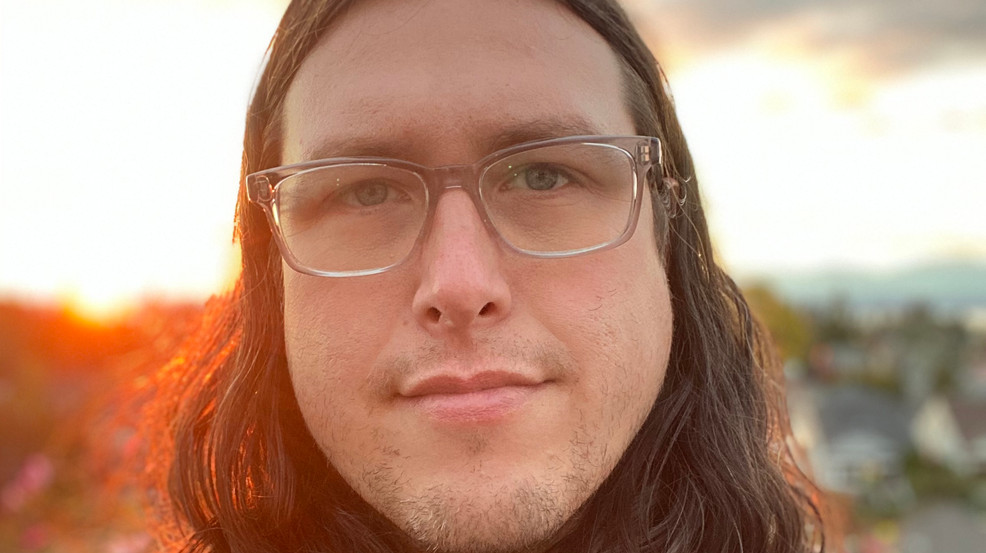 Local artist Fox Spears was born in Everett, moved to Magnolia and Burien, and then lived in Renton from age 10 until his high school graduation in 1996. Ten years later, he went back to school and earned a B.F.A. in Design from Cornish College of the Arts. He's an enrolled member of the Karuk Tribe — based in northern California along the Klamath River. Currently, he lives in West Seattle with his husband and cat.

Samples of his beautiful creations can be found on Instagram and his website. His work was most recently spotlighted on the ice rink during a Seattle Kraken game.

"I would say that my artwork falls into the Contemporary Native Art category," Spears said. "And while most of my work up to now has been 2D — mostly printmaking, but also drawings and paintings — I do also like to create 3D objects. I have a drum I made in 2020 based on the traditional square Karuk gambling drums, where I also used parts from an old Louis Vuitton bag I cut up that was really fun to make. The idea had been in my head for a while, so it was really nice to finally bring the piece to life." (That item is currently available at Stonington Gallery in Pioneer Square.)

Spears feels that Indigenous people across the U.S. and the world are often overlooked.

"The narratives and depictions about Native people in dominant society have usually been created by non-Natives and tend to rely on inaccurate stereotypes," Spears said. "So many Americans know very little about us and think of 'Native American' as a singular identity, when that term really refers to hundreds of individual and unique cultures. I don’t in any way consider myself an authority, but being Karuk is a big part of my identity and I enjoy sharing my artwork and what knowledge I have with others."

Art has always been important to Spears, who says a high school friend could attest that he spent all of math class making doodles and comics.

"I was drawn (pun not intended) to study design at Cornish, as I felt it was a good mix of the creative and the practical."

His degree had an emphasis in interior design, yet graduating in the middle of a downturn meant there weren’t many design jobs to be had. Spears filled various customer service roles for a couple years, including "a really fun retail furniture sales role at Room & Board," before joining the corporate world working in facilities operations positions for several vendor companies at Amazon.

"When the pandemic hit in early 2020, I was already dealing with burnout," he says. "So I ultimately ended up quitting my job in May of 2020 to rest and focus on my artwork."

While working full-time “day jobs,” Spears had continued making art here and there.

"The most constant medium for me over the last decade has been monotype printmaking," he says. "I first experienced printmaking when I was taking a summer course at Pilchuck Glass School while I was in college. They have a small print studio on their campus, and I immediately fell in love with the medium."

Spears did most of his printmaking at Crow’s Shadow Institute of the Arts outside of Pendleton, Oregon, on the Confederated Tribes of the Umatilla Reservation.

"My process has evolved over the years and is centered around monotype prints," he explains. "I’m generally working with torn newsprint and cut paper stencils to create my prints, and I don’t make additions; each print is one-of-a-kind. I’m really excited that in the fall of 2022 I will be doing a formal residency at Crow’s Shadow to work with the Master Printer (Judith Bauman)."

Since focusing full-time on his art, Spears feels fortunate to have had multiple large commissions and opportunities present themselves to him. He received a commission for Wells Fargo in summer of 2020 to make a painting that was then photographed and made available for customers to use as a debit/credit card design. It was called “Working for Generations,” and he was one of five Native artists involved.

This past year, he made a series of commissioned prints for Starbucks Art Program, and also created a mixed-media mural installation for Meta (Facebook) Open Arts at a new Bellevue office building.

"I’d been really wanting to make something large inside of a built environment, so I was really excited to have that opportunity come up."

When it comes to creating art to honor and celebrate Karuk culture, Spears says this can vary from piece to piece.

"But I generally am working to make art that is positive! It is important to me that I be in the right mindset when I am creating. I find that it is often easier for a non-Native audience to connect with my work as being 'authentically Indigenous' when I am working with traditional Karuk designs, but I really feel that all of my work is made through an Indigenous lens. Our traditional Karuk culture was built around annual World Renewal Ceremonies, some refer to ourselves as 'Fix the Earth' people."

The big projects he worked on in 2021 helped Spears understand how earth-based his work is, even if it doesn’t always read as such.

"These projects also really underscored for me how much of my process is intuitive," he adds. "When I’m working with more traditional Karuk designs and/or items, I do my best to find a good balance between my mind and my heart. I’ll let my brain make decisions about materials, colors and such, and then also let go and trust that what needs to come forward will do so in the moment. I tend to be more cerebral, but find that my best work often comes out when I let my heart lead. I really do view my artwork as a form of medicine—for myself, for my people and for the world."

"Honestly," he says, "the biggest way I feel that my art honors and celebrates Karuk culture is by existing! Some history: our traditional way of life was abruptly changed due to the California Gold Rush (1848-1855) and the ensuing genocidal policies enacted by state and federal officials. Our tribe was among many others in California who signed treaties with the U.S. government in the mid-to-late 1800s that were subsequently hidden and never ratified by Congress. (This is also why we do not have a reservation.) After WWII, there was a reduction and eventual discontinuation of federal services to the Karuk Tribe during the termination era of the 1950s. The Bureau of Indian Affairs eventually reaffirmed federal recognition of the Karuk Tribe in 1979."

Spears often tries to reinterpret Karuk Basketry art into modern-day mediums; the very first prints he made at Pilchuck were using triangles to depict mountains in simple landscapes.

"I thought about the triangles a lot, and the relationship they had with patterns I had seen on traditional Karuk, Hupa and Yurok basketry. (The Yurok and Hupa Tribes are also on the Klamath River in California and culturally share many similarities with the Karuk Tribe, although we each have our own distinct languages.)"

Eventually, Spears started translating some of the simpler basketry patterns in his printmaking more directly, even playing with geometric triangle designs that weren’t directly drawn from baskets.

Most often, he finds a compelling design on a basket and then makes a stencil of it for his printmaking, then creates a series of prints that incorporate that design in some way.

"What I love about printmaking is how you never really know what will happen until you run something through the press and then lift up the paper," he says. "Sometimes things don’t work as I hoped, and it just means more layering is needed. Sometimes I have tried something that ends up 'ruining' a print, and then it turns into a completely different piece."

When working with traditional designs, Spears feels it's important to pay extra attention to what he's doing — and how.

"It’s like there is an extra layer of responsibility in a sense," he admits. "I will often think about what goes into making a traditional basket, the days spent gathering and processing materials, the many hours of weaving, all to make one basket. I think of these artworks as being a way I can continue to connect with and learn from my ancestors. It feels like there can be ceremony in thinking about and then laying out a design, whether I’m going to cut it out of paper for a printmaking stencil or am working on a new drawing or painting."

Last summer, Spears was contacted by One Roof Foundation who asked if he would be interested in coming up with Kraken warmup jersey patch designs for their Indigenous Peoples Night game.

"It sounded really fun and interesting," he says, "and was part of a total of five planned Hockey Is For Everyone (HIFE) game nights."

Finding an idea he felt good about was challenging, yet things started coming together after an afternoon in a friend’s printmaking studio (Sheila Coppola of Sidereal Fine Art Press) making simple prints that he planned to photograph and then work with digitally as potential background layers. He used the full square area available for the patch, as he felt that referenced the shape of traditional square Karuk gambling drums.

"The color scheme was fairly easy to come up with as the Kraken’s official colors include blues and red, which are colors I am drawn to already," he says. "I brought the various shades of brown in to add more complexity and reference Native basketry in general. My aim for the design was to create an Indigenous interpretation of the Kraken logo that was in keeping with my visual language, felt bright and colorful, and would be easy to 'read' from a distance."

The original project scope involved only the warmup jerseys. They also had Spears approve concepts their designers made from his work to display on Climate Pledge Arena screens, and for temporary player nameplates for their lockers. After the warmup, players signed their jerseys (and the locker nameplates), and those were available during the game as part of an online auction to benefit One Roof Foundation. The final amount raised totaled more than $70,000.

"They also made an additional jersey for me with my last name on the back, which I still have," Spears shares.

The response to the designs were overwhelmingly positive, so they ended up also making hoodies, t-shirts and two kinds of hats featuring Spears' design to be sold through Kraken team stores.

"I hadn’t seen any of the merchandise until I went to the game on December 6th," he says, "and it was so cool to finally see the culmination of how everything had come together. That whole evening was so overwhelming (in a good way), and I was shocked when I saw it looked like they had sold out of the Indigenous Peoples Night merchandise in the Team Store as I was leaving."

More items have been made available online and in the Kraken Team Stores, yet many keep selling out.

In his downtime, Spears enjoys reading, going on walks and, in the summer, spending time outside in his hammock.

"In addition to making art, I also enjoy looking at art so it is always nice to visit a gallery or museum," he adds. " I joined the board of a local classical and chamber music nonprofit (Byron Schenkman & Friends) during the pandemic, and then just recently joined the board of Seattle Print Arts, so those also help to keep me busy."

We can't wait to see what this multi-talented Seattleite comes up with next.

Corinne is a freelance writer for Seattle Refined. Follow her work and adventures here.