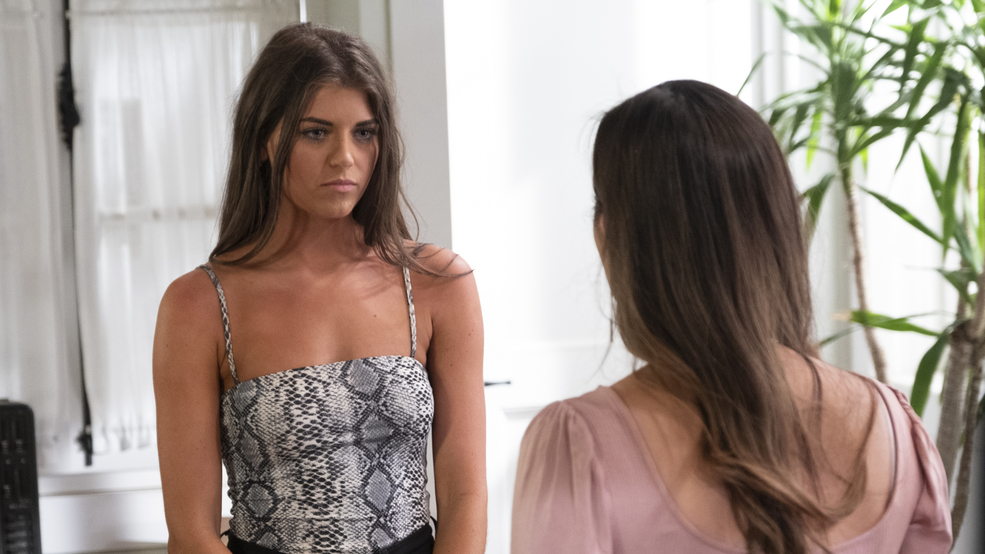 Brandon: Tonight on "The Bachelor" it’s what’s sure to be a dramatic Rose Ceremony, and the Women Tell All episode , always spicy. But we’ve got to talk about Fantasy Suites, because man they lived up to the hype.

Britt: So we pick up last week’s episode with a conversation where we, the audience, think we know what is going to happen. Madison grabs Peter, takes him off to the side, outside an airport hanger because remember, Peter is a Pilot. And you know they’re sitting down, she says she has something to tell him. We think this is going to be the moment that she tells him she’s saving herself for marriage. She has not told him yet and they’re going into Fantasy Suites week. Instead, she tells him in a roundabout way that she would have a big problem if he sleeps with the other women. And I think Peter is a little bit like - 'Wait, you know what this show is right?' That’s what his eyes say.

Jenna: Being straightforward is not one of Madison's strengths. I mean, she’s being really vague about what she’s expecting from this whole thing, so Peter walks away and - props to peter - he’s like, "I want to treat each One-on-One date exactly how it needs to be, a One-on-One date. So then we head to Australia and start the amazing dates, but something’s happened, for the first time in Bachelor history. Where in this portion of the show normally they isolate the women, this time all three women are sharing a hotel room, which gets real awkward.

Britt: Hannah Ann is first up for her date and possible Fantasy Suite, and these two have so much fun together. They really truly click. She is smitten kitten, and this point Peter seems the same. They go jet skiing, make out a ton and Hannah Ann even gives him permission to sleep with the other women, which again - this is a first in Bachelor history, it's usually kind of an unspoken thing that the Bachelor or Bachelorette is going to be doing what they’re doing on Fantasy Suites.

Jenna: Hannah Ann has probably the most clear-headed vision through this thing. Says something very straightforward, which is "I support you no matter what you do, Peter. If you don’t choose me. But I’m just glad we could spend this time together, I’m not going to be bothered no matter what you do." And I walked away like, you know what? Hannah Ann just moved up for me in the race, big time. Of course they agree to be in the Fantasy Suite together, which is not a surprise. They do a great make out montage where her hand is up against the glass straight out of a movie, so props to the producers for that one. Then we move forward to the next date, which is Victoria.

Brandon: Yeah we have to listen to Victoria’s voice for an extended period of time which is just on the whole a bummer.

Jenna: Peter really summed up the relationship perfectly at the beginning of the date when he talked into the camera. He said "I love everything about Victoria, except our communication skills." And that’s a huge red flag , Peter. If you guys are great together except for communicating, that’s not good. But I don’t really think he wants her because of the communication skills. I think he wants her because of that Fantasy Suite.

Brandon: Peter also says that he feels bad about not visiting Victoria’s family, which like dude, why are you apologizing for this. Again, you had an ex come to you and say she has essentially been a home-wrecker and he powered straight through it. It has not been brought up since.

Jenna: Victoria tries to excuse her behavior, saying she’s the way she is because she was in a bad relationship for the last three years and was never asked how she’s doing which - I’m sorry - that’s no excuse for how you were acting. And he kind of bought that lie.

Britt: I actually liked that part of it because I think, as Brandon said weeks ago, we don’t know anything about Victoria and we still don’t know anything - but now we have a little bit of nugget. When Peter asks how she is, she thinks 'Is something wrong? Should I be a certain way?' and I actually felt a little bit for her during their date at night. He was asking her questions like "No, really dig deep". I mean, therapists are easier on their clients than Peter was on Victoria! She’s like "I don’t know what you want me to say right now." Peter, just lay off. So that part I felt a little bit bad for her. Peter wants these deep, emotional conversations all the time and sometimes she doesn’t have the script he wants her to have.

Jenna: But she never addresses the elephant in the room, which is 'Why have you dated married men?' And 'Why did this woman come and give me a red flag about you?' So the fact this has never been addressed, and if it was addressed it wasn’t on camera. After all this, of course they decide to go to the Fantasy Suite together. You see them wake up the next morning, making out. You weren’t really sure where things went with Hannah Ann, but you definitely are sure where things went with Victoria.

Brandon: Hannah Ann says what we’re all thinking, which is if Victoria stayed it means they took their relationship to the next level. And guess what, she stayed.

Jenna: So then we go on to the most complicated One-on-One date, which is Madison. They have an amazing time. That date looked amazing. If you’re afraid of heights, you probably wouldn’t like that date, but it looked like they were having a blast. She even said she could see him being the father of her children. She is nervous about where the night is going to go, but then they have that deep conversation at dinner and that’s when she asks him point blank, "Did you sleep with the other women"" and it got real awkward real quick.

Britt: She finally tells Peter she's saving herself for marriage, and I could literally see the 'click' in Peter’s mind: "this is why she cares so much about intimacy, this is why she cares so much about whether I’m sleeping with other women." And again, let’s all be very clear here, I think we’re all taking Peter’s side like "C’mon Madison, this is 'The Bachelor'. That’s the way you play. But anywhere else this would be messed up. Anywhere else Madison is allowed to be upset that her boyfriend is sleeping with other women. In fact she even says, "So hypothetically you could propose to me and six days ago I'd know you slept with another woman?" Like yes, that’s messed up. And so part of this is this weird Bachelor world that we live in, but she also has agreed to be part of it as well.

Jenna: I completely disagree with you. I’m so frustrated with Madison. She should go on Christian Mingle, not "The Bachelor". Do you not know what you signed up for? You knew you were getting a guy that was probably going to be sleeping with multiple women. She one, saved it for too long and also that’s not fair to Peter. He’s literally trying to make these connections and she should not be on this show if she’s going to say you can’t do this. If you want to save yourself for marriage, then save yourself for marriage, don’t sleep with peter. But don’t ask him not to sleep with the other women. That’s not fair, that’s not what this show is about.

Brandon: I'm actually going to toe the line here a little bit. Because I give Madison a ton of props for standing up for herself and articulating her beliefs albeit late, in a very well-spoken way. At the same time, this is on Peter too because Madison did explain that if he were to sleep with the other women, there was a chance he could lose her - and he took the risk. I think he thought he could just get through it without talking about it and everything would be fine. And it is not fine.

Britt: Madison finds out he’s been intimate with these other women and she gets up and walks away and our "To Be Continued" moment is whether that’s a walk away for good, or whether or not she’s going to come back into the fold. And I think we’re going to get a little bit of an answer to that tonight, and then it’s right on to the sh*tshow that we like to call Women Tell All.