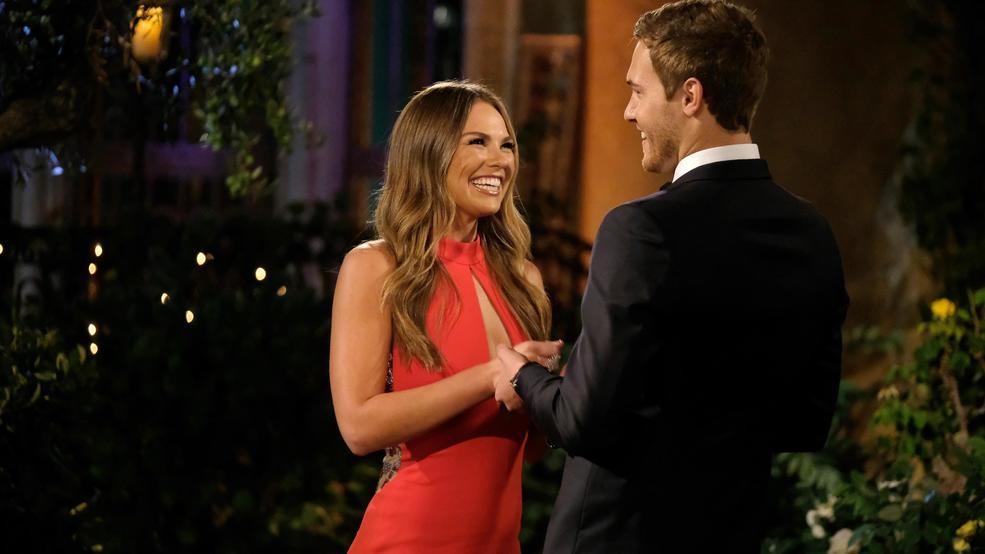 Rose Recap: How do we all feel about Hannah Brown's return?

Brandon: Tonight it is the dramatic conclusion to the premiere episode of the the Bachelor, and let me tell you, Peter’s season take off? A little bit rough.

Britt: Not you too. I can’t with all the pilot jokes. We get it, he’s a pilot. Is it that crazy? Almost every single woman who came out of that limo seemed to have some sort of pilot-themed joke. Like, come on.

Brandon: Quick shoutout to the woman who packed herself into the regulation-sized suitcase though. I don’t care how long she was in there, that’s an impressive feat.

Jenna: But the most shocking moment of the limousine portion of the episode was when Hannah Brown walked out.

Gena: I swear the moment she stepped out of the limo and he laid eyes on her? That look was worth a million words. He is still in love with her, it broke his heart all over again – it broke MY heart!

Jenna: I think Peter, when he saw her get out of the limo, was thinking ‘Maybe she’s going to join this season?’ And she ends up just kind of giving something back to him that he gave her on her season, basically saying “Good luck, here’s those wings you gave to me, God speed” and I think he was totally bummed.

Jenna: So he walks inside, collects himself, and now it’s time to really talk to the other women. My frontrunner at the beginning was Hannah Ann. When she walked out of the limo, that girl is gorgeous – you can tell his breath was taken away.

Gena: I have to say I wasn’t as triggered by all these interruptions as some of the peanut gallery here. I liked her! I thought she was bold.

Jenna: We fast-forward to the first Group Date which is, of course, pilot-themed. Kelly ends up winning the obstacle course by cheating, that was a big deal. Kelly now has a target on her back because of two things: 1) She cheated on the obstacle course, and 2) Apparently she met Peter before filming. Then we go onto the One-On-One Date with Madison, and that’s when you get your big frontrunner.

Brandon: Madison put together an all-time One-On-One Date performance. To get thrown into the deep end of the pool like she did, she handled herself extremely well.

Jenna: Fast forward to the next Group Date, and who's standing there on the stage but Hannah Brown, again. She gives the women an assignment, they’re off writing and doing their own thing, and then off in the corner is Hannah Brown crying. Of course Peter wants to go check on her, and the next thing you know they’re talking about why it didn’t work out between them, and do they have second thoughts, etc.

Britt: It felt super real to me, and I think the producers and camera people were lucky to have been where they were when it happened. She is saying, 'Wow this third runner-up really might have been the guy', and watching him and all of these new women, it hit her like a ton of bricks and she lost it.

Jenna: It wasn’t a good look for Hannah Brown, both physically and emotionally. Girl, you had your chance. You had two people that you blew through and now you’re going to make it this third dude? Like, give it rest!

Brandon: I felt exactly the opposite, and ultimately she’s realizing that her heart may have been with Peter the entire time. To me, there were sparks there throughout. I feel like if Peter ends up with one of the 30 women, and not Hannah, he will have been making the same mistake she did.

Jenna: No. Hannah needs to stay off TV. Do not go on “Dancing With the Stars” or “The Bachelor” anymore, go see a therapist. You don’t pick the right guys. Stay off TV. If he picked her right now and they started dating, it would only end up in a break up. Hannah Brown is not ready for a relationship, she is a mess right now. You are a beautiful person, but go see somebody and talk about. It.

Brandon: And the other 23-year-olds on this show are ready for a relationship? She is more put together than all of them combined. She was the most real person we saw on the show.

Britt: This is the Bachelor Roundtable 2020 folks, we’re coming in hot!