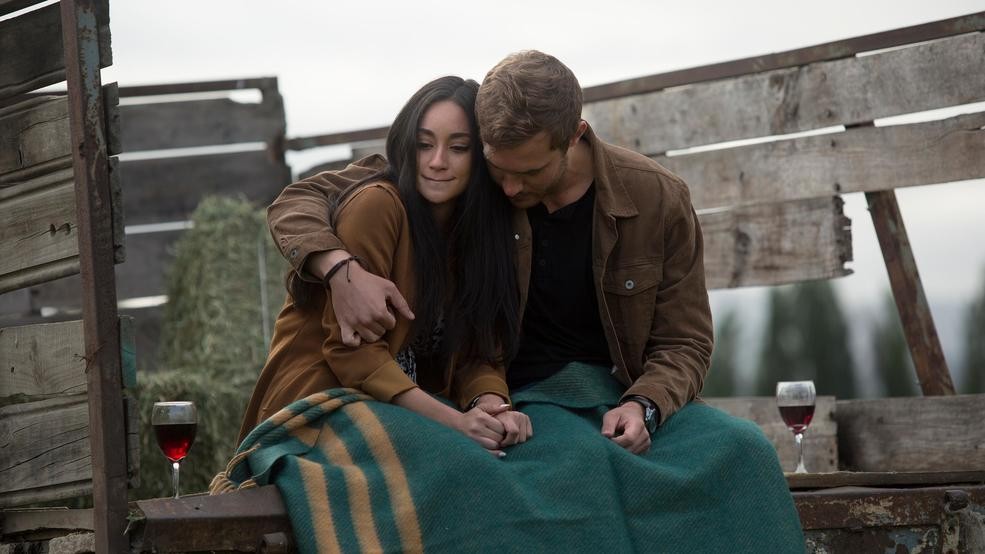 Rose Recap: What in the actual heck just happened

Brandon: Tonight on 'The Bachelor,' it is time for the Fantasy Suites - and it should be a dramatic evening. But before we get there, let’s talk about the Hometowns and man , one of them was an absolute dumpster fire.

Britt: The other three were actually normal - dare I say. First, we go to Hannah Ann’s hometown where they frolic around the city. They throw some axes because she wants to make sure Peter is man enough for her dad, because he’s a real man.

Brandon: Hannah Ann’s dad Rick was real star of this one-on-one date. Rick had some real talk for Peter. He was like 'Hey, don’t use the word love if you’re just going to break my daughter’s heart'. So you know what Peter did? Immediately walked outside with Hannah Ann and used the word love.

Jenna: So then we have our second Hometown Date which is Kelsey, and apparently wine tasting and wine is a big deal in Iowa. I had no idea. So they do the whole stomping thing in the grapes, and that was a little awkward for me. And then he even can name his own bottle of wine apparently, but he’s not that good at it.

Brandon: Peter has the worst naming skills ever. He – his creativity is a hard zero. Here’s the name for his bottle of wine: The Wine. Again - The Wine. Here’s where you’d find The Wine, it’s $3 and it’s available at 711. That’s not a fine bottle of wine. The wine is available in cans and you can get it in a six pack.

Jocelynn: From the get-go I’m already getting the vibe that Peter is not bringing the same amount of energy that he was with Hannah Ann’s date.

Jenna: So then at the end of it Kelsey says 'I love you'. And it is silence from Peter. He just leans in and starts kissing her. For me, that was a huge red flag that I don’t think Peter is as into this. So then we move on to the biggest frontrunner, and that’s Madison’s hometown in Auburn, Alabama. He gets an amazing hometown date because he gets to play one on one with Madison. And even gets a shoutout from Charles Barkley.

Brandon: Let’s be very clear, Madison knew who Charles Barkley was but Peter definitely did not. One thing that becomes abundantly clear though is that Madison is extremely good at basketball. Peter does not have handles. Madison can dribble the ball like a champ and she absolutely works this dude in one on one.

Jenna: Peter definitely doesn’t have game on or off the court.

Jocelynn: So then we go back to Madison’s home and that’s when we realize her family is super religious. You kind of get the sense her family is very worried about her, and whether she has explained her values and morals as far as her relationships go. And have questioned her about whether she has told Peter about what she feels about intimacy and that she is saving herself for marriage.

Jenna: I think that’s when you realize Madison has two cards she’s trying to play, get to know Peter and be real with Peter and also try to protect her religion and her family.

Britt: The entire night it seems like Madison talks with her family and her family is very worried about the fact she is saving herself for marriage – not worried about it, but worried about Peter’s reaction to it. Peter still has no idea about it. No one has told Peter this. But the number of times where values and ethics are brought up – to me that was a little bit of code for "Is he going to be okay with the fact you’re a virgin?" Which poor Madison is just like – I don’t really think it’s a headline for her.

Jenna: I think Madison was trying to tell Peter at the end of the hometown date, and they kind of alluded to the fact she just couldn’t muster up the courage at that moment. I think she’s waiting for Fantasy Suites to tell him that. Which is I guess a really good time to do that. So I think things are going to get really real tonight on the episode. But enough with Madison and the other girls, can we please talk about Victoria.

Britt: For the first time we see the two of them hanging out in a chill environment, having fun. Victoria has a delightful dog, that really endeared me to her and they seem – she seems a little bit more comfortable and relaxed than I’d ever seen her before. And I thought - okay this is going to be fine, this is going to be good. They go hang out on the beach with her dog, they go to her favorite bar where Hunter Hayes is randomly performing, which in my head I’m going - why does she have the in with all these country singers - but that’s a whole other conversation.

Jenna: I’m like, Victoria is going to have to really screw this up to not get a rose and I personally think she totally screwed it up. It was one of the worst Hometown Dates i’ve ever seen. Peter is trying to walk away and there’s a blurred face that shows up on the screen and says 'I need to talk to you Peter'. And it’s an ex-girlfriend that’s warning Peter about Victoria, saying 'I know things about Victoria' and technically she’s a home-wrecker. So as any normal person would do, Peter has to ask her about it. 'I don’t want to meet your family until we figure this out. I can’t just sit there and act like everything is normal'. So outside on the front porch, he goes 'I heard this thing'. And you would expect her to handle it maturely and she doesn’t. She gets really defensive. They get in another fight, this has got to be their 10th fight of the season. And at this point she storms off. She’s yelling at the cameras. She doesn’t want to hear it, she doesn’t want to be rational about it. And you’re like 'fine, finally Victoria is going home'. He doesn’t even meet the family. She cries to her Mom and off he goes into the sunset. And you’re like 'okay great we’re finally done with Victoria', but we’re not.

Brandon: Victoria straight up gaslights Peter. I mean, Peter brings up a legitimate point that is worthy of a conversation and she immediately flips the script and blames him for everything. What he was doing was wrong. And then Peter soaks it up and buys it. The guy has zero backbone. I don’t understand what he’s thinking.

Jenna: The next morning a knock at the door and it’s Victoria. She’s like 'I’m so sorry, I didn’t handle myself right, I want to stay here'. And he’s like 'I need to think about it'. I’m like - okay he’ll just send her home at the Rose Ceremony. He doesn’t.

Jocelynn: I am absolutely confused about the fact that Peter and Victoria did not have conversation in the hotel room to clarify what his ex said to him about her.

Britt: They’re in the motel room and Peter is like here are my red flags: we have absolutely no communication, you walk away all the time, we fight all the time. And he’s listing out all the things that we as the audience have been seeing for weeks and we’re just thinking 'Yes, Peter is having this come to Jesus moment. This is it'. And at the Rose Ceremony I think we’re all still thinking that. Victoria can’t even look up, she’s looking down the entire time. She’s got this grimace on her face, she’s not giving him anything and she gets a rose. She gets a rose again.

Jenna: I’ve never seen a couple fight like they do. And the way that she handles it, and the way he keeps coming back like a little puppy. I mean America is not only hating Victoria but they’re hating Peter. Nobody is rooting for anything. We just want to see how this whole train-wreck plays out. And so tonight, huge episode. Who he’s taking to the fantasy suite. Who’s going to go. We know Madison probably won’t but I think there’s probably going to be some major drama that comes out of the Madison storyline tonight.