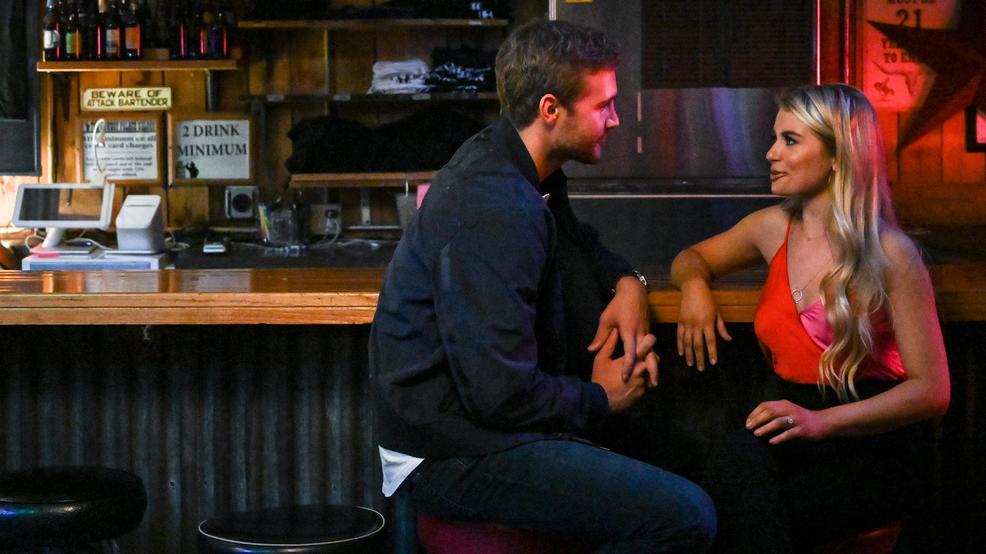 The "Champagne-gate" controversy continues to bubble and fizz as Hannah Ann and Kelsey attempt to try and bury the hatchet but only succeed in making matters worse. Meanwhile, Peter concentrates on having fun, going country line dancing with one smitten kitten, Victoria P., and Demi Burnett masterminds an "Extreme Pillow Fight Club" group date that sends feathers flying. However, Peter needs to confront his fear of falling for someone whose feelings aren't genuine early on and struggles with his rose decisions... The Bachelor airs Mondays at 8 p.m. on KOMO 4. (ABC/John Fleenor)
SEE MORE

'The Bachelor' Breakdown: Return of the Demi

This week, we open to a serene, beautiful morning in southern California. The sun is shining, birds are chirping - wait. Those birds sound kinda...whack. Is that really chirping?

No folks, no. The audio editors of the show have done it again, and what we are hearing are the nasally snuffles of Kelsey, who is still crying about her champagne problems from last week. Pan to Hannah Ann, who is also crying because "I'm Not A Champagne Stealer!!!"

A week has passed for the rest of the audience, but for these ladies the hurt and despair of another woman stealing your champagne is fresh, and pipin' hot. Hannah Ann is very disturbed about her sterling reputation being ruined on this show if it gets out that she's a Champagne Stealer ("I'm NOT!") and Kelsey is beside herself that she is now coming off as a bully. The two sit down to talk, where Kelsey drops a couple of interesting gems:

Wow. Thanks Kelsey for taking us all on the ride of a lifetime, get us invested, and then come to find out you don't care. Feels greeeeeaat. I don't know about you guys, but I walk away from this disliking Kelsey even more. So it's actually a blessing when we hardly see her for the rest of the episode.

Peter heads out on a One-On-One with Victoria P., a sweet girl who just gets even sweeter as we learn more about her, if you ask us. Peter takes her to his hometown, which would have been a bigger deal if they weren't 20 minutes away. I tell ya, the Bachelor producers are really milking this whole "Our Bachelor lives 20 minutes away" thing. Think of all the budget they're saving on dates! We better get some pricey destinations later on in the season, is all I'm saying...

After a little line dancing, Peter and Victoria P. have dinner in a warehouse with planes, because - in case you forgot - Peter is a pilot. Peter learns a little bit about Victoria's past: her father passed away when she was younger, her mother battles addiction, and she and her sister were in and out of shelters. It's a raw moment, no music in the background, very honest and genuine - something we don't get a ton of on this show. Peter holds his own by not saying anything, and just looking pretty in awe of her.

Same Peter, same. She's been through a lot, and is still (seemingly) incredibly joyful and positive. She and Peter click on a deeper level, and after this conversation Victoria P. inches up the list of frontrunners, in my book. She is also the first woman in the house to tell the camera that she's falling in love with him.

Back at the house, we've left the depth, thoughtfulness and real life issues behind. While we've moved on from champagne, we're back to the age old Bachelor Question: Who is here for the Right Reasons. The stars of the Season 22 version of this question are Alayah and Sydney. Alayah is a trope we've seen on this show many, many times before: pretty, beauty queen, put together, attention seeking, and apparently turns it "on" when the cameras are around. Sydney is the Righteous Defender of the season (there'e always one), who has decided it is her duty to save Peter from the bad, bad, women in the house (like Alayah) who could possibly hurt him.

Demi (originally from Colton's season and then a shining star on Bachelor in Paradise), comes back to the Mansion for one day to plan a Group Date where the ladies beat each other up. I mean, with pillows - but still. What could possible go wrong? Of course, Alayah and Sydney are pitted against each other - and a shocking amount of violence is put into a fight that's supposed t be "fun"! Though Sydney gets in a couple whomps, Alayah pulls ahead as the winner and she couldn't be more delighted that Peter has now seen another side to her than the "perfect beauty queen". The number of times she's referred to that side of her...don't get me started. Sydney is a pot-stirrer, but I'd be PO-ed in a house hearing that all day long too.

The Sydney and Alayah drama just starts escalating more and more, but passive aggressively - not like Hannah Ann and Kelsey (though it's a very, very, similar storyline what with all the "pretty princess" talk). Peter sits down with Alayah, who attempts to be "vulnerable" with him, but it just comes off as rehearsed. Maybe it's her beauty queen training, maybe it's a defense mechanism, maybe it's because we just Victoria P.'s shot at honestly with Peter, which looks way - way - way more legit, FYI.

It all escalates when Sydney straight up tells Peter that she thinks Alayah is fake. Peter takes this super seriously, and - unlike his Bachelor and Bachelorette predecessors - confronts the whole group to see if they agree. No one but Sydney pipes up (in a super awkward moment), and Alayah feels vindicated after some one on one time where she puts his mind at ease that she's truly here for him, and she has no idea where this all is coming from.

We all think it's squashed, until Victoria P. - who Peter has just had a wonderful time with and has weight with him - takes him aside to tell him that before the show, Alayah (who she knew from the pageant world) asked her not to tell producers that they knew each other. It made her feel uncomfortable to be asked to lie.

Now we are back on the roller coaster with Peter, who cancels dates and takes over the pool party to interrogate each woman, one by one, to see what they think of Alayah. Turns out, no one likes her - everyone thinks she turns it on for the camera and is a little fake.

Peter is crushed. You can tell he really likes Alayah (he has a thing for beauty queens, remember). Alayah is floundering, trying to dig herself out of the hole she's found herself in - but it's too late and the cards are stacked against her. In the final Rose Ceremony, Peter sends her home.

And then immediately regrets it. You can hear him whispering to producers that he wants to go back out and get her. Peter dude! You still have over two dozen women in the house, and you're already flip-flopping? Doesn't bode well for you my dude...

In a teaser for next week we do indeed see that Alayah comes back, in some capacity - whether to stay or just get one last shot at Sydney and Victoria P. - we'll have to tune in to find out...