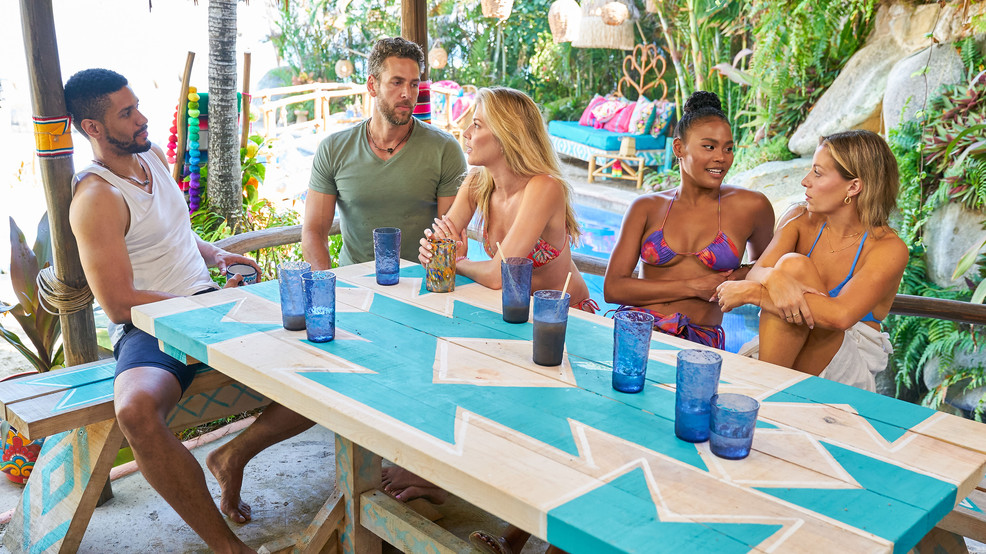 Week 2 of 'Bachelor in Paradise': Things are moving quickly on the beach

Did anyone else forget how exhausting it is to have FOUR hours of "Bachelor in Paradise" each week? Phew!

I get it. Really, I do because there are so many people and so many couples already — so let's get into it.

Episode two on Monday started out with the one and only Victoria Fuller, from Pilot Pete's season, showing up on the beach. Of course, this makes the women nervous, especially Genevieve Parisi, who was currently feeling Justin Glaze. Shocking to no one: Fuller comes down with a date card and asks Glaze, who accepts. Parisi is furious. But, my boy Glaze, who is a sweetie, talks to Parisi first and said that he would want her to go on a date if asked to make sure they really do have a connection and it's not just from being the first person they met on the beach. Which, to me, makes 100% sense.

They go on their date, and it goes well, and when Glaze tells Parisi afterward, she essentially says she is no longer interested. It was all very dramatic. While I am all for women setting their boundaries, she had only been talking to him for like 48 hours...I get things move quickly down there, but the number of people through these two episodes who were distraught over people they just met was bizarre. But they also had this conversation on her birthday...and that is just rather unfortunate.

A newly established connection I am all here for is Michael Allio and Sierra Jackson. Allio, who is a widower and a father, is too pure for this franchise, truly. He must be protected at all costs. He and Jackson shared a touching conversation during this episode about his feelings about moving on after the loss of his wife, and Jackson was very receptive. You can tell this woman is an A+ active listener. They share a kiss. I absolutely love these two together so far.

The Salley debacle was absolutely a waste of our time. We have enough drama. We really did not need this. The suitcase? The adult toy? Wells' recap? Spare me. But, it looks like we will end up seeing her on the beach next week, and there was *a lot* of talk about her and Glaze at the Stagecoach Festival — of course, Stagecoach makes an appearance on the beach. Would it really be "Bachelor in Paradise" without some sort of Stagecoach drama?

Biggest flop of the week goes to Romeo Alexander, who was also involved in some love triangle-esque drama in week one. My guy...what are you doing? Alexander approached Brittany Galvin about pursuing a connection, and she said she would be open to it if he talked to Jill Chin first, who he was already pursuing. Major kudos to our girl Galvin for that. Well, he didn't and instead leaned in for a kiss, which she hilariously rejected. This led to a whole meltdown between Alexander and Chin — he followed her to her room, left and cried in the ocean. You really cannot make this up.

We end with the rose ceremony cocktail party, where Alexandar asks every available girl if they will accept his rose, and they say no. I mean, it's painful to watch at this point. He ultimately gives his rose to Chin, who said she will accept only to pursue other men. Brutal, but fair. We get into the rose ceremony with the start of episode three, which aired on Tuesday, which led to three women — Kira Mengistu, Hunter Haag and Hailey Malles — not receiving a rose and leaving Paradise.

I'm not even going to get into the Ashley Iaconetti Haibon and Jared Haibon coming back to the beach of it all because it was just unnecessary.

But, because I am a girls girl, you know I get excited every time women have the roses for the week, which is exactly where we are at the end of this week. This also means more men show up.

Of course, Bachelor Nation's favorite bromance Aaron Clancy and James Bonsall show up, who we all remember, left Paradise together last year. They have a double date card and decide to take Parisi and Shanae Ankney, who notoriously hated each other during their time on Clayton Echard's season. Because that's reality TV, baby.

The biggest get of the week? Rodney Mathews from Michelle Young's season. Every single woman on that beach was excited to see him walk down, as they should be. I can't wait to see his journey this season. This also leads to the big surprise upset this week: Teddi Wright leaving the beach after deciding she ultimately was not into Andrew Spencer. I hope he finds another connection because I really do adore this man.

I totally understand not wanting to pursue a relationship when you realize it's just not there, but why did she leave?! And she didn't even tell her friends? It was just all so bizarre. I feel like there was something behind the scenes we did not see. Like, at least say goodbye to your girls!

But when Mathews shows up, he wanted to go on a date with her, and the episode ends when they tell him she left. Who will he choose? I guess we'll find out next week! We're left with some solid couples — Brandon Jones and Serene Russell, for example — and, of course, some mess, and that's exactly where we want to be. It is "Bachelor in Paradise," after all.

'Bachelor in Paradise' airs on ABC Mondays and Tuesdays at 8 p.m. PST.