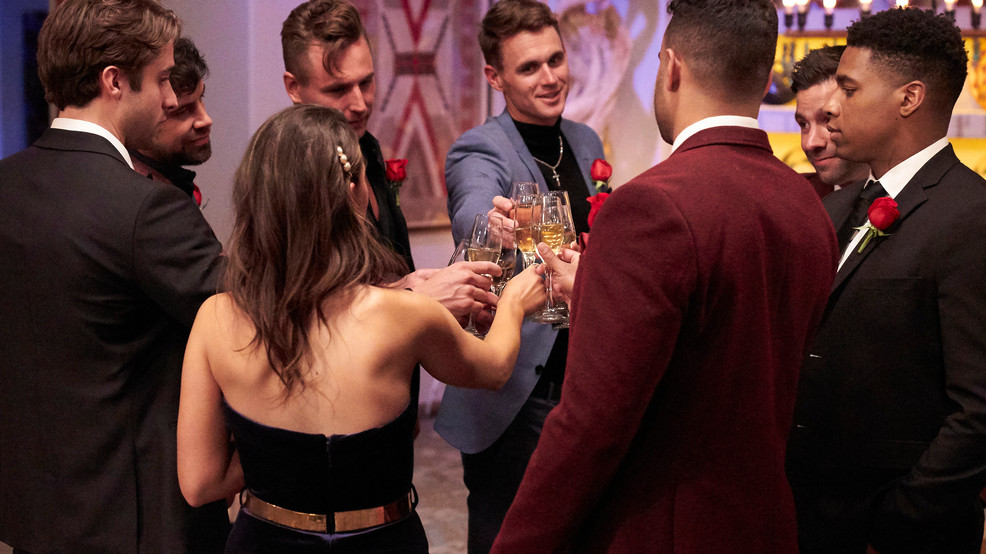 Bach, Please: And then there were seven

The last time I was here was about a month ago when Thomas was still just an innocent tall guy with a big smile, Karl was the enemy of the house and there was still a potential doll named Sandy on the premises. A lot has changed since then: we've said goodbyes, we've deepened our love for some (hey there, Michael A. and Greg) and we've grown attached to our Bachelorette lead, Katie.

The first date of last night's episode was a one-on-one, and it goes to Justin. If you need a reminder, don't feel bad: Justin was the guy who painted Katie a very impressive rose on night one. With Franco, our resident Bachelor Nation Photographer, facilitating, the date turns out to be a favorite in the Bachelor-producer bag of tricks — stage and photograph a fake wedding. Justin and Katie sit on a cool, vintage-looking couch that has been carefully placed in the woods to chat about their relationship for all of about two minutes (at least that we see) before they split up to write their individual vows. I felt a little bit bad for Justin, who received a tall order from Franco: "your vows have to be marvelous, iconic and like nothing we've ever heard before." That could not be more to ask given these circumstances!

Suddenly, we have an altar, a wedding dress, a tux and two cuties on a first date ready to get married! Katie walks down the aisle to an awaiting Justin, who delivers his vows first. I can't say that they seemed to meet Franco's standards, but I don't at all blame him. Katie makes a painting analogy in her vows that gave a nice personal touch, although very cheesy. They smear cake on each other's faces, take some pics, the whole shebang. I definitely prefer this date to any date involving physical fighting, but if the fake wedding got moved out of the date rotation for a couple of seasons, I don't think I would mind. Bachelorette creative team: if you're hiring, I'd love to pitch a few date ideas that don't involve mud brawls or fake vows.

At dinner with our "newlyweds," Katie shares with Justin that the date was difficult for her in some moments, as it reminded her of the loss of her dad, even when walking down an imaginary aisle. Katie also shares that somewhat recently in her life, she learned that the man she grew up with as her father is not actually her biological father. She told Justin that her biological father wants to be in her life now as a dad, but that when she tries to get close with him, it only serves as a reminder of her loss. Wow. This is real-life, really intense stuff.

Katie gives Justin the rose, and the two of them enjoy a private performance from the artist MAX. I'm sorry, I have to ask: is the artist's real name Max? If so, is MAX really at that first-name-only status? You know, like Beyonce status?

Next up is a group date, with all the remaining guys there except for Justin and Connor B. (one-on-one forthcoming). A couple of important shoutouts — first, to Katie for her fabulous 80s look at the date, and to Monét X Change and Shea Couleé, two drag queen extraordinaires and winners of "RuPaul's Drag Race All Stars" seasons 4 and 5. It turns out that Shea and Monét are here to assist the men in the ancient art of "throwing shade"or, to those of us unfamiliar with this very important term, giving out insults that hit that sweet spot of funny, intelligent, unapologetic and a little risqué.

To get the ball rolling, Shea and Monét ask, "Who is the least compatible with Katie?" The guys mumble Hunter's name, adding that he has been going around the house discussing his "top four" list of guys he thinks will make it in the show. Hunter denies it, even though we saw a clip of him calling himself, Greg and Connor B. as forerunners earlier in the episode. Not a good look. Shea and Monét then ask, "Who is the biggest try hard in the house?" "Hunter!" The chorus sings! Hunter doesn't try to throw any shade back and instead makes a plea to Katie, telling her that he is falling in love with her, even though we also heard him tell Shea earlier in the date that he wasn't there yet. Oof, Hunter.

At the cocktail party that evening, Katie starts out by saying, "Tonight, for some of you, the connection that we have isn't enough, and it's time for you to show me otherwise." In other words, it's that point in the season for the tough but necessary pre-Hometowns spring cleaning.

Cocktail party highlights include Katie telling Greg that she is falling for him, and he has Hometowns written all over him. Katie and Blake share a moment that made me thoroughly uncomfortable, James (turtleneck diehard) tells Katie that he is concerned about Hunter, and Tre and Aaron also share concerns about Hunter with Katie...Does anyone else feel like Aaron and Tre's entire relationship with Katie is them reporting to her which men are here for the wrong reasons?

After the accusations, Katie and Hunter check in. Hunter tries to tell Katie that he is not being calculated, that he doesn't want this drama for her, that he's sorry, blah, blah. Something is definitely off about Hunter — he approaches the show like it's a season of "Survivor." Katie takes some space for herself to process, but super, unfortunately, has to run to the bathroom because she's going to be sick. Hunter, that may be your cue to hop in a limo home. Like a champ, Katie comes back to face the group, but only to call the night and let the guys know that she'll see them at the next cocktail party.

And then we're at our last date of the evening, one-on-one with Connor B. Before the date, Katie admits that she doesn't feel a passion or spark with Connor when she kisses him and that "this is the final test of the relationship." Connor, on the other hand, seems to have no idea that Katie is having these doubts as he prepares for what turns out to be a double date with co-host Kaitlyn and her fiancé, fellow Bachelor Nation alum Jason Tartick. The couples have a blast playing games, and Jason and Connor tend to the barbecue (gender roles, over it) while Katie and Kaitlyn stand and chat. And, as we all held our breath to try and read Katie's body signals, she and Connor shared what Katie has essentially described as her make-or-break kiss.

The suspense doesn't last long. While a giddy Connor gets ready for dinner — telling us he's falling in love with Katie and wants to share it with her — Katie remains in her comfortable clothes (a bachelorette in sweats is rarely a good sign), looking pained and pacing. Katie walks to Connor's bedroom, where they sit on the couch, and Katie tells him she isn't where she needs to be in their relationship. She tells him that when they kissed, something was missing. Connor is going home, and while Connor fans can be sad, this show has (what I think is) a damaging way of making it seem like any two people in the world could have an immediate romantic spark when of course, this isn't true. Katie seemed to genuinely respect and appreciate Connor, but she wasn't feeling it on that level, and there's no shame in that!

For all real fans of the show, what came next was a shocking moment — Connor actually got to say goodbyes to the guys in the house (photographic evidence pictured in Katie's tweet above). This never happens! Did anyone see when Michael A. kissed Connor on the cheek while hugging him goodbye? That was a total pause, rewind and rewatch moment. I love you, Michael A. It's an emotional goodbye. Tre is practically sobbing, Hunter is crying and the guys seem stressed as Connor makes his exit.

And then, Blake has the audacity to leave the group, find Katie and hold a stereo outside of her window playing country music. Blake, go away and let Katie feel! I didn't find that romantic. I found that annoying. He comes up to her room and tries to express his concern for her tonight after the hard Connor B. decision by saying, "I was thinking about you in your sweats, crying as you explained." What? Creepy! Honestly, I don't know what to make of Katie being into Blake because I feel like Blake is manipulative, immature and every time he comes on screen, my heart rate picks up. I guess only time will tell?

Instead of thinking about Blake, I want to think about Michael A.'s face when Katie enters the cocktail party on the night of the rose ceremony. I think this may be one of the few appropriate times to use the word "smitten." Katie tells the guys that she's at the point where time isn't really going to make a difference: she knows what she wants to do, and the cocktail party is canceled. However, once all the guys are in Rose Ceremony-formation, Katie pulls Hunter outside to talk (what happened to having all your decisions, girl?) Their conversation lacks substance, and Katie is ready — roses go to Blake, Andrew, Greg, Michael, Mike P. and Brendan (that last one was a bit of a surprise), and we say bye-bye to Hunter and the rest of the men.

Is anyone else shook that next week is already week 7!? With so little time left and so many strong contenders (still smiling at you, Michael A. and Greg), I personally have no idea how this is going to resolve. Katie, your season is keeping me up at night, girl! Good luck to all of us as we try to live our lives this week without obsessing over next Monday's episode!