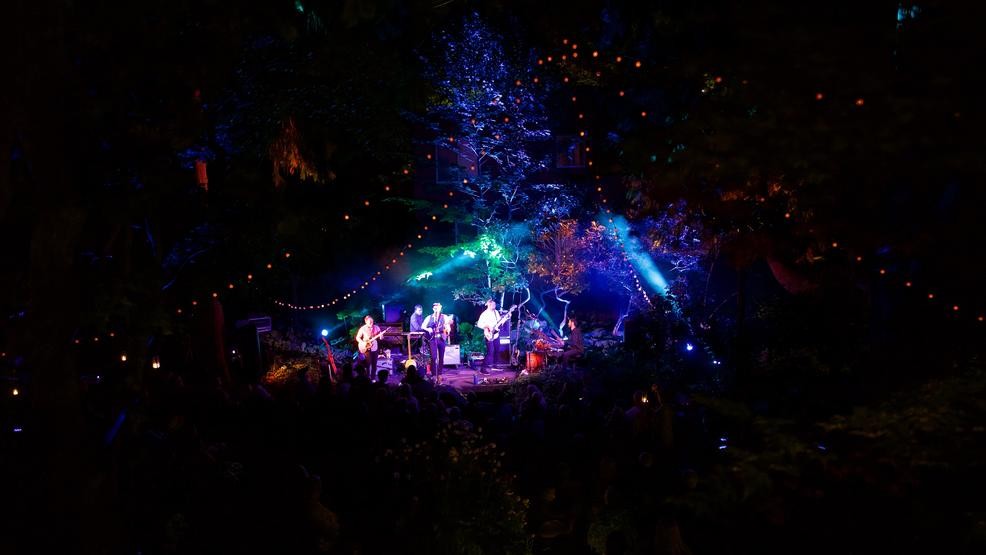 Seattle Refined: How long has the band been around/writing together/performing?
Nick Drummond: We’ve been performing together for about three years now off and on. Our drummer Ehssan Karimi pieced us together when I asked him who we should get to come play my solo album live. He suggested Mark Mattrey on bass, Cole Schuster on guitar, and through them I got to know keyboardist Joe Doria, and once we started playing together we very quickly realized we had something that could extend well beyond the scope of my solo material. We spent the last year and a half writing an album together that we’re really excited to share, and I think walks the fine line between a studio record and a band that formed around playing live shows.

Tell us about the artistic process and the different stages that work into it
I’ve come to realize that my process is generally hedonistic; I’ll be either be like a monk doing my own work for long periods and limiting distractions, or I’ll be out trying to make the memories and mayhem that are worthy of singing about. It’s a beautiful gift being able to write music with such a vibrant band, because even when I feel like I’ve painted myself into a corner lyrically or squeezed every morsel out of my brain, they’ll throw a curveball at me that’ll inspire me in an entirely new direction. Sometimes it works and sometimes it doesn’t, but I can’t overstate the value of getting to work with such wonderful musicians.

Where does your inspiration come from? What other musical artists do you take inspo from?
For me, it comes from emotional richness, exclusively. It doesn’t have to be tragedy or loss or sorrow, it can be joy and youthful exuberance, it can be hunting for the best parts of oneself, wishing the best for those that are dear to you, or the obvious anger at where the world is headed. The thing I’ve found is the writing doesn’t really work unless I’m emotionally "turned on” by the subject, or by the lens I’m using to view it. I sometimes believe that good songs already exist out there in the beyond, and my luckiest moments have been when I connect to that place and can channel those ideas. But those are the very rare days, when ideas seem to arrive fully formed.

Beyond that, it’s a multi-layered process: There’s the purity of the original impulse, there’s the writing and rewriting to make sure the words are right, and then there’s making the whole thing come together to hit like a truck. I get quite giddy and childlike as the pieces click into place, and if it’s done well, hopefully there’s a universality inside the words and sounds that is accessible and people can connect with. My favorite example of an artist that does this exceptionally well is Guy Garvey of Elbow. He’s had the most impact of anyone on my songwriting, hands down.

What kind of genre is your music? What kinds of things do you write about?
I think you’d call it rock music, but it’s built with players that are brilliantly accomplished in their various backgrounds - mostly jazz and funk - so there’s a lot of movement and groove as well. I like to make songs that feel like they have their own gravity; like you’re entering a different world with its own rules and customs, but where things still feel familiar. When we shake it all together I think we end up with something pretty exciting, and where the musical personalities of each musician really shine through. Someone recently described our music as “Paul Simon with muscle” and that’s such a lovely description that I don’t dare to argue.

Do you have one song that means more to you or is extremely special to you?
The title track of the album, “Eye of the Storm” - there’s a lot of myself inside that one. I was working on the lyrics to another song, and all of a sudden I was turning the page and this poem came out. The sub-conscience has a way of showing up unexpectedly, and sometimes it seems to predict the future months or years ahead of time. For me, this song is a prayer - both for myself and for the connections I wish to have with others. There’s a real magic in falling in love at the right moment, in the right place, with the right person, and this song is an attempt to honor that profound colliding of worlds. The words just came out of me, and that’s what is on the record.

It’s such a simple little song, too - it’s just two chords. The day I wrote it I sent a demo to the band saying “I wish hidden tracks were still a thing because I think I just wrote one.” Our bass player Mark wrote back saying, “That is NOT a hidden track.” He was right. It’s the title song for our album.

What experiences in your life have shaped your music/art?
What hasn’t? Everything colors everything else, which is why I think there’s joy and hope in the shadows of breakup songs, and why there’s longing and sorrow even in the most joyful and optimistic music.

If we want to see more of your work where should we go to find? What about upcoming shows?
Our next show in Seattle is 3/14 at Sunset Tavern. Tickets are selling now, so grab them quick. www.nickdrummond.com has links to everything. The album is available on Bandcamp and everywhere one usually finds music. I’m also playing solo in The Round at Fremont Abbey on 4/14, which will be a beautiful evening.

What is next for you? Anything you’re working on right now that you’re really excited about?Right now I’m just excited to be playing live. Every time I walk onstage with this group of musicians is like Christmas morning for me. Making an album is a wonderful and fulfilling experience and I love it, but I also love getting to take new songs out and let them stretch their wings and breathe. This music is in such good hands with this band that I can’t wait to take it out and see where it wants to go.

Lastly, how do you take your coffee? We ask everyone!
I’m an americano guy. With dual citizenship.