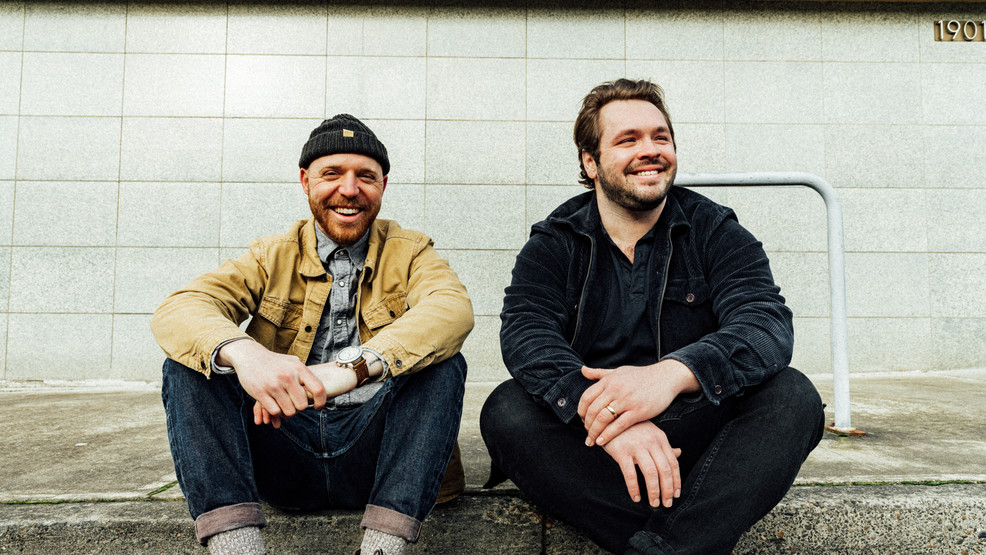 Seattle might be notorious for niche coffee shops and scenic waterways, but locals know it's also home to an array of people who love to create. This city is chock-full of artists who we love to feature weekly on Seattle Refined! If you have a local artist in mind that you would like to see featured, let us know at hello@seattlerefined.com. And if you're wondering just what constitutes art, that's the beauty of it; it's up to you! See all of our past Artists of the Week in our dedicated section.

Seattle Refined: How long have you two been a duo/writing together/performing?

Kyle Armstrong and Nick Roldan of Barbara Volk: Believe it or not, the two of us have known each other since the 1st grade. We picked up our first instruments in middle school and have been playing together in some way, shape, or form ever since. Grade school plays, high school jazz bands, college rock bands, you name it. The first song we wrote was called "Roadside Traveler." We recorded it on a Windows '98 computer with a desktop microphone. Needless to say, the audio was atrocious, but felt like an achievement nonetheless and gave us that "Wow, we can actually write lyrics and put a melody to a song" sorta moment. After that, we were hooked.

Barbara Volk as a group, as in choosing a name and running with it, came together in the fall of 2019, but prior to that, we had been making music as a duo for quite some time. We had a handful of songs that we had been working on from afar, so when Nick had moved out to the Pacific Northwest, it only felt right to pick up where we left off.

Tell us about your artistic process and the different stages that work into it.
Melodies have a way of drifting through one ear and out the other. The hope is that you're ready to capture them when they show up. Voice memos, notes, using what you have in front of you to preserve that small spark. Sometimes that's in the middle of the night, and you get up like a crazy person to try and jot down whatever it is that's there. Sometimes you're out for a walk, and inspiration strikes. While most of these sketches inevitably wind up on the cutting room floor, the few that do last seem to give you some trust in an otherwise pretty unorthodox process.

Once you have the idea, the next challenge is to put the thing together. Sometimes this will take us an hour, sometimes a week, or sometimes even years where we'll return back to an idea and think, "Oh, that was cool, maybe we can do something with this." The two of us will generally shoot ideas back and forth over texts, videos, or FaceTimes. Sometimes the lyrics come first, sometimes a riff or a melody. In the case of "Shouldn't I," we came up with the intro piano melody, and the rest seemed to fall into place. We've been making tons of demos as of late, which definitely allow us to experiment, try things out, and see if they stick. Overall, it feels like it's been a pretty effective method and has given us some freedom to layer & build things out in ways that we wouldn't have been able to do before.

Where does your inspiration come from? What musical artists have influenced or inspired you?
Inspiration seems to come from just about everywhere. Each of us is bouncing through life, absorbing information from where we live, who we interact with, the places we go (or don't go, after this past year). We both tend to be pretty observant and often write about what we're seeing around us with no real end goal other than that being our way of processing the day-to-day. While we're obviously adults now, the two of us met while we were kids and still carry with us some of that funny, lighthearted sense of humor. While the songs found on our new EP are ones we took the time to carefully develop, craft and put together, we write a lot of funny songs on the side as well for the pure sake of our own amusement. We'll save those for another time.

Lots of music inspires us due in part to the two of us being nerds of sorts about music history. We were both raised on classic rock – Beatles, Paul Simon, Bob Dylan – and inevitably bridged into a deep reverence for blues & soul music as well – Ray Charles, Bill Withers, Wilson Pickett, Elmore James, Otis, Aretha, Nina, you name it. As kids who spent hours on end playing with a handful of other musicians, we quickly became versed in improv music but have always had a deep love for songwriting. The ability to translate words on paper into a song has a certain mystique to it, a puzzle of sorts that you're trying to figure out, so being able to do that with your own thoughts and melodies still to this day feels special.

What kind of genre would you consider your music? What do you write about?
On paper, we're a retro-inspired soul/indie-folk band, kind of "solk," really? That being said, we tend to pull from a lot of different genres depending on what kind of songs we're working on – jazz, funk, blues, soul, rock, gospel, etc. In the case of "Bluebird," we were inspired by 50s rhythm & blues but wanted to take the lyrics to a place that felt more whimsical, fun, and storytelling-driven with melodies that were a bit more modern-inspired. The two of us write a lot in general, often about everyday feelings, observations, and the subtleties of everyday life. We have a note in our phones called "Words for the Birds" that's honestly just words, thoughts, whatever comes to mind. Most of it never really makes it into a song but always serves as a valuable resource. You never know when you'll find a line here or there that works out perfectly with a melody or a song needing some lyric love.

Do you have one song that means more to you or is extremely special to you?
Kyle - I'd have to go with "Colors." The idea itself was inspired by a walk through the city last year, just a couple weeks before the world would change drastically as a result of the pandemic. As I strolled through downtown Seattle, I observed people of so many different places/cultures/backgrounds and was reminded that we're all still here working towards something. Whenever the world tries to knock us down, we do what we can to get back up and keep moving. Weeks after the country shut down, Nick and I got together again and knew we wanted to write something that could give us some glimmer of hope during such a dark time. We decided to revisit "Colors" as it felt more relevant than ever and were very pleased with what we ended up with.

Nick - "Gimme Your Love" was a special one. It was a hook I had come up with a handful of years back but never really felt like something we'd share out with the world. Funny enough, upon moving out to the Northwest, it was one of the first songs Kyle and I dove into. The song itself came together in 15 minutes. The idea of that indescribable, but only "feelable," bubbly emotion of attraction towards a person, whether you know them or not, felt like an awesome thing to try and bring to life in a song.

What experiences in your life have shaped your music?
The two of us went to grade school, high school, and college together and now still hang in our adult lives, so as you can imagine, there are too many shared experiences to count! Even the name "Barbara Volk" is referential to a figure from our pasts. When it comes to songwriting, we're very much a second brain for one another and creatively often pick up where the other left off, which is something that's easy to take for granted, but wouldn't it have any other way. In addition, we're both very lucky to come from music-loving families who have supported us over the years and remain close friends to this day. There's no way we'd be where we are today without them.

If we want to see more of your work, where should we go to find it? Any upcoming projects/virtual performances?
Spotify, iTunes, YouTube, Instagram, you name it. While the end goal is, of course, to get out and play for everyone again once time allows, we're working on a few virtual shows for the upcoming months. Working to share some dates soon!

What is next for you? Anything you’re working on right now that you’re really excited about?
We're actually working to put together another EP as we speak! We have too many demos to count at this point + a handful of new songs that we've been working on, so planning to jump into the studio later this year.

Lastly, how do you take your coffee? We ask everyone!
Kyle: If it's hot, just a shot of espresso. Otherwise, anything iced!
Nick: Cold brews in the summer. Black coffee in the winter!